text and photographs by Masakatsu Ikeda

Da Vittorio is a long-venerated eatery opened in 1966 in Brusaporto near Bergamo, a quaint village a mere hour drive from Milan. Commanding 3 Michelin stars since 2010, it is well-renowned as home to some of the most deliciously-prepared seafood in all of Italy. Da Vittorio takes full advantage of the culinary possibilities of fermentation technology unique to Japan and Hanamaruki Liquid Shio-Koji in particular. Recently an exclusive dinner party was held at this illustrious establishment for a select group of Italian journalists and chefs. 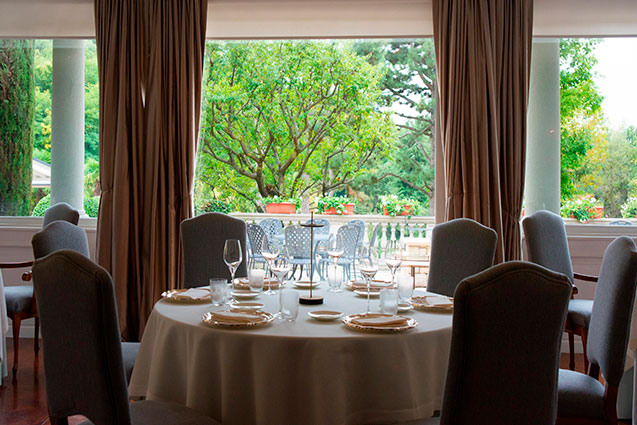 Da Vittorio, Milan’s closest 3 star restaurant, is located in the rolling countryside outside picturesque Bergamo and is surrounded by desperately beautiful vineyards. Late founder Vittorio Cerea and wife Bruna began their humble journey in 1966 as a local eatery that specialized in simple seafood fare. Due to issues with delivery, the very idea of eating fresh seafood in the Milano suburbs was unheard of at that time, yet Vittorio was able to procure the freshest bounty of the sea through special deals with fishermen around the port of Venice. The restaurant’s reputation for excellence spread quickly and in 1978 were awarded their first Michelin star for excellence. The second came in 1996, but tragically Vittorio passed on before witnessing the third, conferred in 2010. Thankfully his family carried on the tradition with Vittorio and Bruna's five children taking the reins to Da Vittorio and even now, more than 50 years after its inception, the chef’s vision of fine cuisine is thriving. 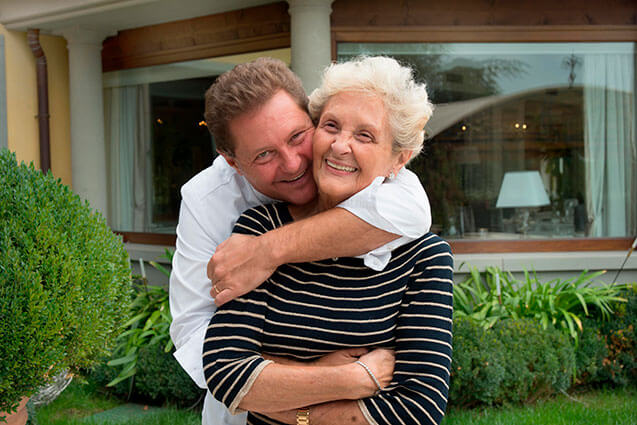 Enrico Cerea, eldest scion of the Cerea family and executive chef known to his devoted team as "Chicco," has wielded his wealth of experience in Japan and Japanese cuisine to become one of the best and brightest new chefs in Italy. Enrico’s current obsession is Hanamaruki Liquid Shio-Koji. 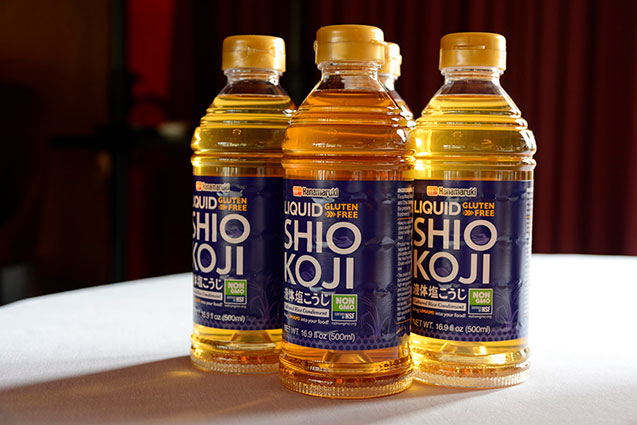 At a recent invitation-only dinner party, an unofficial debut was held for Hanamaruki Liquid Shio-Koji, which featured prominently on the menu in a variety of exciting new dishes, delighting the gathered collection of foodie journalists and chefs from Bergamo and Milan. Partially due to an influence felt from Scandinavian gastronomy, the concept of self-fermented dishes has recently seen a surge in popularity in northern Italy, and Milan in particular. Top chefs in the region have adopted time-honored fermentation methods for fruits, vegetables and grains to explore new vistas of taste and aroma that were heretofore completely unimagined. It was in these uncharted waters of gastronomical discovery that Enrico caught wind of the possibilities for Hanamaruki Liquid Shio-Koji, a unique seasoning originating from Japan. 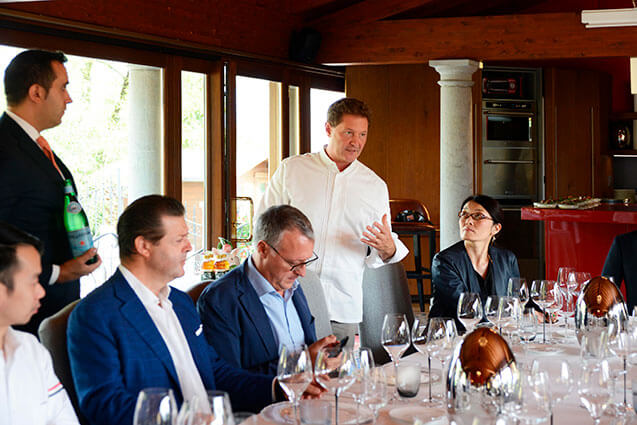 On the day of the event, Da Vittorio gathered together 15 eclectic stars of the Italian food world, including Gabriele Zanatta, a journalist from Identità Golose magazine, wine critic Orazio Vanyozzi, and Chang Liu, chef of Celica, a up-and-coming restaurant that has tongues wagging in Milan. The excitement for the guests that had converged in the private dining room with attached kitchen on the secluded second floor was palpable. How would dishes from Italian cuisine pair with Hanamaruki Liquid Shio-Koji? 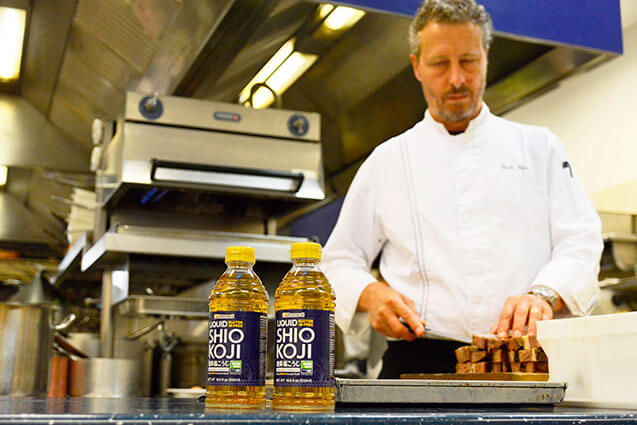 For this premier event, Enrico utilized two types of Liquid Shio-Koji, standard and low salt. Both contain only 3 ingredients: rice, water and salt. Rice koji (malted rice), also an ingredient in miso, possesses the remarkable effect of extracting umami when reacting with protein and sweetness when reacting with starch. A surprising additional feature is it suppresses odor and acidity with other food ingredients. Enrico incorporated Liquid Shio-Koji in all seven dishes of this special menu, which ranged from appetizers to dessert. One knot to unravel was determining the proper amount of time for marinating. While not yet attaining perfection in all dishes, through trial and error, the coveted sweet spot was successfully found. He believes that with more experience, he will be able to further perfect its usage in the future. 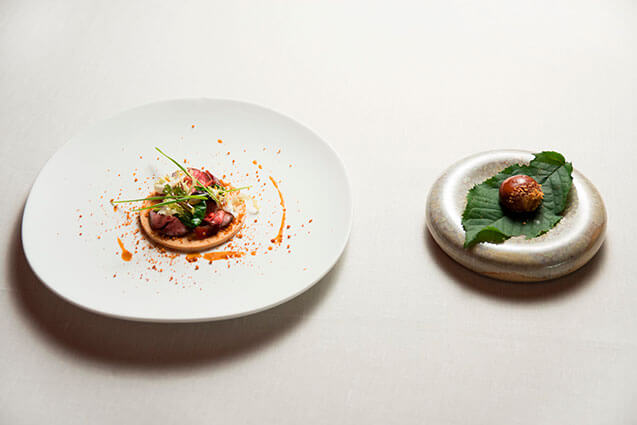 Foie gras marinated in Liquid Shio-Koji. Typical marinades usually stretch from 7 to 8 hours, but Enrico opined the working time could be greatly reduced to as little as 1 hour for this dinner. This first dish captivated the imagination of Orazio, a wine critic, who continuously declared "The smoothness of this foie gras is not to be believed!" 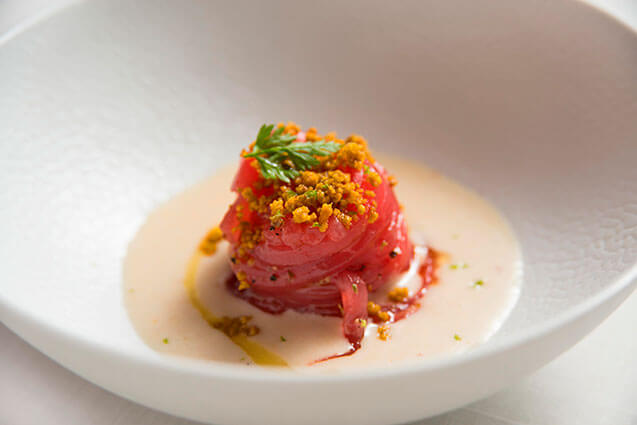 Reddish tuna with less fat was marinated in Liquid Shio-Koji, julienned, and arranged as pasta to serve. The smooth texture and sweet richness of the tuna came to the forefront, reminiscent of if it had been marinated in soy sauce. The current specialty of Da Vittorio is the updated version of marinated tuna. It finishes with a texture distinctly smoother than its predecessor. 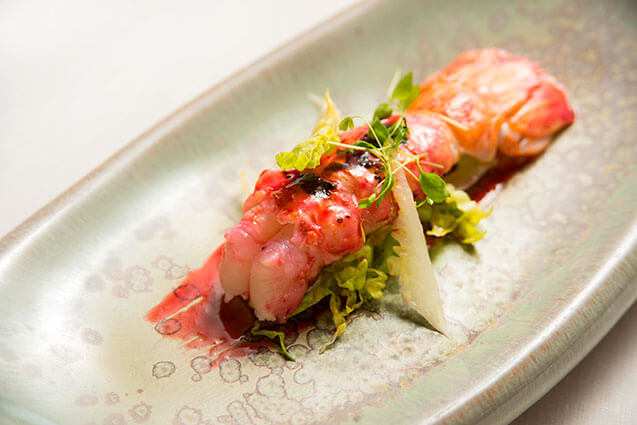 The large scampi had a melt-in-your-mouth texture despite its freshness, and the contrast when paired with the crispy lettuce was decadently comforting. “Liquid Shio-Koji also matches brilliantly with all types of crustaceans," says Enrico. The fresh yet tender texture was an unexpectedly welcome surprise from everyone. 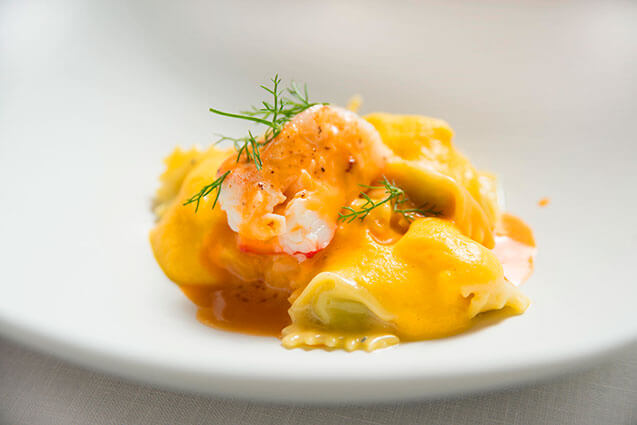 Ravioli plin stuffed with blue cheese, was combined with a sweet spuma concoction made with crab, pumpkin and Liquid Shio-Koji. Finally, even more Liquid Shio-Koji was added to the sauce as spuma. This is a bold combination of Dolce Salato. 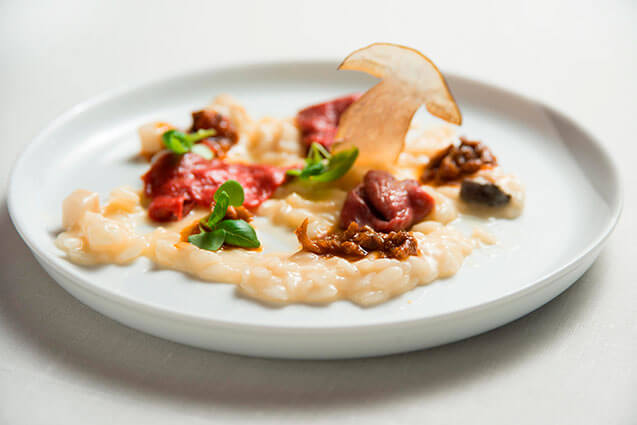 An unheated pigeon was marinated for 10 minutes with standard Liquid Shio-Koji. Typically it’s a challenge to use raw pigeon, as it tastes strongly of iron from the blood, but after a quick 10 minute marinade with Liquid Shio-Koji, its pungent flavor and unique texture become apparent. Chef therefore was able to showcase Liquid Shio-Koji’s odor-eliminating ability with this special dish. 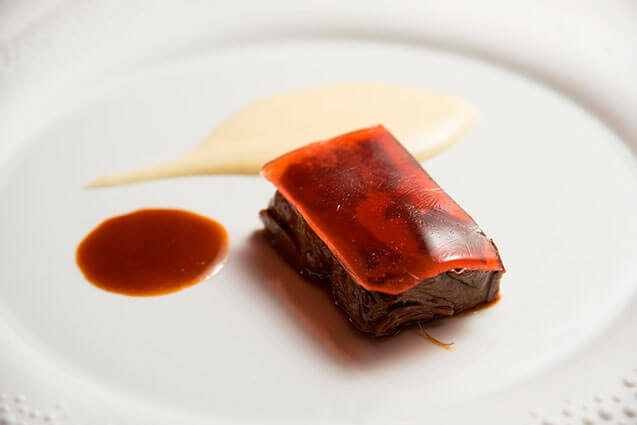 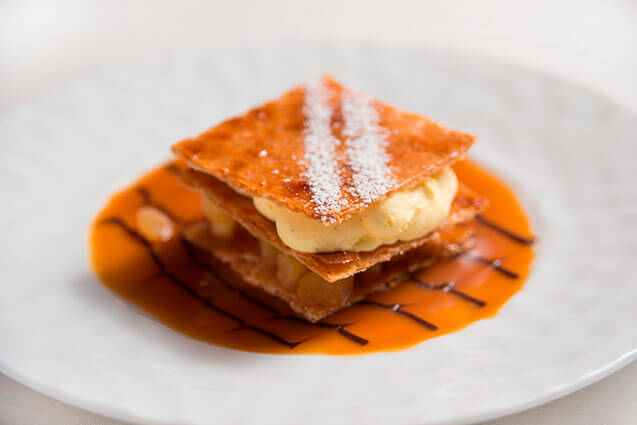 For the dessert, the low salt Liquid Shio-Koji was used in a whipped cream sandwiched between pie dough. Aficionados are great fans of this salty caramel-flavored Italian sweet. Surprised Italian voices arose from the assemblage, "It can even be used for desserts!!" Journalist Gabriele commented, "For a unique fermented food made specifically for the creation of miso and sake in Japan, I find it fascinating that it has practical value in Italian cuisine, and that it's actually delicious." With an end to the dinner rapidly approaching, Enrico elaborated for us the endless possibilities of Hanamaruki Liquid Shio-Koji. 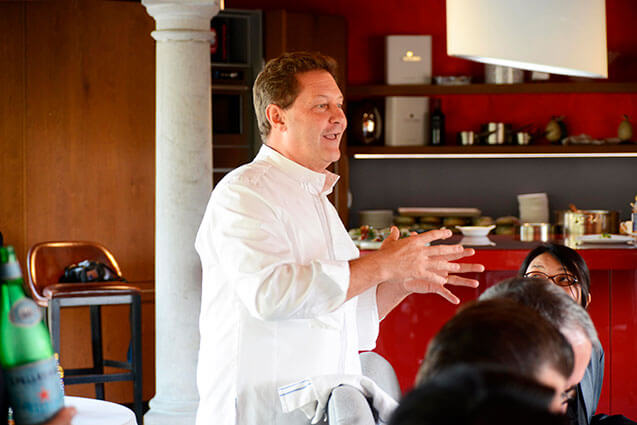 "In the past I frequently experimented with Japanese ingredients and seasonings, but this was my first experience with Liquid Shio-Koji. I was aware of rice koji, which has a paste-like consistency, but this liquid form opened up a whole new range of possibilities for my cooking. It’s also extremely convenient that it exists in standard and low salt form. Liquid Shio-Koji possesses true umami (a word which has now entered the Italian vernacular) and when used in marinades has the effect of tenderizing proteins like meat and fish. In the case of working with fish in particular its usefulness to a chef can’t be overstated because of its ability to accelerate aging. It marries well with desserts as an addition to fresh cream, as the bitter, salty elements contrast in intriguing ways with the sweet. My quest to discover the proper amount to use and the golden ratio of sweet to salty continues.” 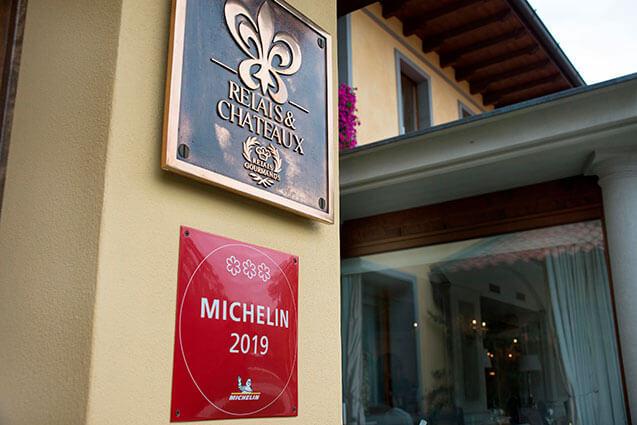 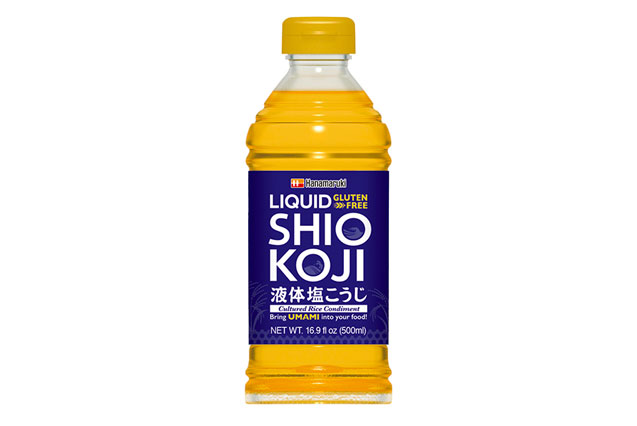