The White Horse for Philosophers and for Athletes

A 1-hour-drive from Nagano Station will take you to Hakuba village, located in the North-West of Nagano prefecture. Having ten various ski areas, it can be called a mecca for skiers in Japan. What makes Hakuba famous worldwide is its abundance of powdery snow, its steep lines and magnificent views created by 3,000-meter summits called the Northern Japan Alps.

Hakuba is known as one of the most beautiful places in Japan with its magnificent mountainous view. Its fame started soon after the Westernization of Japan in the 19th century when academic researchers climbed the mountains and found their beautiful landscapes and abundant alpine plants there. In 2017, it was selected among the “34 most beautiful places in Japan” by CNN, an American news-based television channel.

Anybody can become a Hakuba local if you visit twice. In fact, many people who fell in love with Hakuba’s powdery snow and its beautiful landscape, regardless of nationality, have relocated in and spent their happy lives among the locals. “Hakuba is a Neverland,” said a Hakuba local who is from other part of Japan. Neverland is an imaginary island, needless to say, where Peter Pan and Tinker Bell live. People who come to Neverland cease to age. In Hakuba people can become kids again if they love nature, no matter where they are from, no matter how old they are. It takes about three hours to go to Hakuba from Tokyo.
Accidentally, three hours is the time taken when a fairy flies to Neverland from London. 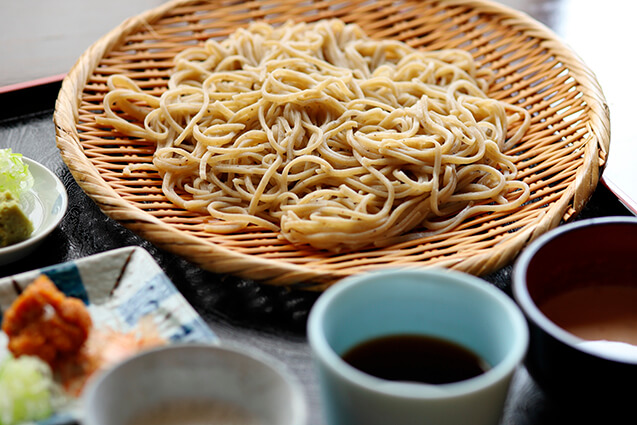 Soba (buckwheat noodles) is the specialty of the Shinshu area. It would be a good idea to start your trip in Hakuba by eating soba. Ringoya serves homemade soba with three different kinds of soup; squeeze of local pungent radish with miso, a soup made from local walnut and a soup made from soy sauce with dashi of bonito. 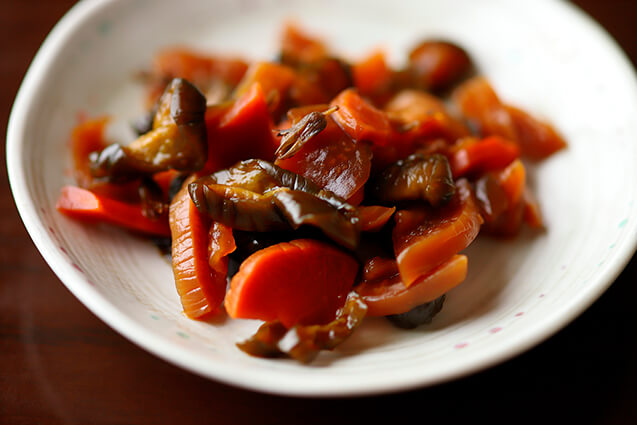 Mixed soy-sauce based pickles of cucumber, radish, eggplants, myoga (Japanese ginger) and the fruit of shiso (a plant of the mint family) called Otari-zuke, a specialty of Otari Village next to Hakuba Village. The locals of Otari Village preserve seasonal vegetables by salting. They remove salt from the vegetables, chop them finely and marinate them in the soy-sauce based sauce. 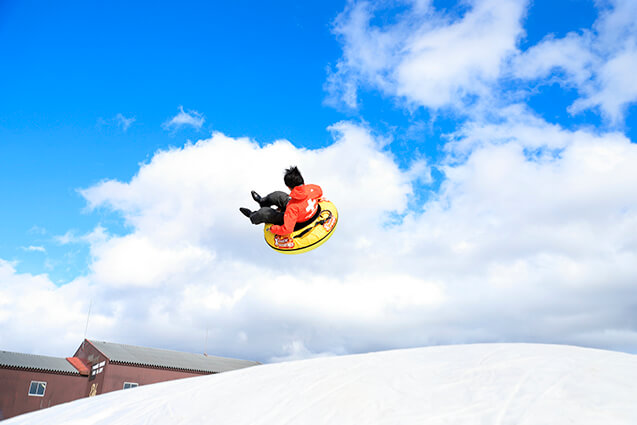 Tsugaike is well known for its greenery thanks to Tsugaike Shizen-en (Tsugaike Nature Park) which was developed in 1970. The park has a 5.5 kilometer-long hiking course at an altitude of 1,800 to 2,000 meters. On the highland marsh, created by humification of peat moss for thousands of years, various natural beauties show in all seasons. White skunk cabbage blooms when the piled snow starts to melt. Flowers of alpine plants provide freshness in summer. Leaves in autumn colors leave us speechless.

Each of these seasonal mountain sceneries can be classified as “very Japanese”, but a brand new kind of adventure park imported from France was introduced in the site in August 2018. It is called “Hakuba Tsugaike WOW!!”. As its name suggests, it is the adventure park that makes people scream “Wow!” There are nine exciting activities such as “Amidas” where you crawl in huge nets, (cf: “Ami” is the Japanese word for “net”). “Tobidas” where you slide down toward a big air bag riding on a tube, (cf: “Tobi” is for “flying”). “Kogidas” where you go on a rope at 10 meters height by aero cycle, (cf: “Kogi” is for “pedaling”). All of them are not only for kids but also adults who want to be kids again! 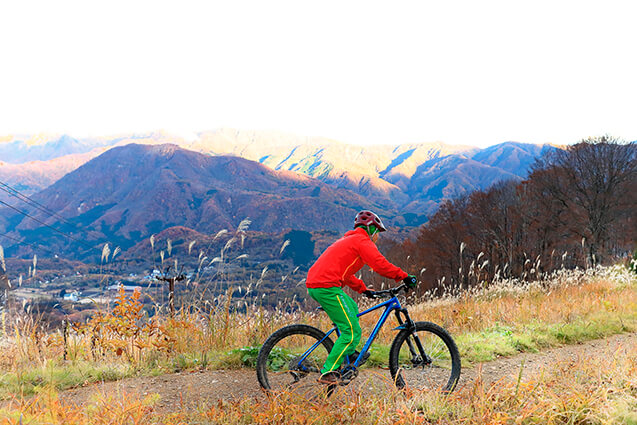 Going up to the summit of Mount Iwatake (1,289 meters high) by the Iwatake Gondola Lift “Noah” you can visit Hakuba Mountain Harbor for a magnificent mountain view with an aromatic cup of coffee. This is a pleasure for philosophers, but also for athletes - to be precise, for mountain bikers.

Now it is attracting a great deal of attention from mountain bikers all over the world with its thrilling advanced-level downhill courses, quite easy downhill courses for beginners and cross-country courses through the bush. In the cross-country courses there are view points where bike racks and benches are equipped, which allows you to take a break from time to time in order to enjoy the beautiful sceneries of Hakuba mountains. 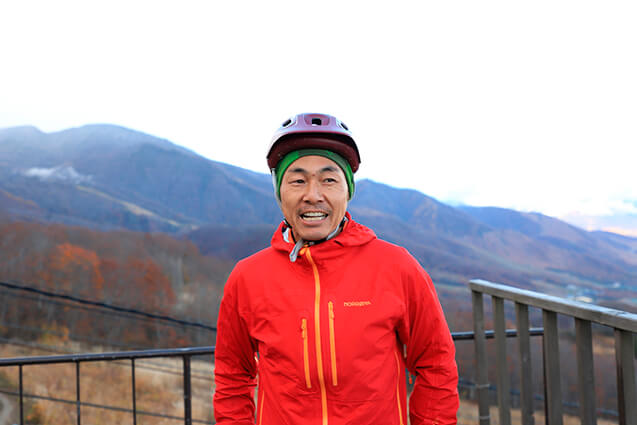 Mr. Isamu Hori, a mountain bike guide and trail builder
He started to create mountain bike trails with his friends to secure a site where he can ride his mountain bike. He invited a world-class trail builder from Australia and finally he revitalized Iwatake as the holy place for mountain bikers. He was not born in Hakuba, but fell in love with the area and relocated to become a “local” and make it a better place.

Various Ways to Savor the Great View of Hakuba 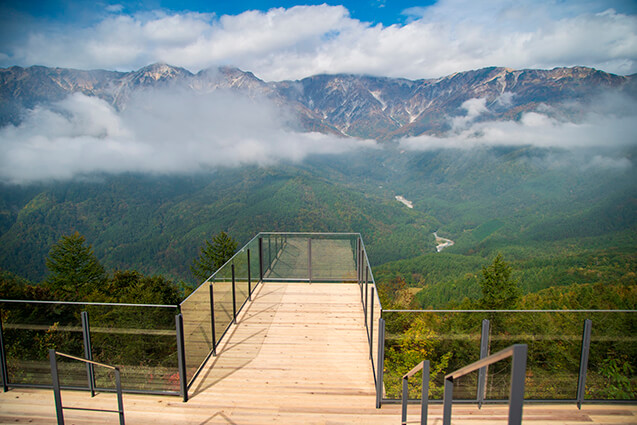 Hakuba Mountain Harbor is a site born in October, 2018 near the end point of Iwatake Gondola Lift “Noah”. As its name refers, it is just like a harbor but in the mountains. It has a pier-like terrace jutting out from the cliff. If you stand on the tip of the “pier” and see the sublime view that Hakuba Sanzan (the three mountains of Hakuba) create, you would feel as if your body dissolve and become part of nature, 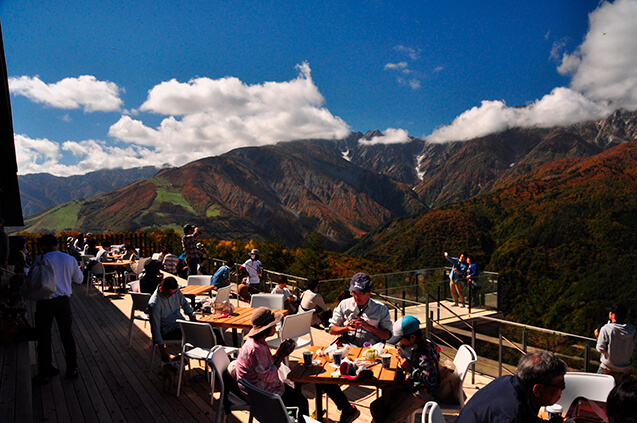 There is a branch shop of “The City Bakery”, a bakery that started at Union Square in New York in 1990. Contrary to its name, a cup of coffee and a Pretzel Croissant also suits the mountain atmosphere. Enjoy your coffee break and reflect on how the mountain air changes your sense of taste and smell. 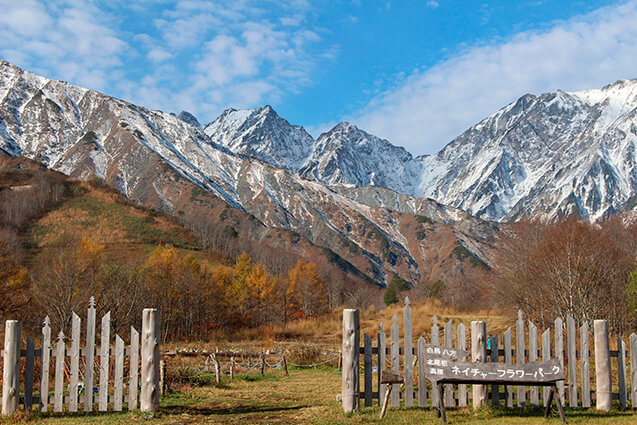 Kitaone Kogen is a recently arranged plateau on the northern side of Happo-One (the Ridge Happo) Kitaone Kogen is located at an altitude of 1,200. It can be reached, however, without ascending the steep slopes of the mountains thanks for the Sakka Kitaone Quad Lift, which is a great feature for philosophers who prefer to take in the view from the air rather than walk. 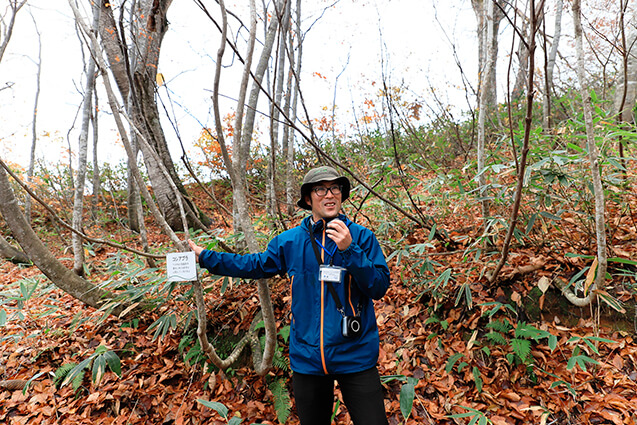 Mr. Kazuhiro Takase welcomes you to Kitaone Kogen. He is one of the concierge on site who knows all the ways to appreciate Kitaone.

Clear your mind and concentrate on the magnificent view of the Northern Japan Alps. Enjoy the cool and crisp air of mountains bathing your feet in an ashiyu foot bath. Walk in the Nature Flower Park observing more than 200 kinds of wild grasses and flowers. Explore the hiking trail with a guide of a concierge.

A new and novel way to appreciate the surroundings is glamping. Glamping is Glamorous Camping, a luxurious way of camping without the inconvenience and the discomfort of normal camping. Staying in a very protective tent, just like a room, you can savor the obsidian night with sparkling stars. You can also watch the brilliant show of the sky when dawn breaks. With a beautiful view for your eyes, delicious food for your tongue, sheer silence for your ears, the scent of the trees and soil for your nose and peacefulness for your mind. Glamping at Kitaone will give you supreme bliss for your five senses that you can never experience in cities. 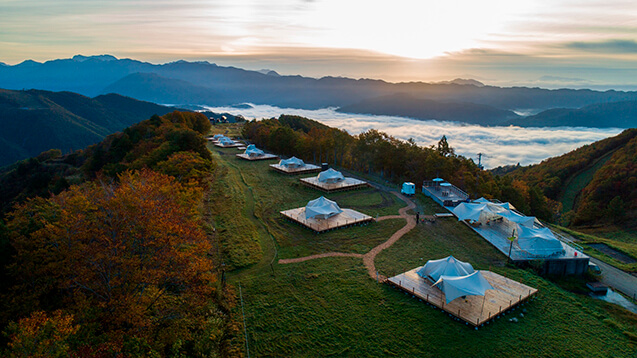 A luxurious and comfortable tents of Snow Peak Company will make you forget that you are in the mountains.

Lake Aoki, a Lake for Deep Thinking and Activities 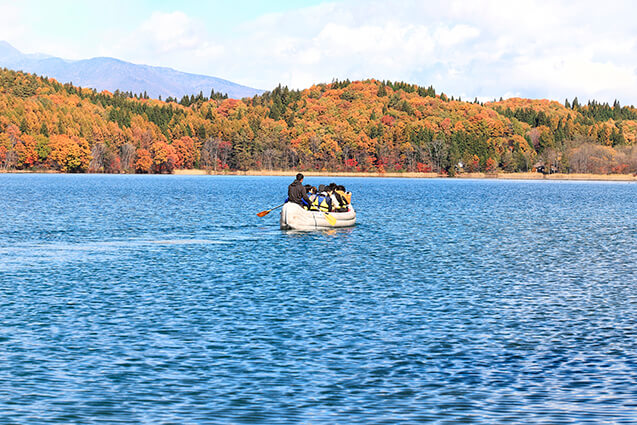 The Lake Aoki, whose transparency is one of the highest in Nagano prefecture, is located about 10 kilometers to the South of Hakuba Station. The road beside the lake called Chikuni Kaido goes toward Itoigawa, a town at the coast of the Sea of Japan. This road is said to have been used for the transportation of salt. During the 16th century when various samurais fought to expand their ruling areas, it is said that the prominent samurai, Uesugi Kenshin, whose territory was at the coast of the Sea of Japan sent salt through this road to his opponent, Takeda Shingen. Takeda ruled the central part of Japan amongst the mountains and was struggling with another leading samurai, Imagawa Ujimasa, who ruled the area at the coast of the Pacific Ocean and stopped the supply of salt to him.

The Lake Aoki seems like a single lake but it is one of the three-lake ranges, Lake Kisaki, Lake Nakazuna and Lake Aoki, located on “Fossa Magna” which is a massive fault line which splits Japan between the North American and Eurasian continental plates. Lake Aoki is the northernmost one of these three and its circumference is 6,650 meters. It is a deep lake (the deepest part being 58 meters) but the water is so transparent that it is called the mirror of the Northern Japan Alps. One of the greatest Japanese film directors of the 20th century, Kon Ichikawa, who was searching for a serene and mysterious lake for his film, chose Lake Aoki. In fact, it has been also called as the lake of a deep thought. On its surface, which is clear enough to reflect your mind, you will see the reflection of a picturesque view that mountains of Hakuba create. It will be a moment of silence for philosophers to puzzle over the questions of life.

The Lake Aoki is not only a contemplative space, but also a place for sports. Various kinds of activities are offered in and near the lake for those who want to be active like children or with children. Not to mention water activities such as kayaking, Canadian canoeing, air canoeing and cruising on a 10-seater big canoe. Other activities over the lake such as hot-air balloon riding and paragliding are also listed on the menu. Rafting in a nearby river and mountain biking around the lake are also offered. 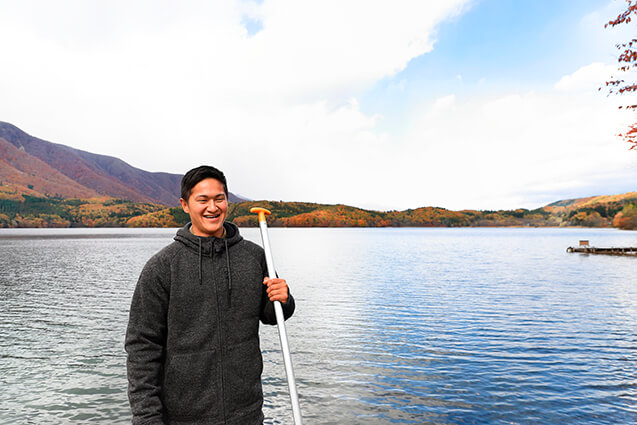 
An Inn that Offers Hot Springs, Local Cuisine and More

“Did you know that Hakuba was the birthplace of minshuku, a Japanese-style guesthouse?” asked Mr. Toshiro Maruyama, the owner of Shirouma-so. “The origin of minshuku was from local farmers and local alpine guides who gave skiers a night’s lodging in their own houses,” he continued. Today there are 500 to 600 accommodations in Hakuba Village and most of them are family-run minshuku and pensions. The advantage of minshuku would be the close relationship between guests and hosts. The greeting for the second-time guests is “Welcome back!”, which proves that Hakuba is the place where people can become locals if they visit twice. 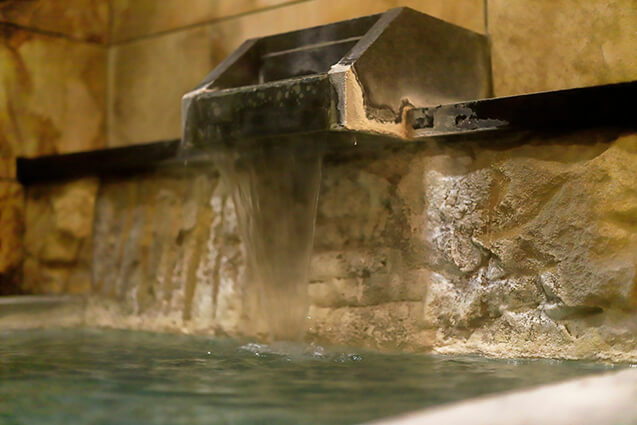 There are hot springs in Hakuba. It is not widely known as the facilities for hot springs were developed just about thirty years ago. The springs are called “Hakuba Happo Onsen (Hakuba Happo Springs)” and the water is highly alkaline, which makes your skin very smooth. Eat homemade dishes of local cuisine, bathe in hot springs, sleep well in a comfortable futon bed to get ready for tomorrows activities. This is Shirouma-so’s way to spend a night in Neverland! 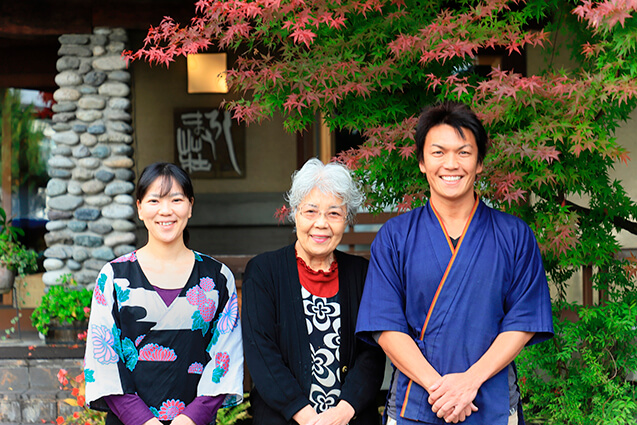 Mr. Toshiro Maruyama, the owner of Shirouma-so (right), Mrs. Misuzu Maruyama, his mother who is in charge of cooking (center), Ms. Satsuki Maruyama, his sister (left)

Shirouma-so received the Global Winner in World Luxury Hotel Award 2012 and Mr. Maruyama was selected among the best three in Worldwide Hospitality Awards 2018 in Paris. 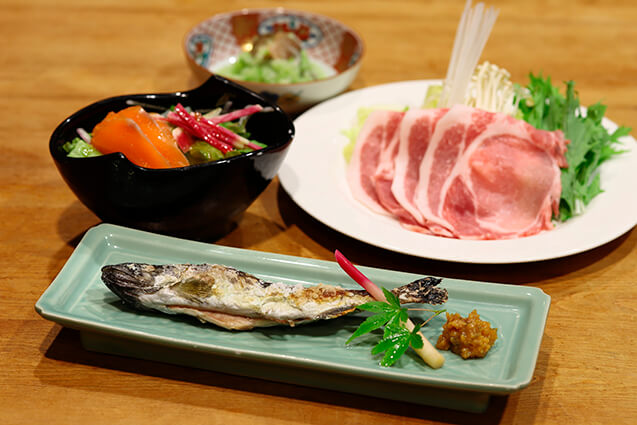 A landlocked masu salmon simply grilled with salt, sashimi of Shinshu salmon cultivated in a nearby river, green vitamin radish, miso seasoned by green pepper, shabushabu of local Hakuba pork… Mrs. Misuzu, locally born and grown, cooks dishes of local cuisine with locally grown ingredients. Most of the vegetables are grown in the house farm. 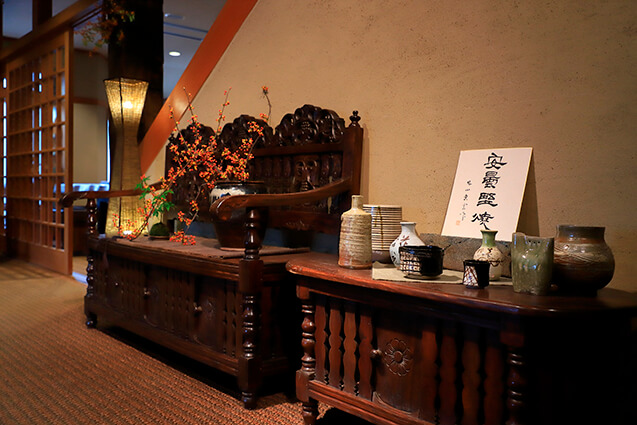 This inn was based on a farm house which was constructed more than 300 years ago. It was renovated into Japanese modern style house but the old pillar and the beam still remained.

vol.9 Hakuba Area in Nagano Prefecture
The White Horse for Philosophers and for Athletes


This project is supported by the Kanto Bureau of Economy, Trade and Industry.