BIRDY.―The story of the development of a glass towel vol.1

BIRDY. by Erik Lorincz cocktail shakersThe concave-convex surface of the interior created by intensive polishing produces delicate bubbles, opens up the aroma of the cocktail and extends the mellow mouth-feel until the last moment of imbibing. In addition, it becomes possible to mix cocktails more smoothly by putting convex-concave, which was conventionally cut horizontally, in a vertical direction. Moreover, because of the streamlined rather than linear form, it has also received a favorable reception from female bartenders with small hands due to its easier ability to grip. As a result, the cocktail shaker has been selected as one of "The Wonder 500," a collection of superior local products about which Japan can boast.

"I no longer need to wipe twice.", "I used to replace several sheets a day, but a single one is now enough.", "It absorbs water droplets instantly, and this water absorption lasts", "The sparkle of the glass after a wiping is completely different.", "The wiping comfort is surprisingly smooth and gentle on the palm of my hand "……
Bartenders and sommeliers who use the glass towel "BIRDY." appreciate its performance and ease of use with admiration. Some say that it's an unprecedented tool that makes the bartenders' work much easier.

Manufacturing that originates and evolves from the field

"BIRDY." is a factory brand developed by Yokoyama Kogyo Co., Ltd., which predominantly manufactures industrial products such as auto parts and building materials in Toyota City, Aichi Prefecture, utilizing the technique of metallic processing.
The brand’s flagship product, the cocktail shaker, was first launched in 2013, and is characterized by its unique rounded form and convex-concave surface at the level of 0.0001 mm = 0.1 micron that is applied by craftsmen vertically after polishing the interior a piece at a time. The ease of use that sets it apart from conventional shakers, as well as the fullness of the taste it imparts has earned its respect from not only top Japanese bartenders, but those overseas as well. 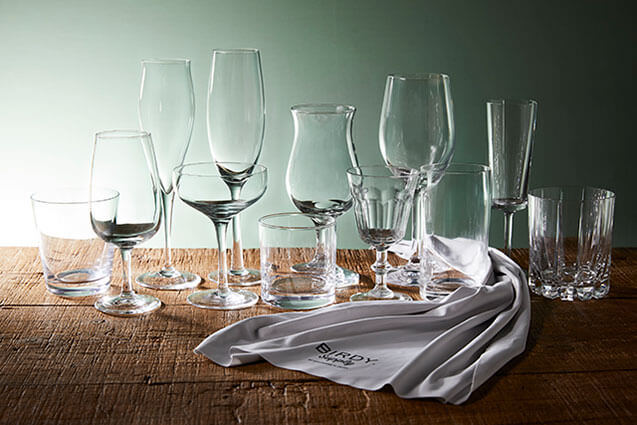 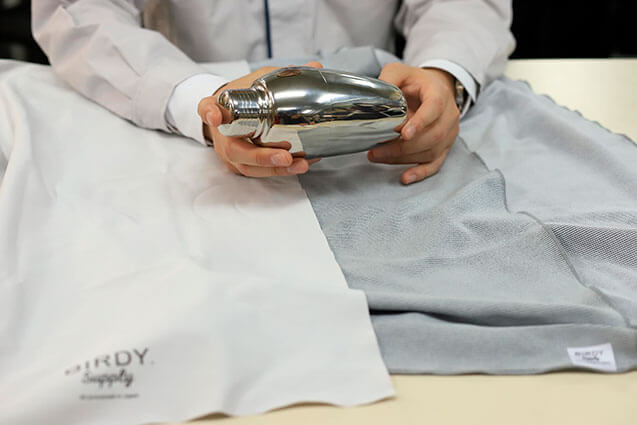 BIRDY. by Erik Lorincz cocktail shakers
The concave-convex surface of the interior created by intensive polishing produces delicate bubbles, opens up the aroma of the cocktail and extends the mellow mouth-feel until the last moment of imbibing. In addition, it becomes possible to mix cocktails more smoothly by putting convex-concave, which was conventionally cut horizontally, in a vertical direction. Moreover, because of the streamlined rather than linear form, it has also received a favorable reception from female bartenders with small hands due to its easier ability to grip. As a result, the cocktail shaker has been selected as one of "The Wonder 500," a collection of superior local products about which Japan can boast. 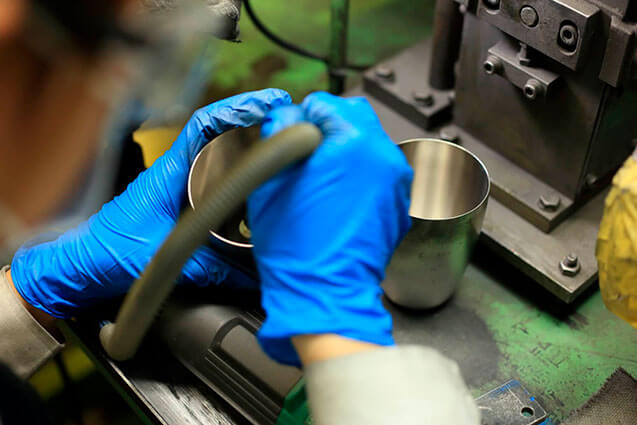 Apply the best-suited polish according to its intended use, such as cocktail shaker, tumbler and decanter. In the final stage, the polishing accuracy is improved by using industrial diamond paste, which is not normally used for stainless steel processing. The micro convex-concave produced by the hands of craftsmen one by one brings out the maximum flavor of the ingredients, such as alcohol and juice.

Despite entering from the automotive industry, a completely different sector, their growth has been remarkable. One reason lies in the thorough hands-on policy. 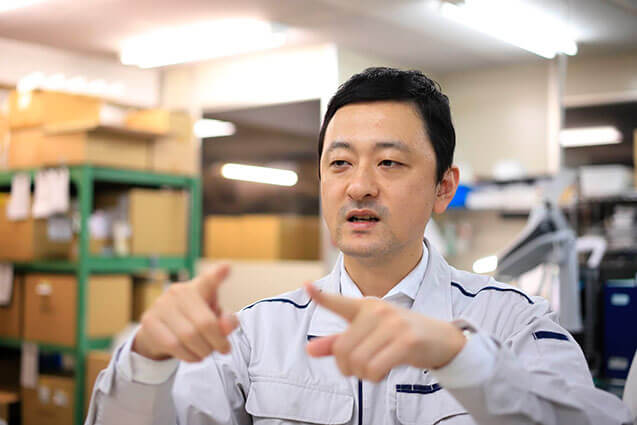 "We cannot make shakers without venturing into the trenches where they are actually used on a daily basis," says Tetsuya Yokoyama, the brand manager of BIRDY.
What do bartenders want from a shaker? What is their source of dissatisfaction with the shaker? How do bartenders feel when manipulating the shaker? And finally, what is happening in the shaker?
"I went to bars many times as a customer, returning with an abundance of valuable opinions and ideas from bartenders with passionate views and considered thoughts."

Since 2014, the BIRDY. team have partnered with Erik Lorincz, a charismatic UK-based bartender, to pursue the performance and comfort-of-use of a shaker at more advanced levels. They asked Lorincz to take the prototype out for a spin for a couple of weeks and share his impressions. The team is now trying to release the product through the final trial even after the product has been fully completed.
The manufacturing of BIRDY. always starts from the field and journeys forth with valuable input from the field.


For developing the glass towel, once again observations from the field yielded new opportunity.
One day, Yokoyama sat at the counter and watched the bartender's movements as usual. He noticed that it took the bartender significant time to wipe down glassware and shakers. Yokoyama himself felt stress when wiping down items for demos at department stores and the like. In addition, some people worried that they would damage their finely-crafted BIRDY. cocktail shaker by polishing it with a normal towel.
"If we use a better towel, we will be able to wipe items quickly, comfortably and without fear of scratching." The seeds of ideas picked up in the field finally sprouted in Yokoyama. 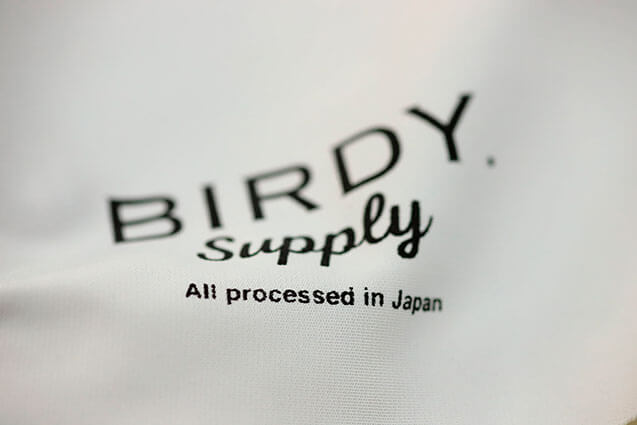 As the production base moves overseas, all parts of the BIRDY. series are manufactured at domestic factories, adhering to the belief that Japan's manufacturing ability is still going strong. As a matter of fact, there is no regulation for classifying a product as "Made in Japan". Completing the final steps of processing domestically allows "Made in Japan" to be placed on the product, but instead products of BIRDY. are marked "Processed entirely in Japan" in order to express the philosophy that all aspects of the product are produced with care and dedication.

Perhaps the bartenders themselves had misconceptions about glass towels. For instance, they did not think the time spent wiping glasses was excessive, and they believed it’s natural that the water absorption of towel deteriorated after wiping with it many times, that fluff was attached to the glass after wiping, that wiping twice was required and that drying completely was difficult. They used their glass towels without noticing there was much room for improvement. If the brand is well-known, then it is all the more true.

However, Yokoyama says, "Even products that you believe have been perfected may still continue to evolve."
This is exactly what the cocktail shaker is. The conventional concept of the function was reset to zero, and the structure was re-examined from the starting point. By implementing "analog high technology" that achieves convex-concave at a level of 0.1 micron, which is in an area that can only be produced by the human hand, the company opened up the possibilities of the cocktail shaker.
"We also had the intuition that we could improve on the towel design as well."

For Yokoyama Kogyo, which has mainly been focused on sales for metal processing, the development of towels is an unknown area. However, the know-how to complement technologies they do not possess with those of other companies was cultivated during the manufacture of automotive parts. Above all, the strongest compass, voices from the field, points them toward their elusive goal. "Even if the materials change, we still want to achieve breakthrough-level quality and broaden the scope of manufacturing. And there is also a desire to further grow as a brand that fulfills the desires of people in the field."

Thoroughly explore what a glass towel should be. 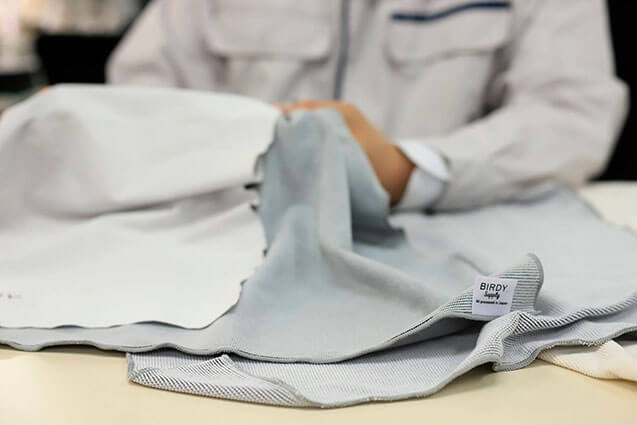 Microfiber is excellent at water absorption, but at 100% usage rate, there is a feeling that it sticks to the glass too much. By slightly adding and mixing the amount of polyester used, slippage was reduced while maintaining water absorption, and it became easier on the hands and a smoother wipe.

The development of a glass towel that originated in this manner was promoted in cooperation with the textile wholesaler. The performance required for kitchen towels, which had been developed in advance, is the overwhelming water absorption capacity, a water retention capacity that does not lose absorption even when wet, quick drying, and softness that does not damage the object or the skin. For glass towels, in addition to the items above, good slip and stretch factors are also desired. In order to cover all bases, many iterations of a prototype were made by making adjustments to the weave and yarn. 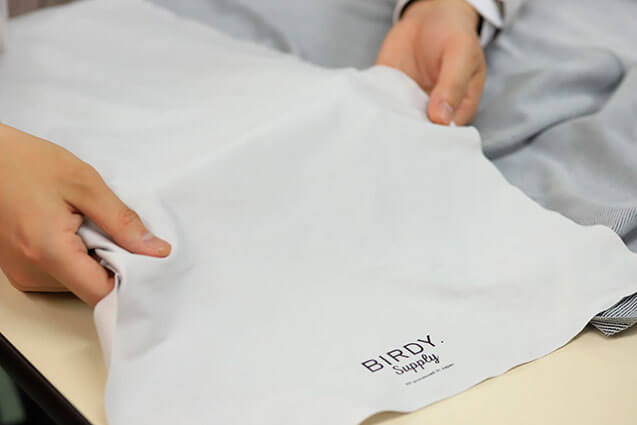 To fulfill the ideal sought after by sommeliers and bartenders, it took almost two years to go through the entire process, from yarn selection to weaving. The stern eyes that identify even the difference between weaving machines have led to high praise from the field.

Yokoyama says, "Even if they are made in the same factory, with the same yarn, and with the same weave, the texture will change slightly when a different weaving machine is used." "The ideal glass towel" was pursued with hawk-like eyes attuned to the micro world.

The glass towel was completed as the result of a two-year effort, achieving an exceptional level of slipperiness by mixing a dash of polyester into the highest quality microfiber with exceptional water absorption. By eliminating edge stitching, it also fits in the narrow groove of the glass, dries quickly and leads to a sophisticated and beautiful design. The comfort of use is the same incredible level referred to earlier. The BIRDY. glass towel quietly keeps supporting the work of the bartenders who stand on site today.

Widely used in both restaurants and home kitchens

The convenience of the BIRDY. glass towel does not end at the bar counter. It shows their potential not only for the average bar glass but also for a wide variety of glassware used in restaurants and domestic kitchens.

“I would like to choose a glass towel that is comfortable to wipe with, as the glassware will be used a great deal in the coming season,” says cooking expert Michiko Matsuda.

"Because the size of the BIRDY. glass towel is sufficiently large, it can completely absorb water while changing the place. The tactile feel is smooth and slippery, and you can wipe things in comfort." 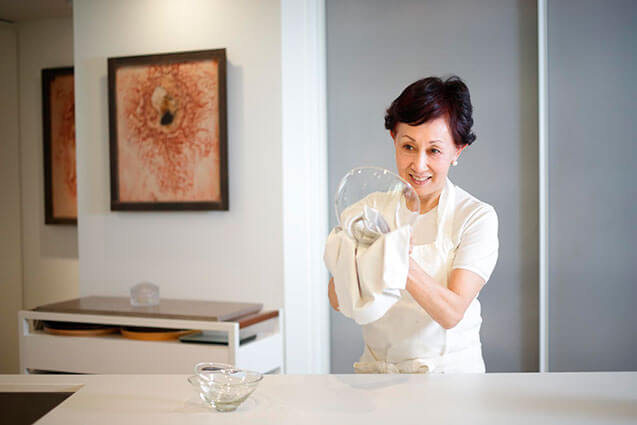 She wipes glassware with a sleek design with rippling edges, using a BIRDY. glass towel. The essential goal to be achieved with glassware is the cloudless glow. 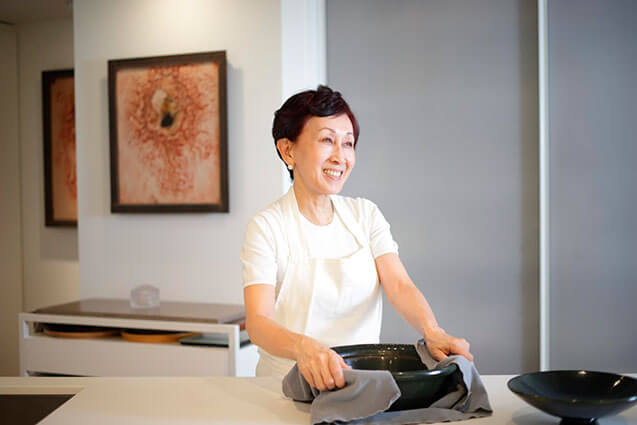 With a BIRDY. kitchen towel, the earthenware pot "Kominabe” or “flavorful pan" which Michiko Matsuda developed herself can be wiped to a beautiful sheen, as can be seen here. 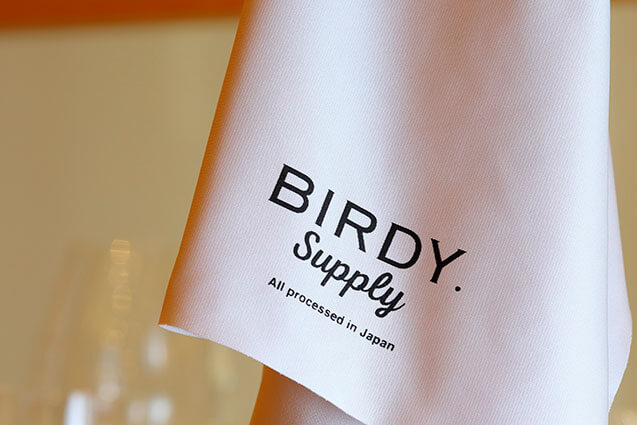