Artisanal Crafts Handed from the Past in the Hiraizumi Area.The Spirit of Artisans, Unbeaten by the Changes of the Time. 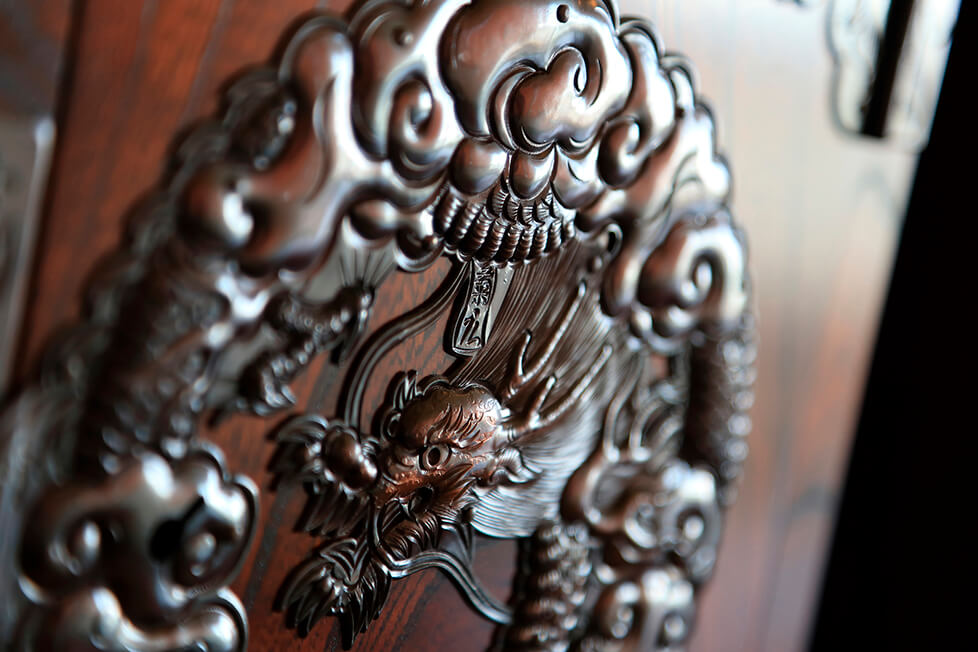 Like Chuson-ji, which was unbeaten by the fall of the Oshu Fujiwara clan and serial fires, the art and the crafts promoted by the Oshu Fujiwara clan over 800 years ago have remained unbeaten by the ravages of the time. Carrying the seeds of tradition through time is a challenging task. The higher the quality of the seeds, the more care is needed from their caretakers, who are bound to the task by fate. The key to success is not just the love the caretakers have for their charges, but the sense of respect they have for the responsibility of passing on the traditions to future generations. Some studios where traditional art and traditional crafts are pursued in the Hiraizumi area open to the public and visitors can see this care in action.

Hidehira-nuri Lacquerware
Another Awakened Beauty of the Oriental El Dorado 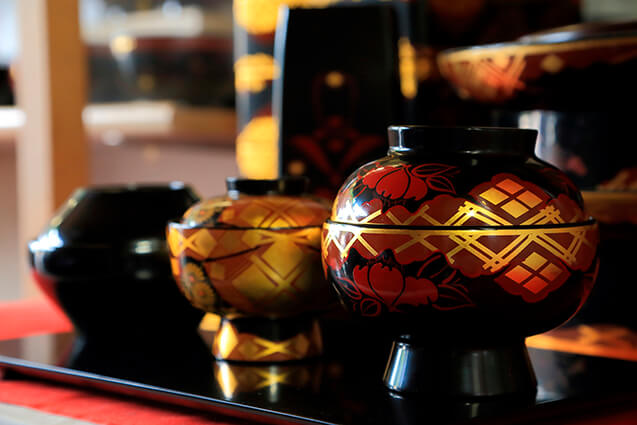 Japan has been a lacquerware-producing country for hundreds of years. More than a half of 47 administrative divisions of Japan have their own lacquerware production. This is because the collection of the sap of sumac trees for lacquer and the production of lacquerware were promoted by many feudal clans during the Edo Period (1603-1868). The Hiraizumi area, of course, was not the exception. Here there is a very special culture of lacquerware production called Hidehira-nuri. Fujiwara Hidehira, the third lord of the Oshu Fujiwara clan, invited artisans and had them create lacquerware using locally produced lacquer and locally mined gold to promote the production of lacquerware in the area. The characteristics of Hidehira-nuri include decorative wave-shaped cloud motifs realized with gold leaves and gold powder; rhombus-shaped motifs realized with gold sheets; and motifs of flowering plants and fruit painted with gold, which were believed to bring luck. The descriptions of the tradition of producing Hidehira-nuri lacquerware, however disappeared from history books written after the beginning of the 19th century. The lacquerware, like Chuson-ji and other cultures promoted by the Oshu Fujiwara clan, lay dormant for a time like the seeds of the lotus flower found in the ancient remains, waiting to be discovered. We introduce two studios of the Hidehira-nuri lacquerware where the artisans take care of the awakened seeds. 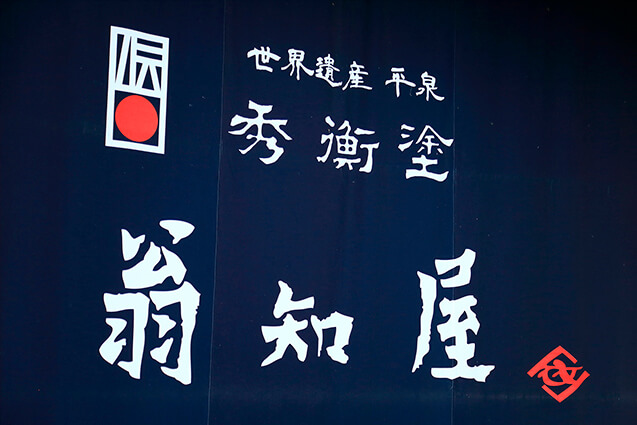 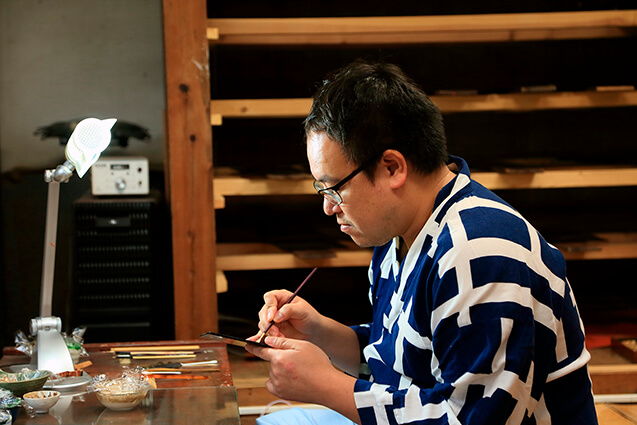 
Ochi-ya has a studio reserved for workshops on its premises called ‘KURAS.’ Anyone, from children to adults, who are interested in lacquerware making can participate in the workshops. Courses for professionals are also available for those who aim to become artisans of lacquerware making, the future caretakers of the seeds of tradition. By visiting Ochi-ya you will discover that Hiraizumi is not just a place where you can observe the aristocratic culture of the past, but it is also a place where you will experience how beauty created with special materials and distinct techniques can enrich your life, allowing you to cross the borders of the time. 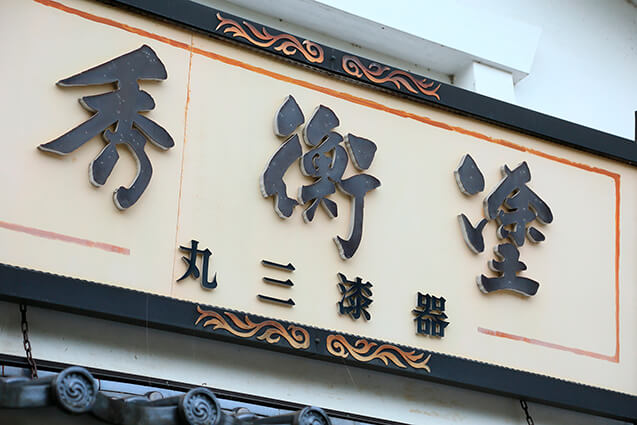 Established in 1904, Marusan Shikki manages everything involving the production and sales of lacquerware. When they first opened, the business specialized in making four-legged trays commonly used for festive food (for the meals of noble families in olden days), and their woodworking technique for base-making is also remarkable. 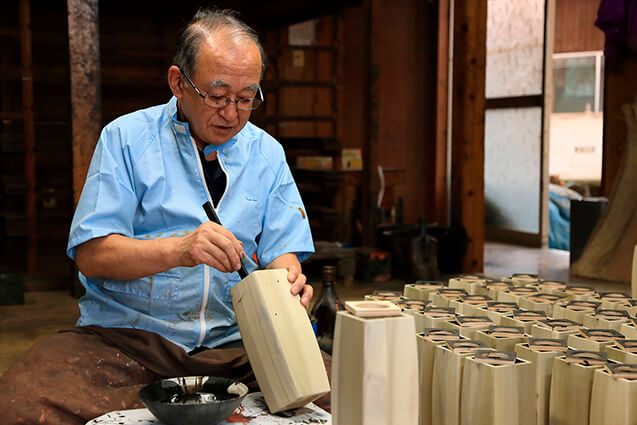 You can witness how artisans put their souls into products by visiting this simple Japanese-style studio. If you take a guide or interpreter with you, you will be able to understand completely each process of lacquerware making. You will realize that an exquisite glossy-black bowl or a gorgeous tray with gold ornaments is truly made from a humble piece of wood! Lacquer is not applied just once, but applied many times. Every application of lacquer is followed by the process of polishing to make the lacquerware highly durable and beautiful from every angle. 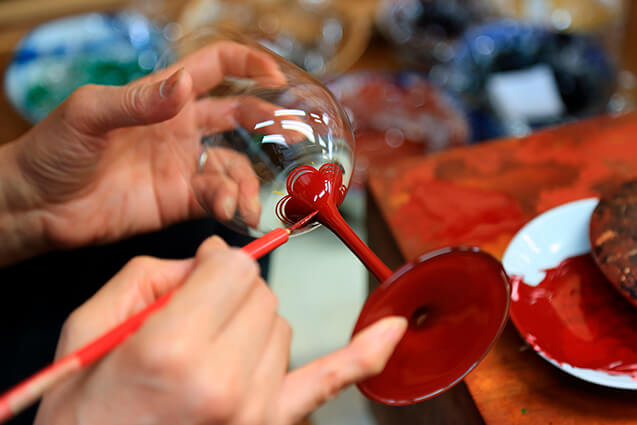 Marusan Shikki produces not only traditional lacquerware but also a new line of products that complement the current Westernized way of life in Japan, such as wine glasses ornamented with lacquer. 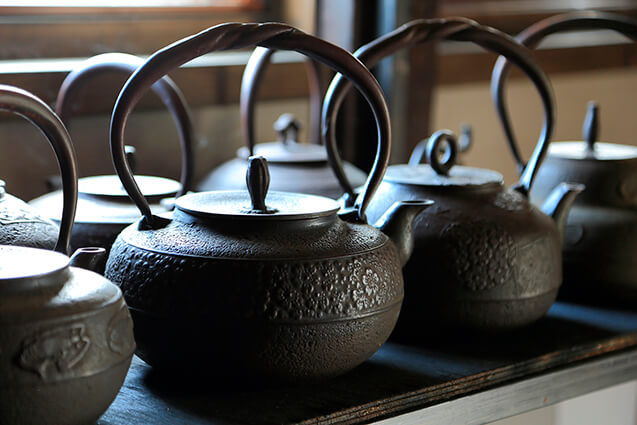 Nambu Tekki ironware is one of the many local traditions that were practiced in Iwate from the 11th century onwards, created during the era of the first lord of the Oshu Fujiwara clan, Fujiwara Kiyohira. The foundry of the Iwate area is said to have been started by the founders of the Western part of Japan invited by Kiyohira. He developed the foundry as part of the local industry, due to the suitability of the area. In particular, it was easy to obtain the materials needed (such as iron sand and charcoal) as well as high-quality sand and clay for mould making. 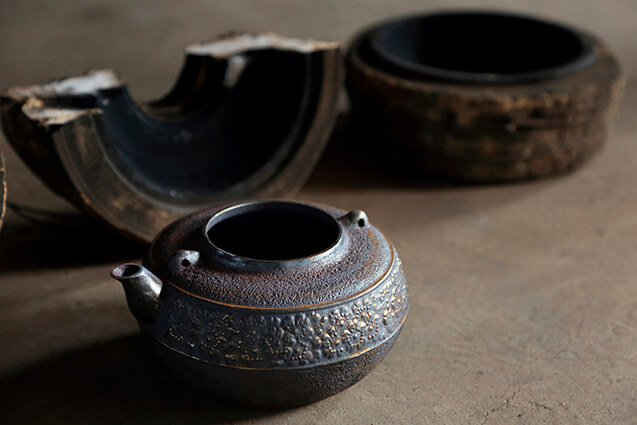 Making a Nambu Tekki iron kettle begins with design-making. An artisan creates a wooden model based on his design and then makes a mould with clay. He presses a stick-like tool against the mould to create patterns one by one on the surface of the iron kettle. Then, inside of the mould, he puts a wooden model to create the inner side of the kettle. Melted iron is poured between the wooden model and the mould. After this extensive process, he blackens the iron kettle in a charcoal furnace and lacquers with a brush-like tool made from rice plants. 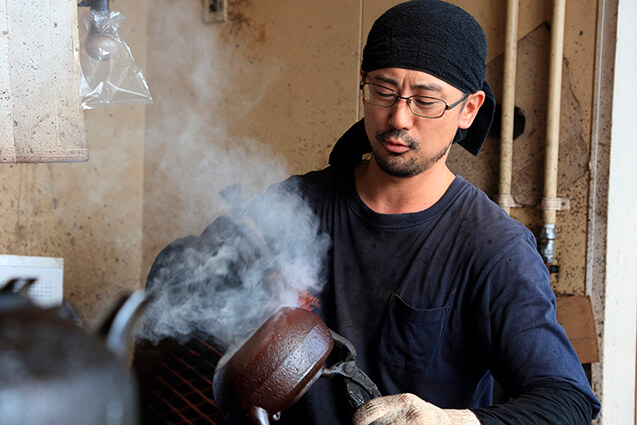 
The beauty of Nambu Tekki ironware is in its simplicity. It possesses the qualities of wabi-sabi, a traditional Japanese philosophy of beauty that values the uniqueness in every object and its imperfections. Nambu Tekki ironware becomes even more beautiful over time through its natural patina and aging, showing traces of its time with you in your life. This lovely ironware will make you realize again the importance of using objects with care for a long time as treasures, which we tend to forget in this material world! 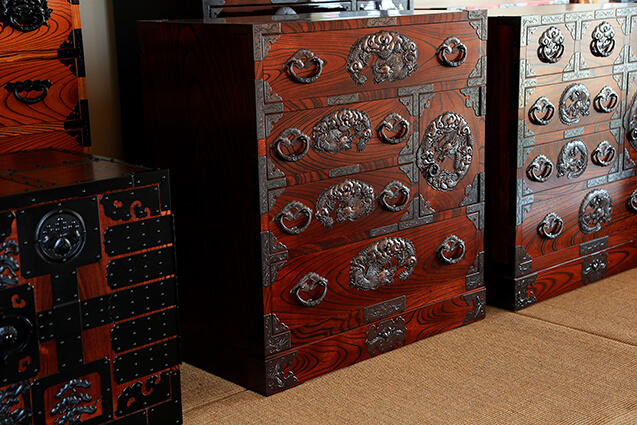 While the Iwayado “tansu” Chest may remind you of an oak chest from the German Baroque or British Georgian period, it is not a piece of antique furniture. It is traditional furniture that is still manufactured in Iwate Prefecture, whose history dates back to the era of the Oshu Fujiwara clan. Furniture-making was encouraged by Fujiwara Kiyohira, the first lord, as part of his passion for artisan crafts and the development of local industry. At the time, the main pieces of furniture resembled “trunks”, created in the same style as chests of the Baroque period. Later, at the end of the 18th century, the lord of Iwayado Castle encouraged furniture- making and let his people study various styles of trunks, as well as how best to stain, paint and lacquer them. As a result, they invented chests with wheels and developed their own unique model of chest – the Iwayado Chest – which is still present today. 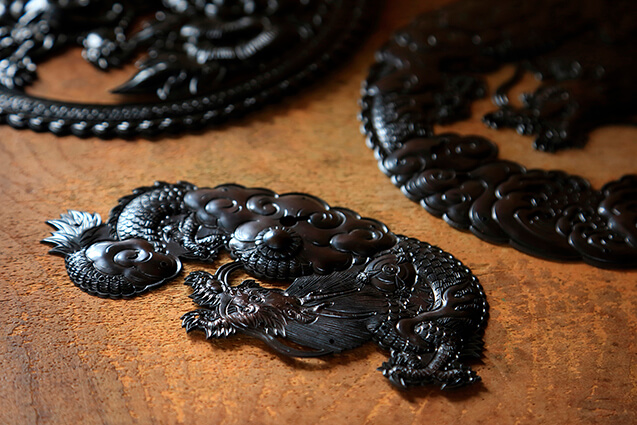 The engraved metal ornament for Iwayado chest is a masterpiece in and of itself, created with more than 150 kinds of gravers. 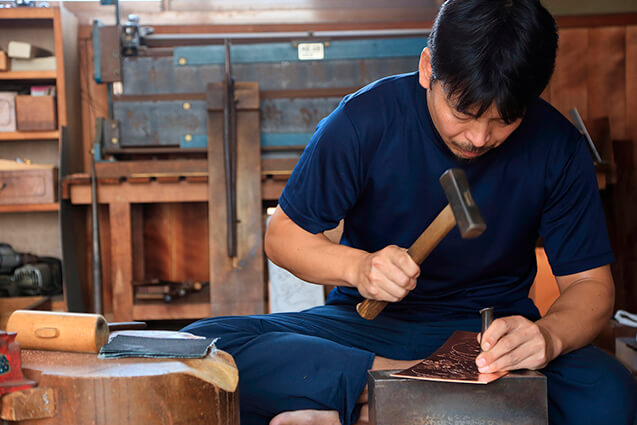 Peonies, paulownia leaves, arabesques, dragons and lions are the standard patterns of the ornaments, but you can order your original ornaments for your chest. Iwayado chests can be defined as a masterful elaboration of the traditional techniques encouraged by the Oshu Fujiwara clan in the area, by combining the traditional crafts of lacquer, ironware and furniture. Thus every part of a chest is reminiscent of the lotus flower grown from a 2000-year-old seed.


“New” Traditions After the 19th Century

Now that we have explored the beautiful sense of traditions born in Ichinoseki, we ought to spend some time appreciating several “new” traditions. These new seeds, although over 100 yeas old, have never laid dormant. It should be the duty of the people living in the present day to keep them active from now on! 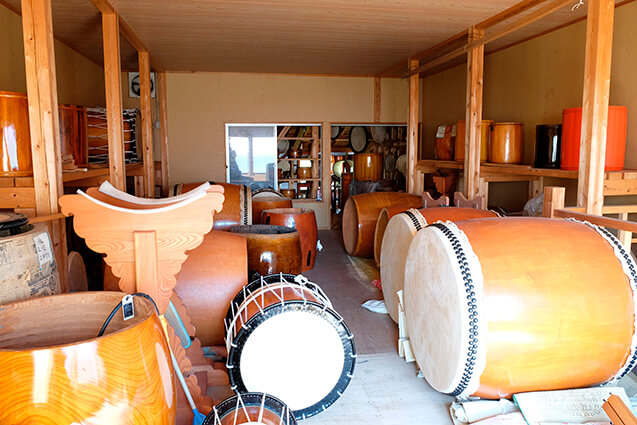 The storeroom of Koyama Taiko-ten is an overwhelming sight as it is full of many types and sizes of drums!


The story of the founder of Oyama Taiko Shop is incomparable. Like Byron said, the truth is sometimes stranger and more fantastic than fiction. The founder learned how to make wooden buckets in Manchuria, where he spent his time in the Volunteer Pioneer Youth Army at the age of fifteen. Later, he was taken to Siberia as a detainee after World War II and he was forced to work in a leather tanning factory. There he learned the technique of leather tanning and developed a vast knowledge of the practice. After he came back to Japan, he began to make drums using the techniques of wooden bucket-making and leather tanning that he had learned during his travels. Why drums? Because he thought, “Music and festivals will go on even after men die.”

Drum-making starts with mountain climbing - to select the perfect wood. Each wood has its own characteristics, which the Oyama “taiko” Drum Shop optimizes when creating their drums. His treatment of leather as a diverse material is much the same. He says every drum has its own sound and that no two drums sound alike when made by the hand of artisans. 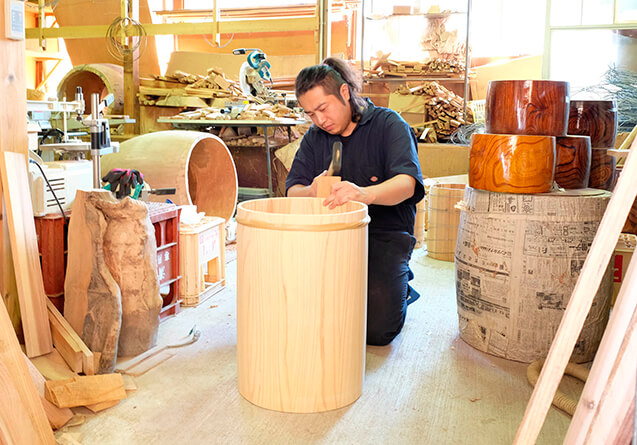 The spirit of drum making has been passed on to the grandson of the founder, Mr. Kenji Oyama. 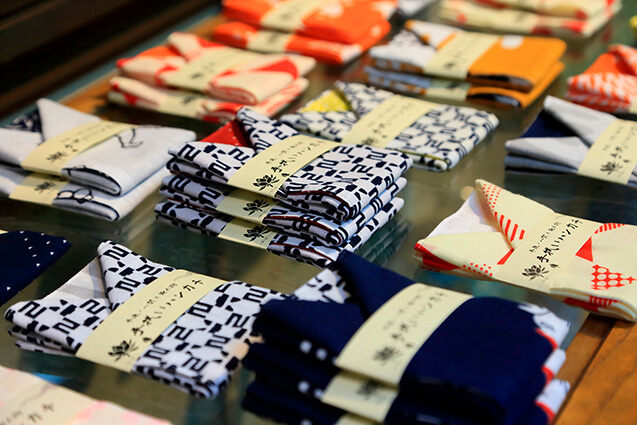 While the Kyoya Dyeing Shop was established in 1919, their studio is in a very modern building. It offers a variety of services involving designing, dyeing and sewing for cloth of any size, from small hankies to curtains. 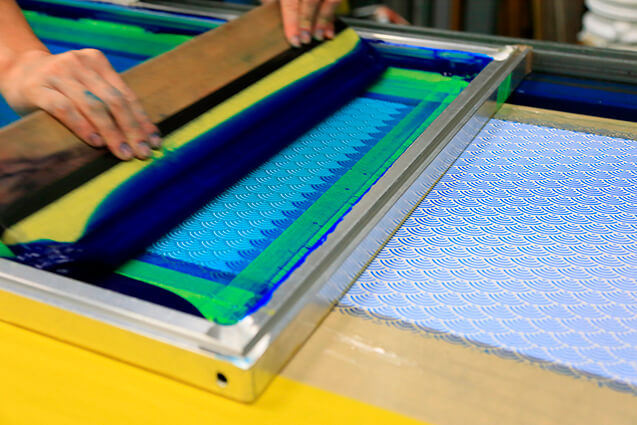 Kyoya’s provision of individualized service for over one hundred years is a testimony to the skill and ability of its staff. “Impossible” is a word not to be found in the dictionary of Kyoya. Dip dyeing, brush dyeing and hand printing are the main dyeing techniques, and of course, they are all available at the Kyoya Dyeing Shop. Moreover, staff members never stop studying new materials and dyeing methods to handle any new materials which are and will be invented one after another, says Mr. Yusuke Hachiya, the fourth president of the Kyoya Dyeing Shop. Here, easy indigo-dyeing workshops are available, as well as factory tours. 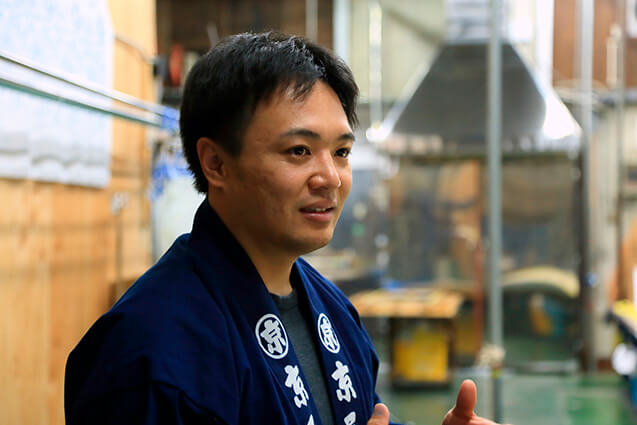 
Vol.6 The Hiraizumi and Ichinoseki Area in Iwate Prefecture
Like Lotus Flowers Grown from 2,000-year-old Seeds
Artisanal Crafts Handed from the Past in the Hiraizumi Area.The Spirit of Artisans, Unbeaten by the Changes of the Time.