Making a difference beyond the kitchen:

Top chefs are leading movements for social change and sustainability 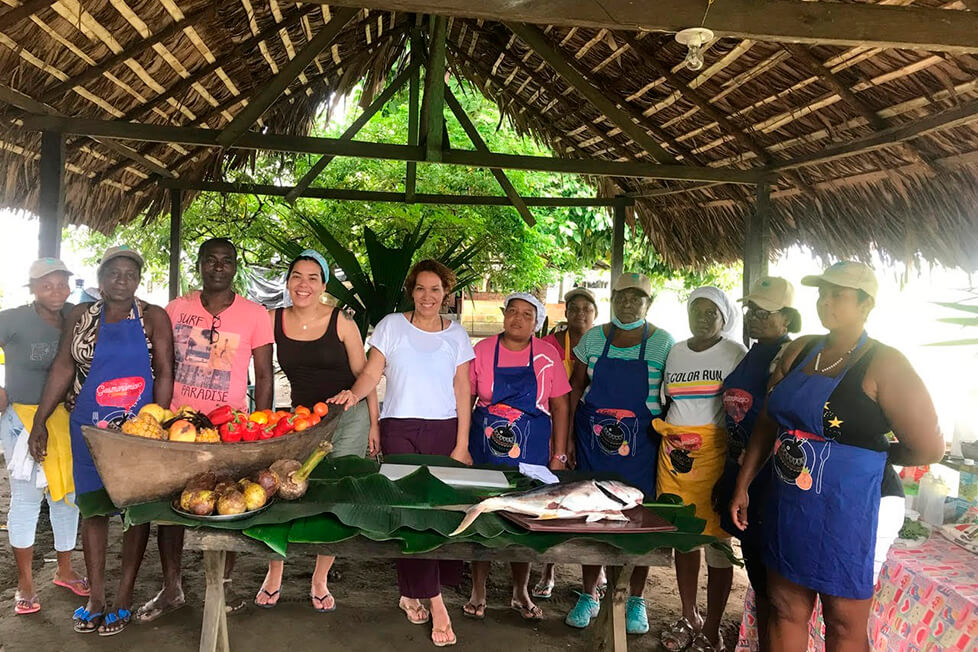 Sustainability has become a buzzword in the food world, as an increasing number of chefs have started projects to effect social and environmental change. “Among our profession, there’s been a shift from concentrating on the artistic side of our work to caring about the earth and issues of health and welfare,” says Shinobu Namae of L’effervescence, winner of the 2018 Asia’s 50 Best Restaurants Sustainable Restaurant award. Sustainability means more than recycling and using organic produce: it’s a wide-ranging and multifaceted concept, requiring different approaches in different parts of the world. Here are some perspectives from global leaders in the restaurant industry.

What a tiny mountain town can teach the world 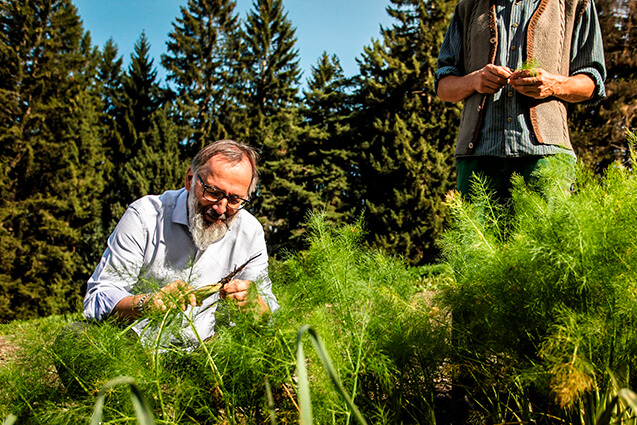 Seven years ago, Norbert Niederkofler made a radical decision. He took imported foods completely off the menu at St. Hubertus, the three-Michelin-starred restaurant nestled in the Dolomites mountains of northeastern Italy. Gone were foie gras and pigeon, replaced by calf tripe, eel, and river trout – ingredients endemic to the South Tyrol region where Niederkofler was born and raised.

At first, the transition wasn’t easy. “People asked, ‘Where’s the foie gras?’ and we had to tell them that we didn’t serve it anymore. A lot of people stopped coming to the restaurant, but new people came who understood what we were doing,” he recalls.

When St. Hubertus opened in 1996, Niederkofler had recently returned from several years abroad, honing his skills in London and Munich before traveling to New York to work for Daniel Bouley. He started making international cuisine, but soon realized that “it doesn’t make sense to bring food from overseas here because you don’t get the real feeling of the place.” Over time, he developed a hyper-local approach to cuisine that he calls, “cook the mountain,” relying on native ingredients such as wild berries and freshwater fish. Instead of olive oil, which his not traditionally found in the Tyrolean kitchen, he uses herb-infused grapeseed oil and substitutes piquant fermented products for lemons: “When you see the mountains, breathe the air, and eat the food that grows here, it’s a 360-degree experience,” he says. 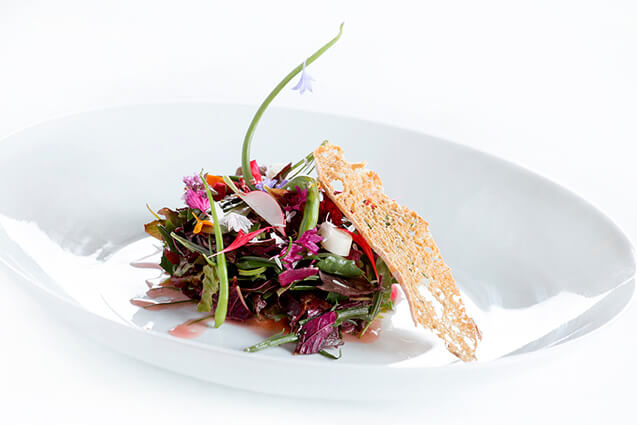 Eight years ago, he gathered a group of chefs to exchange ideas on how to work more sustainably. Seeking to open the discussions to a global audience, he launched Care’s, an annual symposium that explores ethical concerns in the restaurant industry, in 2015. This year’s event, which drew hundreds of guests from around the world, focused on food waste and featured speakers such as Lara Gilmore of Osteria Francescana, Leonor Espinosa of restaurant Leo in Bogota, and Matt Orlando of Copenhagen’s Amass. In an upcoming edition, Niederkofler will tackle the issue of working conditions: “We have to change the crazy way we work in this industry. If we don’t, we won’t have a business anymore,” he says.

Empowerment through food in Latin America 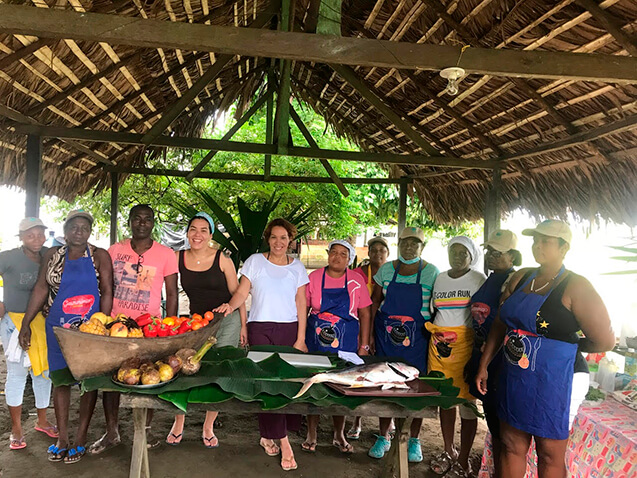 Leonor Espinosa didn’t set out to become an activist. But when her work as a chef took her to rural villages ravaged by years of political conflict and drug trafficking, she realized that food could provide a means of empowerment to impoverished communities. She made it her mission to find ways to boost local agriculture, revive culinary traditions and create new commercial pathways for indigenous products.

“There were families in absolute poverty, and I wanted to take part in improving their lives,” she says, pointing out that, while Colombia is the second most biologically diverse country in the world, “there is no government support in Colombia for an agricultural revolution.”

Espinosa has constructed a network of producers in predominantly indigenous and Afro-Colombian communities that supply her two Bogota eateries with exotic delicacies. Based on the concept of Colombia’s varied ecosystems, the contemporary menu at restaurant Leo includes dishes such as freshwater pirarucu fish with bitter yucca and ojo de pez chilies from the tropical rainforest. 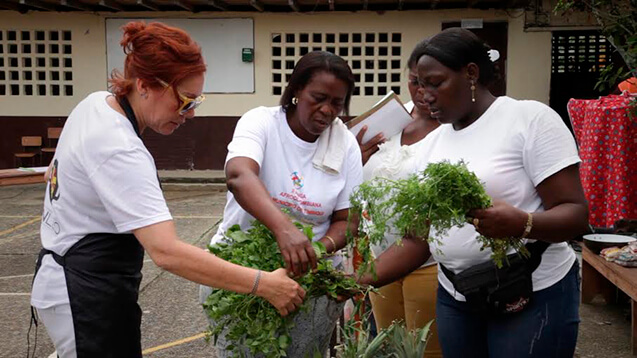 Her efforts, however, extend far beyond the walls of the restaurants. Launched in 2008, her Leonor Espinosa Foundation (FUNLEO) has helped farmers create added-value products and established nationwide sales channels for endemic ingredients, which have increased the average income of purveyors by 30 to 50 percent. Last year, she was the recipient of the Basque Culinary World Prize, which came with an award of 100,000 Euros. Her daughter, Laura Hernandez Espinosa, who manages the foundation, says that a large portion of the money will go toward the construction of a gastronomic center in Coqui, a remote village on the Pacific coast. “The idea is to build a restaurant and a garden where the community can grow their own food. The goal is to help them create their own strategy toward cultural and ecological tourism,” she explains.

The relative lack of social stability in rural areas, says Hernandez Espinosa, has been one of the biggest challenges. “Sometimes we have to stop and wait for the situation to normalize. These regions are very vulnerable, particularly strategic for the drug trade,” she notes.

Nevertheless, Leonor Espinosa is resolute: “I don’t see obstacles. When you are focused, you have strength and cohesion,” she says. 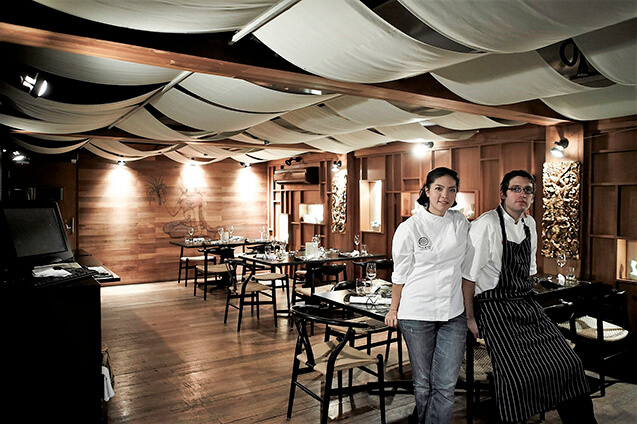 In terms of sustainability efforts, Asian countries have lagged behind their western counterparts, but awareness is rising. In March, Re Food Forum, Southeast Asia’s first major sustainability conference, took place in Bangkok. Organized by chefs Duangporn “Bo” Songvisava and Dylan Jones, of restaurant Bo.lan, the event covered food waste, the relationship between chefs and producers, and native ingredients. More than 30 international speakers from the restaurant industry, government agencies, and the agricultural sector convened to discuss local solutions to problems such as depleted fisheries, a lack of clean drinking water, and soil erosion. “We ruffled some feathers and inspired people to look at things differently,” Jones says. “It was a chance for folks to connect with people they wouldn’t ordinarily speak to.”

Since opening Bo.lan a decade ago, Songvisava and Jones have been at the forefront of the sustainability movement in Thailand, working with growers to encourage organic farming while minimizing their restaurant’s carbon footprint. They started by filtering water to eliminate plastic bottles and are now turning coconut waste into charcoal, which they use to fire the grill. Leftover ash is then upcycled to make alkaline water for an eco-friendly cleaning agent. 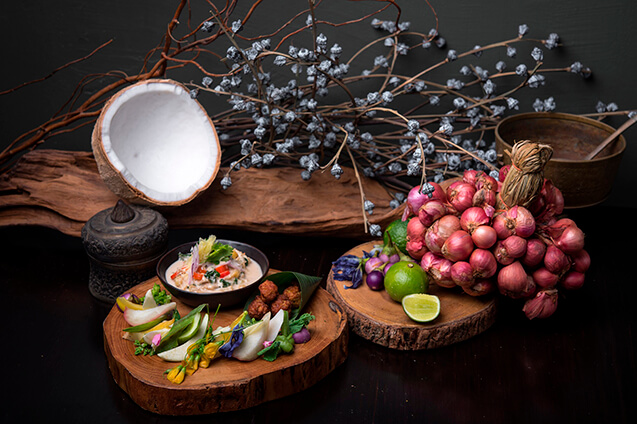 The duo’s latest project is developing a “food forest” in the Isan region of northeastern Thailand. Together with local farmers, they are converting a fallow rice paddy into a permaculture farm with terraced fields and a central pond. They’ve planted cinnamon trees, legumes and indigenous plants such as the hummingbird flower.

The path to self-sufficiency in Britain 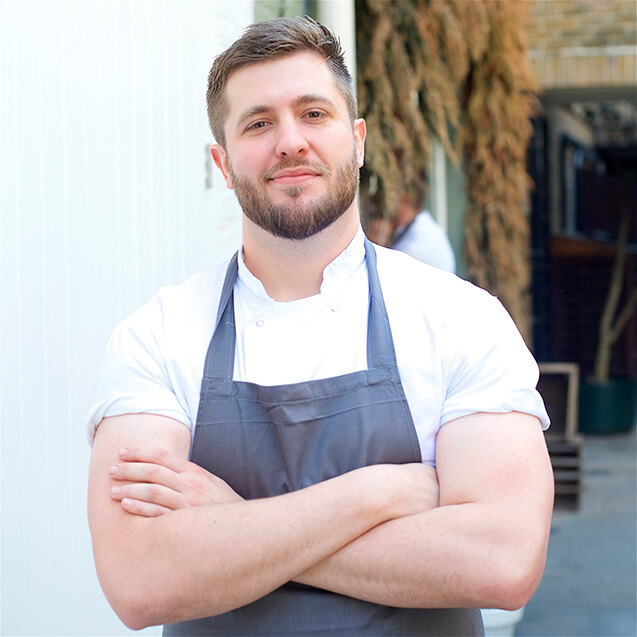 Wild and foraged foods are the cornerstone of Native, a zero-waste restaurant in London where Ivan Tisdall-Downes crafts inventive dishes made with seasonal game like venison, and scraps such as vegetable peels and fish skins. In true nose-to-tail fashion, guests are served different parts of the animal to ensure that every part is used. 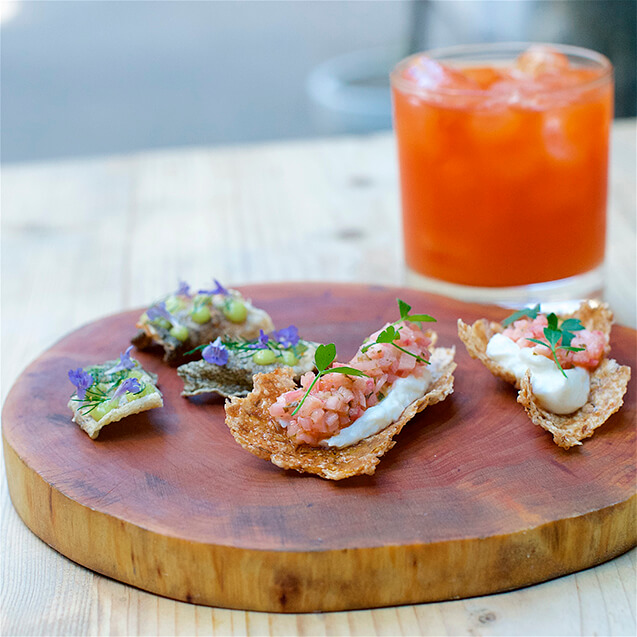 Earlier this month, the restaurant relocated, and Tisdall-Downes plans to install a vertical farm to supplement the produce his team helps to plant at a nearby community garden. “It’s a way of being self-sufficient and controlling what we serve,” he refelcts. “This is going to have to be the future of food.”