The Peninsula That Encapsulates All the Best Features of Japan 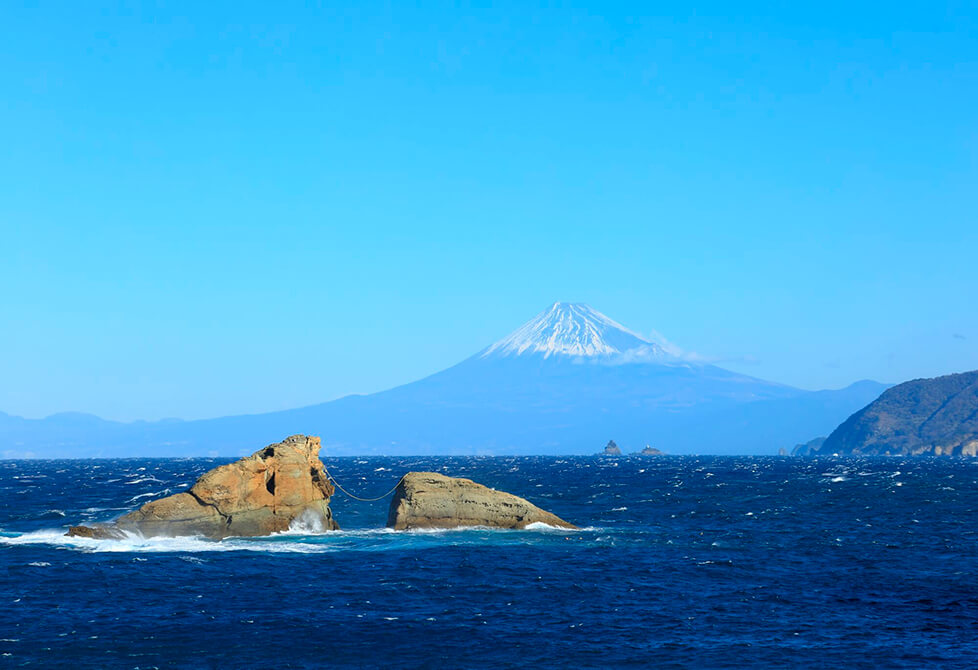 Approximately 20 million years ago, the Izu Peninsula was just a group of submarine volcanoes about 1,500 kilometers away from Japan, towards the south. These volcanoes erupted continuously and became a volcanic island as it piled up with pyroclastic rocks, and the land mass slowly moved towards the north, accompanied by the Philippine Sea Plate. Eventually, it bumped into the mainland of Japan and coalesced with the land. Approximately 600,000 years ago this fuse was completed, which strongly influenced the formation of Mt. Fuji.

The Izu Peninsula is not that big (50 kilometers long from North to South, with a width varying between 15 to 35 kilometers) but it is not a simple peninsula. The surface features of Izu differ from zone to zone because each surface was formed at different times. They are divided roughly into three epochs according to the Izu Peninsula Geopark -- “the epoch of submarine volcanoes”, “the epoch of coalition” and “the epoch of volcanoes above sea.” Each zone has its own characteristics, which makes Izu Peninsula enjoyable to explore.

We invite you to take a trip to the south and west coast of the peninsula, which is full of ruggedly rocky areas, formed mainly in the epoch of submarine volcanoes. A trip to this area by train, however, is not easy. Take the Tokaido Shinkansen (Kodama) to Atami and then change to JR Ito Line, which goes along the east coast to Shimoda (connected to Izu Kyuko Express Line on the way at Ito Station). Further, there is no railway to continue the trip around the peninsula. Without a car it is almost impossible. But the taste of honey becomes sweeter if you obtain it with difficulty. Romantic Japan tends to lie beyond the reach of the railroad network. Your hard work will definitely pay off. Here, you may be able to see magnificent Mt. Fuji and an unforgettable sunset over the ocean.

Light House of the Cape Irozaki, Iro Shrine and Kumano Shrine
Enigmatic Tip of the Peninsula

The cape Irozaki is situated at the Southernmost tip of the Izu Peninsula. The white lighthouse of Cape Irozaki was built two years later after Japan’s first Western-style lighthouse, and was constructed to prevent inbound ships from becoming stranded on the reef after Japan opened its doors to the world. 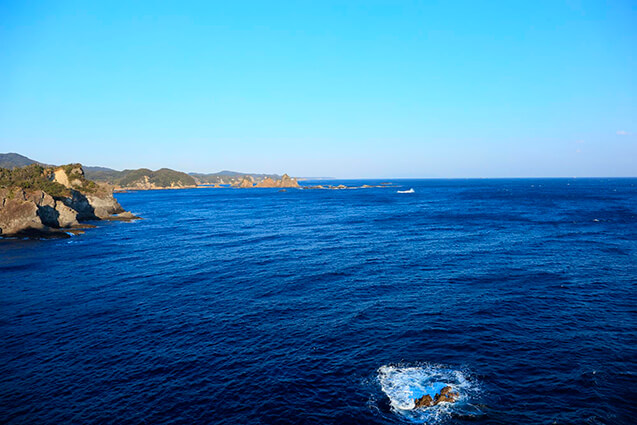 
The Pacific Ocean, seen from the cape, is beautiful and magnificent. It stretches as far as the horizon. Near the horizon you will see afar the seven islands of Izu faintly. This great view gives the impression that you were on an island moving towards south. You may also imagine submarine volcanoes rising above the sea, hundreds of kilometers away, as they had been 20 millions ago. 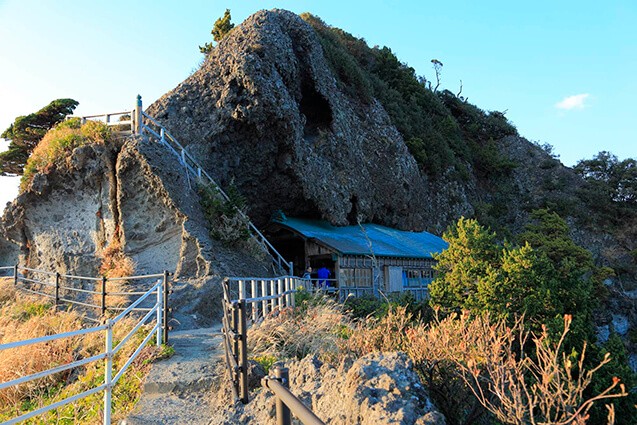 Leaving the light house, continue your way to the shrine. This time you will go down steep steps which were made more than 200 years ago. The shrine is called Iro Shrine. It is believed that it was built more than 1,300 years ago and its beginning is very mythical. The founder of Shugendo (the principle of training to achieve enlightenment) called En no Gyoja or En no Ozunu was banished to Izu Oshima island (one of the seven islands of Izu) in 699 A.C. due to the rumor that he was able to manipulate demonic spirits, making them draw water and gather firewood. The legend continues that he flew to the Cape Irozaki by the magic power of the eleven-faced Kannon. The treasure of this shrine is also interesting. It is a shell of abalone! An architect who was involved in the reconstruction of the shrine slipped and fell into the ocean. Luckily he was able to float to the surface of the water with the chisel in his hand. People found a big abalone stuck to his chisel and on the surface of the shell the image of the eleven-faced Kannon appeared. The shrine itself looks very mythical. These mysterious stories will seem somewhat reasonable if you consider why people built a shrine in such a strange place. In olden times when nobody knew the Earth was spherical, the tip of the cape would have appeared to be the border between the land of the living and the deceased. 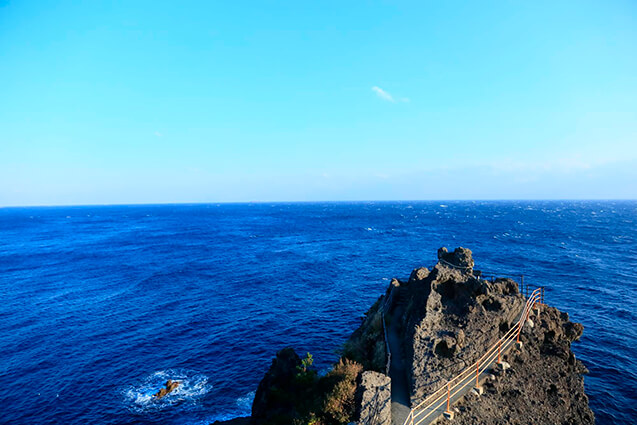 A narrow path continues to the very edge of the cape. You will find a small shrine, even smaller than Iro Shrine, called Kumano Shrine, with many small wooden plaques hung. These plaques are called ema on which people write wishes, especially wishes for a good matchmaking. No-one knows why there lies a shrine for good matchmaking here, on the edge of the cape. Perhaps the biggest wish the ancient Japanese had was not to obtain wealth or good health but to find one’s soulmate! 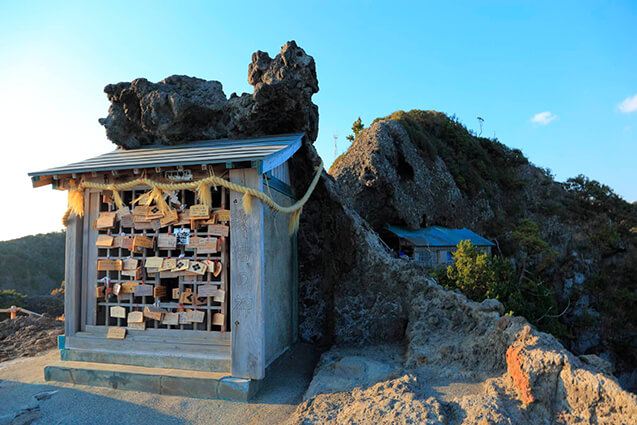 ◎ Irozaki Todai (Light House of the Cape Irozaki)
☎ 0558-23-0118 (Shimoda Coast Guard)
(Entry to the inner side of the light house is only permitted on one day of the year. The date varies, but is usually around the time of the Lighthouse's Anniversary Day, which is celebrated on the November 1st.) 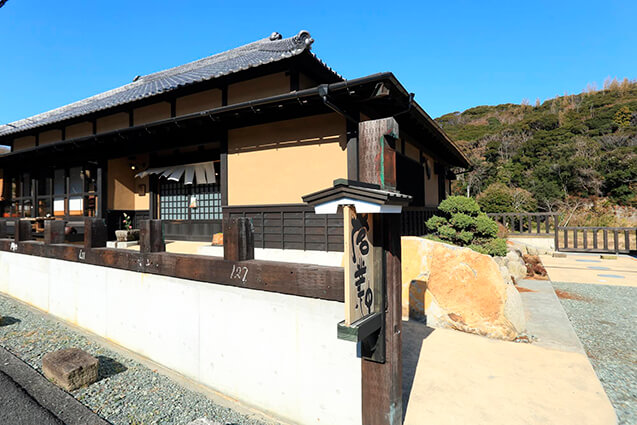 A course of tempura at Tempo-ya is full of locally harvested vegetables, shrimp and locally caught fish is what you may not encounter even in Tokyo. While the food is exquisite, you may also be surprised by the building itself, which has an interesting history. It used to be a house, built about 180 years ago in the Edo period (1603-1868) where a merchant lived. He was very successful in trading rocks, as the Izu Peninsula was famous for quarries (the rock quarried here is called Izu-ishi). This house was once transferred to Shimoda, however later on it was set to be demolished due to the re-planning of streets. However, there was an architect who could not bear to watch it be destroyed and so he saved it. He transferred it back to the area from which it came and renovated its interior. That architect is the father of the chef of Tempo-ya, Mr. Kai Suzuki. 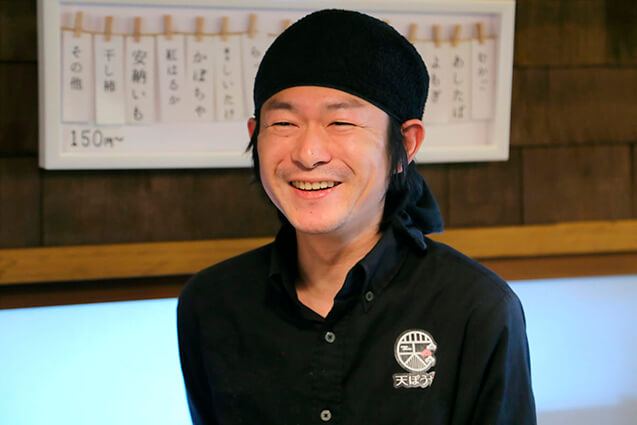 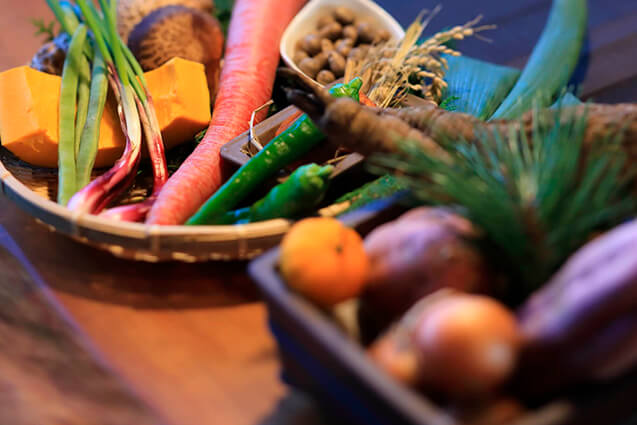 Various kinds of locally harvested vegetables and locally caught fish are served in tempura. As the ingredients are all freshly harvested and caught, even the chef doesn’t know what he will have next week. A lunch in Tempo-ya is a prelude to a trip in the south and west coast of the Izu Peninsula and is a testimony to the fact that Izu Peninsula is a cornucopia of gifts from the Earth. 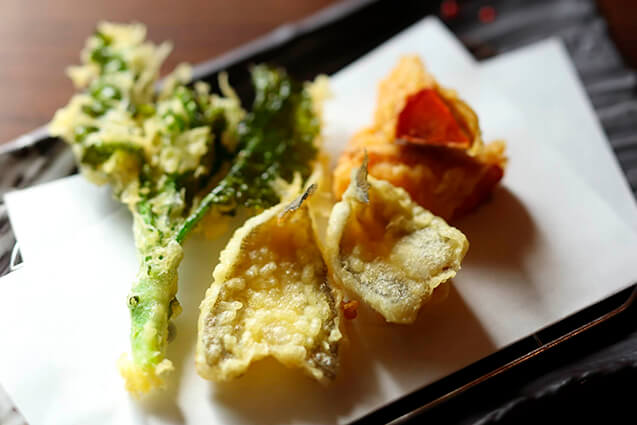 You may know that tempura is not just a cooking method of deep-frying, but also involves steaming which draws out the features of each ingredient and encapsulates them. 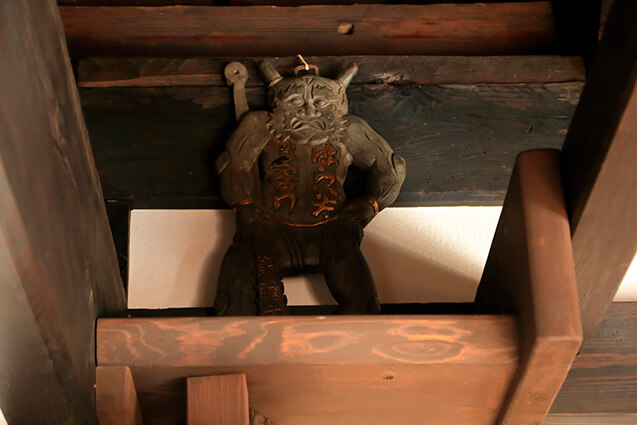 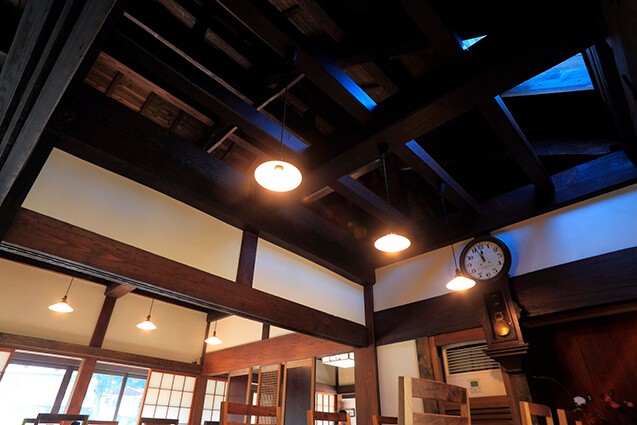 The interior of the house was renovated into a modern Japanese style. The roof lining and the pillars, however, remained as they were. The timbers in the house are 180 years old and are still breathing -- you will see some sap flowing! 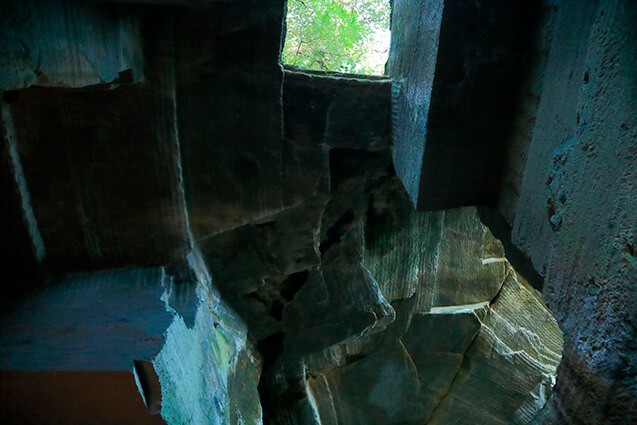 The Izu Penisula is well-known for its quarries and the rocks quarried here are called Izu-ishi. The stone walls of the Imperial Palace in Tokyo, which used to be the Edo Castle, are made of Izu-ishi. Actually there are two types of Izu-ishi; one is hard rocks quarried mainly in the east coast, and the other is soft ones quarried mainly in the south coast. The soft Izu rocks were made from the volcanic ash and pumice formed during “the epoch of submarine volcanoes”. Because of their softness, they are appropriate for processing and have excellent fire resistance (because they are volcanic!). Moreover, these rocks have stripe patterns, which are strata of ash from different eruptions. In this mountain walking tour you can explore the mountain to find the old quarries of Izu rocks. 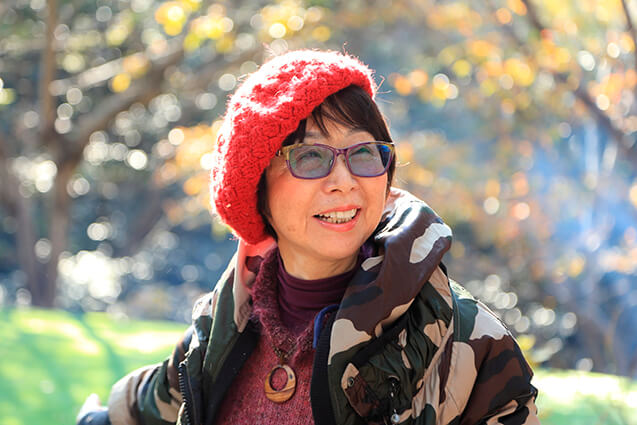 Madam Mieko Takezawa, the owner / tour guide, and the owner of Villa Yumigahama. The legend says quarried rocks were transported by canoes and rafts through the river Aono to Yumigahama beach. Then they were reloaded to larger ships and transported to Edo (Tokyo). This mountain trekking tour is named Kano Legend.

The quarries in this mountain were found by chance. Madam Mieko Takezawa, the owner and the tour guide, is the owner of Villa Yumigahama, holiday cottages on Yumigahama beach on the south coast of Izu Peninsula. She bought the mountain which was about to be purchased by a waste disposal company. One day she went into the mountain with her family and found quarries. With a desire to share these mysterious old quarries with many people, they decided to construct the steps and place ropes necessary for safe walking. It took years to be completed. Untouched wilderness is beautiful with no doubt. But the wilderness touched by warm hands is also beautiful, enjoyable and accessible also for non-professional mountain trekkers. 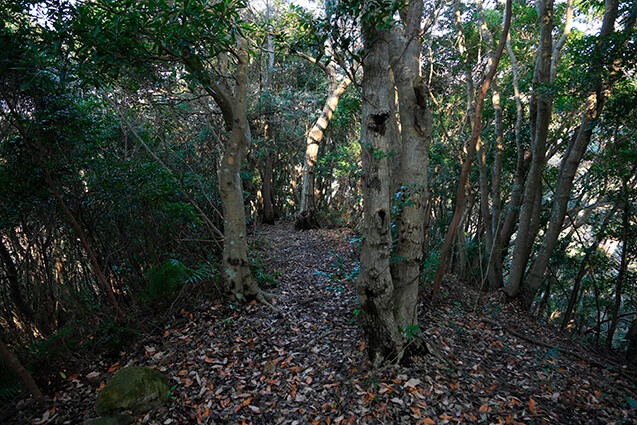 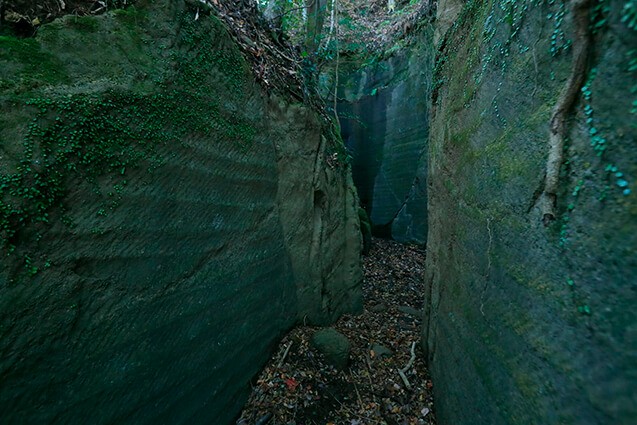 Going up and down through copses led by a path, you will suddenly find a rock wall covered with moist moss, which doesn’t seem to be a natural object. Horizontal, equally spaced marks from chisels on the rock surface will remind you that this is the old quarry. 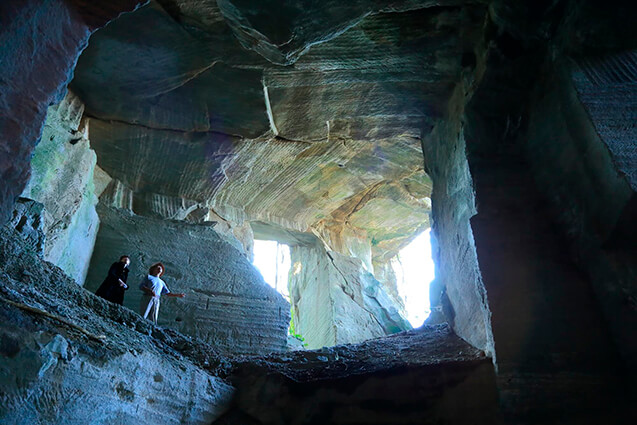 Keep on going along the wall, you will find yourself in the maze of rock that leads you to a rock chamber with a high ceiling. The roof may be more than 10 meters high. The rock chamber will make you feel as if you were Lara Croft from Tomb Raider or Dr. Henry Walton from Indiana Jones!


Vol.8 The Izu Peninsula (South and West Coast) in Shizuoka Prefecture
The Peninsula That Encapsulates All the Best Features of Japan
Unwind Your Mind in 20 Million-Year-Old Water