Unwind Your Mind in 20 Million-Year-Old Water

The Izu Peninsula is an exchequer of hot springs, one of the gifts provided by volcanoes. In its area of 1,430km² there are more than 60 hot springs (not the number of facilities, but the number of ‘springs’!) It is also conspicuous by the varieties of water quality. Normally, the nature of spring varies depending on the region. But for the Izu Peninsula, this is not that case, as the timing of formation of the land differs depending on the ‘area’. Hence, it would be a great idea to go around the peninsula, if you are the lover of natural hot springs, to seek out various types of hot springs. You should leave no corner unsearched! One of the natural hot springs in the southern coast that we would love to recommend you is Shimogamo Onsen (Shimogamo Hot Spring), whose beginning is also charming. It was opened during the era from the 14th to the 16th century called the Muromachi period. Someone found a wounded black kite bathing itself in a pond and he noticed that the water had a healing effect! If you have been to Kyoto, its name may sound familiar to you. Shimogamo is a town in Kyoto where there is an important shrine called Shimogamo Shrine. It is said that court nobles who transferred to this area escaping from Kyoto named this hot spring after their hometown. Taking some historical facts into consideration, it may be easy to imagine that some court nobles who were regarded with hostility traveled a long distance until they found a good place to live in this area at the edge of the peninsula. 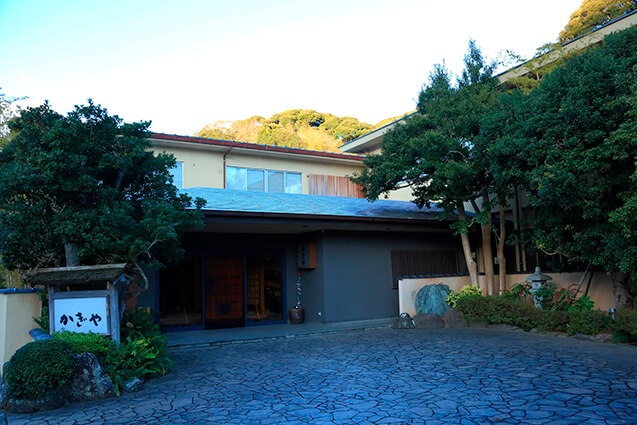 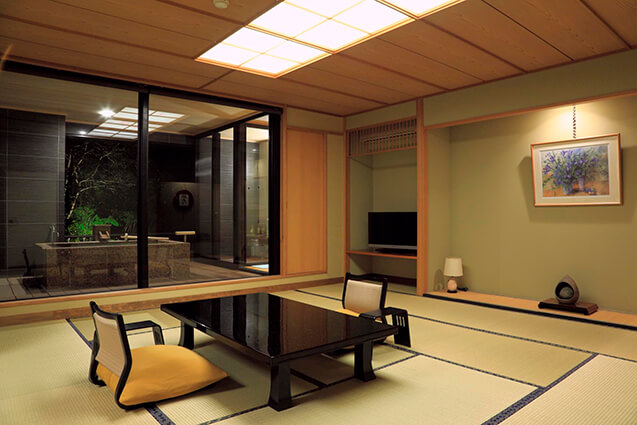 Kagiya is a luxurious and Japanese ryokan styled hotel which was reopened after renovation in July 2017. Here you can savor Japanese beauty and a relaxing moment in a fusion of modern and traditional Japanese circumstances. 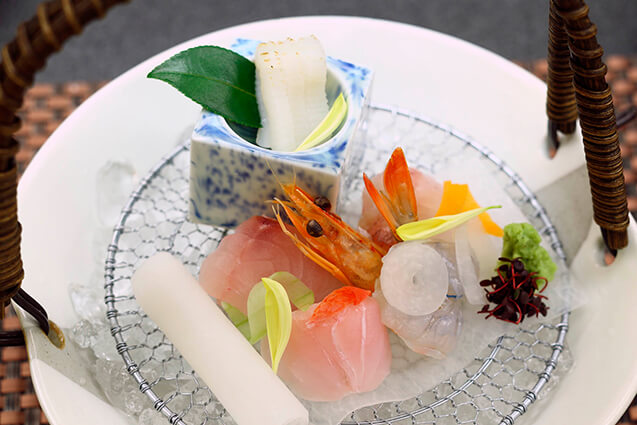 The dinner course is another charm of Kagiya, full of freshly caught fish. 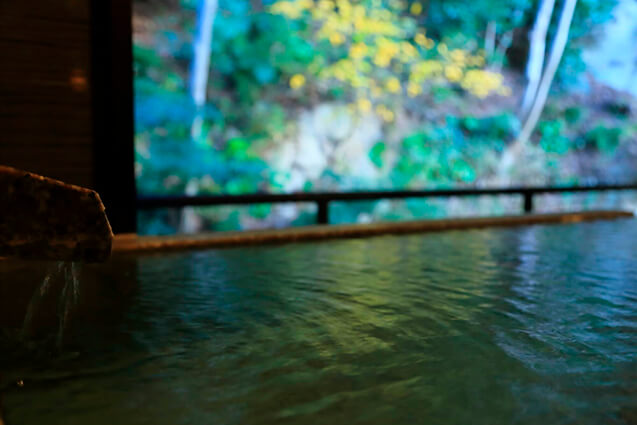 Its spa is marvelous, needless to say. The water of Shimogamo Springs is naturally salty, saltier than sea water. This is because the water has been contained in the benthic zone for more than 20 millions of years, which naturally discharges dissolving the minerals. The salt in the water adheres to your skin and warms up your body, a sensation that lingers for a long time. 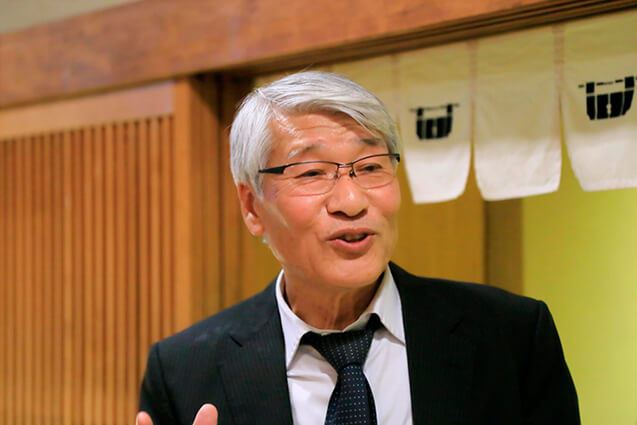 Mr. Sadai Yasuo, the president of Kikuta Group which manages five ryokans including Kagiya in the Izu Peninsula. 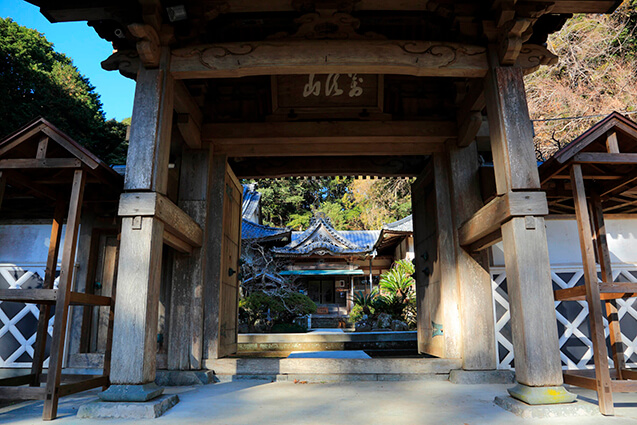 Many people may know the word kamikaze, but less may know its origin. The word dates back to the 13th century, when Mongol attempted to invade Japan two times. Both attempts failed because of kamikaze (literally meaning divine wind), which were actually the typhoons whose timing were perfect for Japan. On the other hand, less people including the Japanese know that a third attempt was ready to be made by Mongol. Before attacking by the military force, Mongol sent an important zen priest as an emissary for the negotiation. The Kamakura Shogunate was not that idiot to fall for the trick even though zen priests were highly respected at that time. The Shogunate arrested him and sent him to the Shuzen-ji (Shuzen Temple) in the central part of the Izu Peninsula to confine him. If this priest had been mediocre, the story would have ended here. But he was not. He spent his days in the temple doing ascetic training of zen, which made his fame spread all over Japan. Priests started to come to the Shuzen-ji to see him, and many of them asked for his remission. The Shogun at that time pardoned him and sent him to the Kencho-ji (Kencho Temple) in Kamakura which was in decline because of damage from an earthquake. This priest is Issan Kokushi, who established this Kiichi-ji in Matsuzaki-cho on the west coast of the Izu Peninsula in 1301. 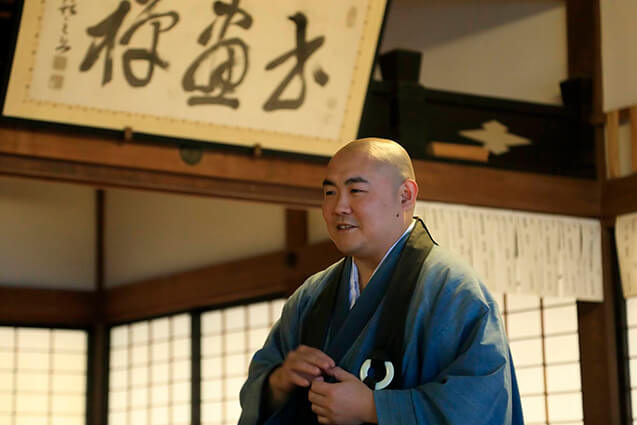 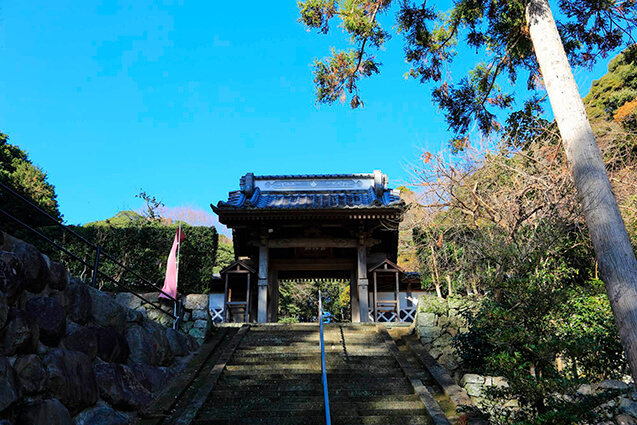 A long path with stone steps after the gate. The higher you go, the more solemnized you will feel. Trees are high and thick. The ground is covered with moss. All you see evokes the time that has passed. You also cannot miss the beautiful garden at the back of the hall. 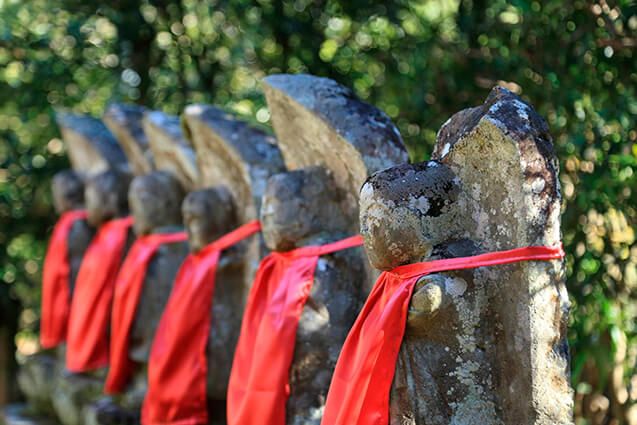 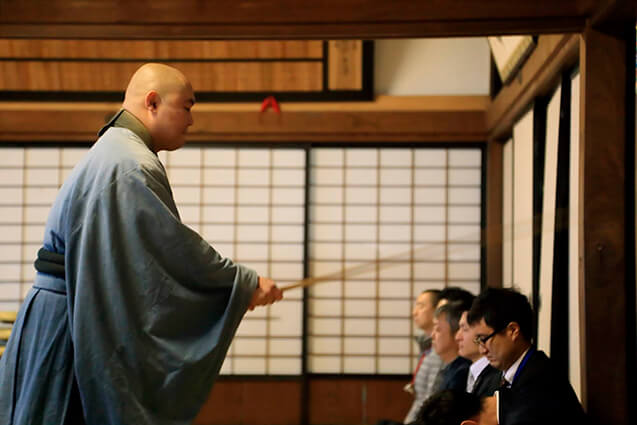 Kiichi-ji holds zazen sessions on request. Sutra drawing courses are also available with an advance reservation. Through the zazen session you will receive a reward, as well as the feeling of refreshment post-meditation. The priest will give you a name, even though you are not Buddhist or Japanese, taking your place of birth and your character into consideration. 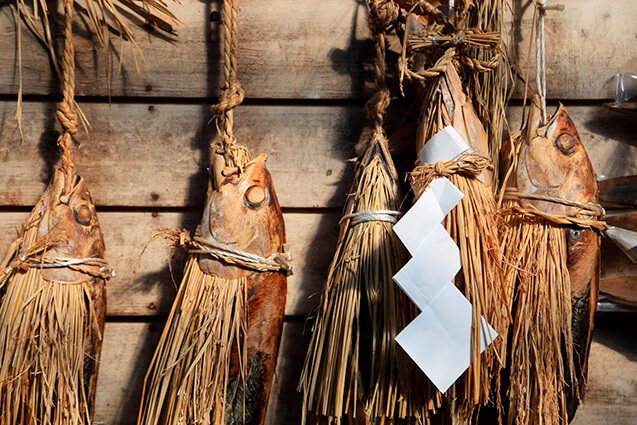 The town where Kanesa is located is well known as one of the three biggest producing areas of dried bonitoes. Bonitoes here are also preserved with salt called shiogatsuo, which is the local specialty.


“Today’s youth is the worst generation ever!” -- This complaint has repeatedly stated for two thousand years, even uttered by Greek philosophers like Plato and Socrates. If it is true, the evolution of human beings stopped more than two thousand years ago even though technology has developed. The development of the technology after the Industrial Revolution is astonishing. After the Digital Revolution, the leaps and bounds in technological advancement is even more impressive. Today’s new invention will be outdated by tomorrow. 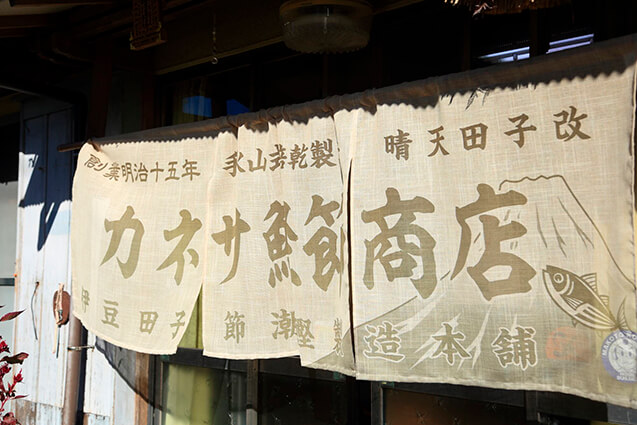 Kanesa is a maker and seller of dried bonito, which is already becoming a long forgotten tradition. Remarkably the method of production adopted is a very traditional one which has been continued since its establishment in 1882. It is the most inefficient and the most dangerous way to produce dried bonito. Today, when efficiency and safety are prioritized, Kanesa ignores these golden rules because the president and all the staff know that this is the best way to confine and to condense the deliciousness of bonitos. Freshly caught bonitos are cut horizontally into four pieces, and then are dried and fumigated over an open fire, which is the important and dangerous part. A man takes the fire’s temperature by hand to keep the best temperature for bonitos. To make the best dried bonitoes the best temperature is as high as possible, just before the bonitoes start to scorch. The temperature goes higher than 130 degree Celsius! This process is done repeatedly 10 to 15 times, and takes one month to be completed. Next, bones are removed, the minced bonito is rubbed so that the small holes are completely covered, and then is sun dried. A piece of dried bonito in Kanesa is made through over thirty processes, mostly done by hand. 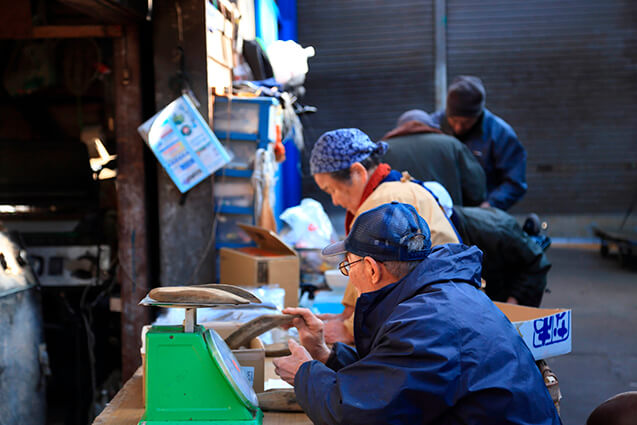 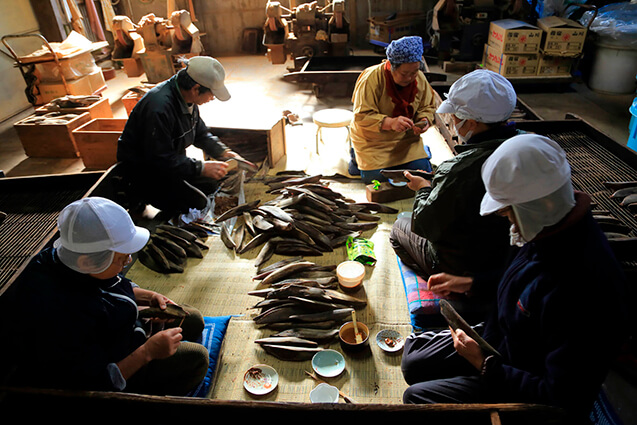 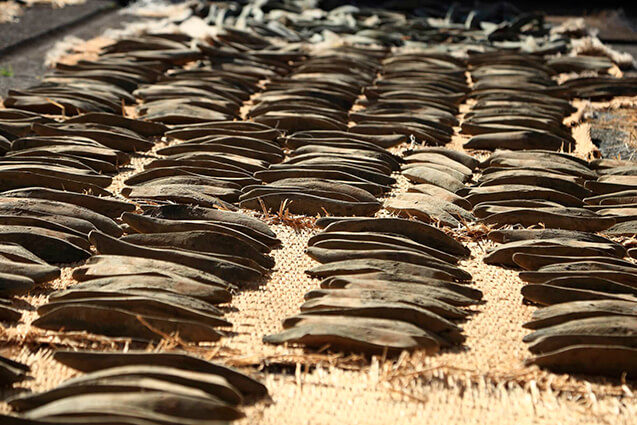 The dashi soup made from this dried bonito, containing the very best of the umami that bonito has, is perfectly transparent and full of savor. “It is your own choice whether you eat the best food taking time and labor or you eat ordinary food saving time and labor,” says the president of Kanesa. 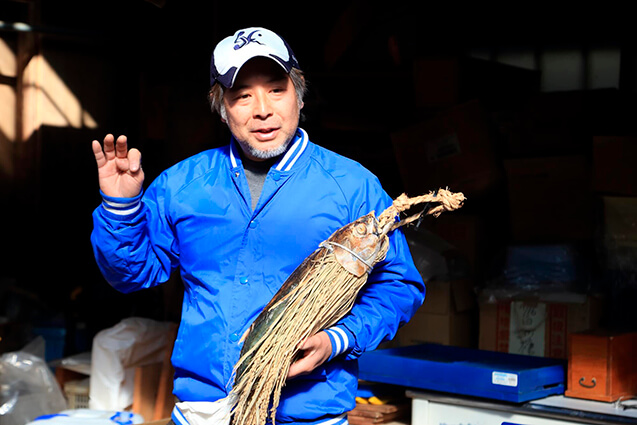 Mr. Yasuhisa Serizawa, the 5th-generation president of Kanesa.
A production tour and a short course on how to scrape a dried bonito is available in Kanesa but you have to take an interpreter or guide with you. 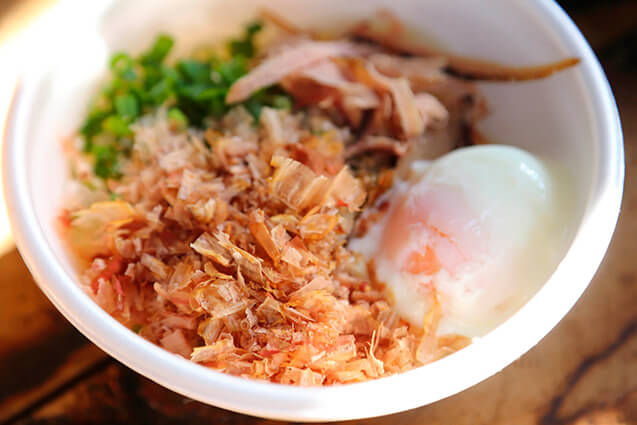 Udon noodles (or even spaghetti!) seasoned with bonito flakes and shiogatsuo is divine!


Kogane-zaki (The Golden Cape)
When the Sky and Ocean Are Red, the Cape Glitters in Gold 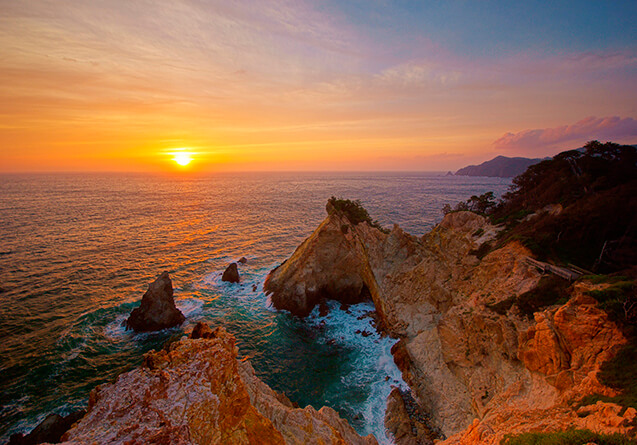 If you visit the west coast of the Izu Peninsula, you should aim to be there at the time of sunset. Here you can see the sun set over the ocean. Especially at Kogane-zaki (literally meaning the Golden Cape) as true to its name, the surface of the rocky walls glitters like gold in the sunset. This is caused by the volcanic components of the rocks. 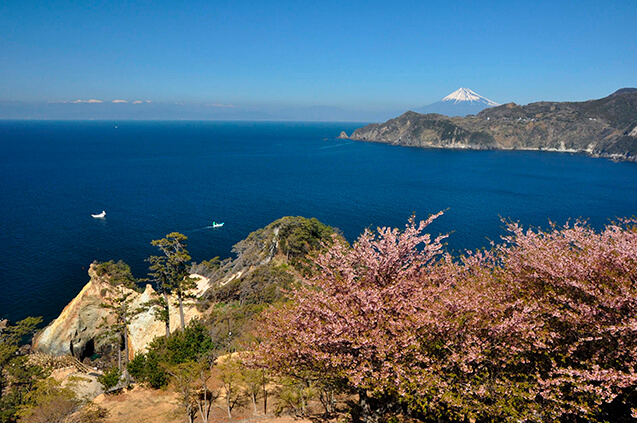 At the Cape Koganezaki, all the cape is designated as a park. You can relish the magnificent view from the observation deck and also stroll along the promenade.
If you are lucky enough and the sky is clear, you will see Mt. Fuji over the ocean. 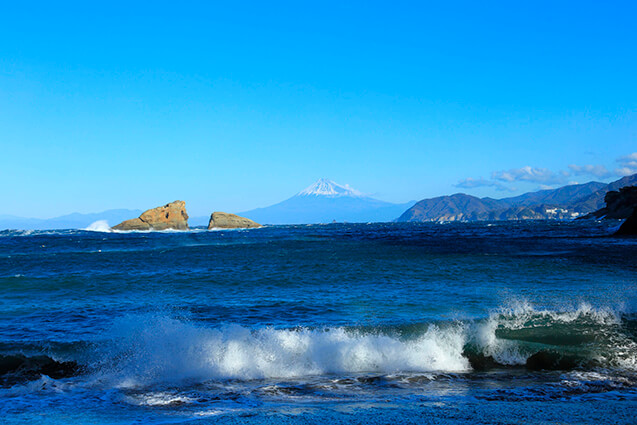 If you are lucky enough and the sky is clear, you will see Mt. Fuji over the ocean.

Vol.8 The Izu Peninsula (South and West Coast) in Shizuoka Prefecture
The Peninsula That Encapsulates All the Best Features of Japan
Unwind Your Mind in 20 Million-Year-Old Water