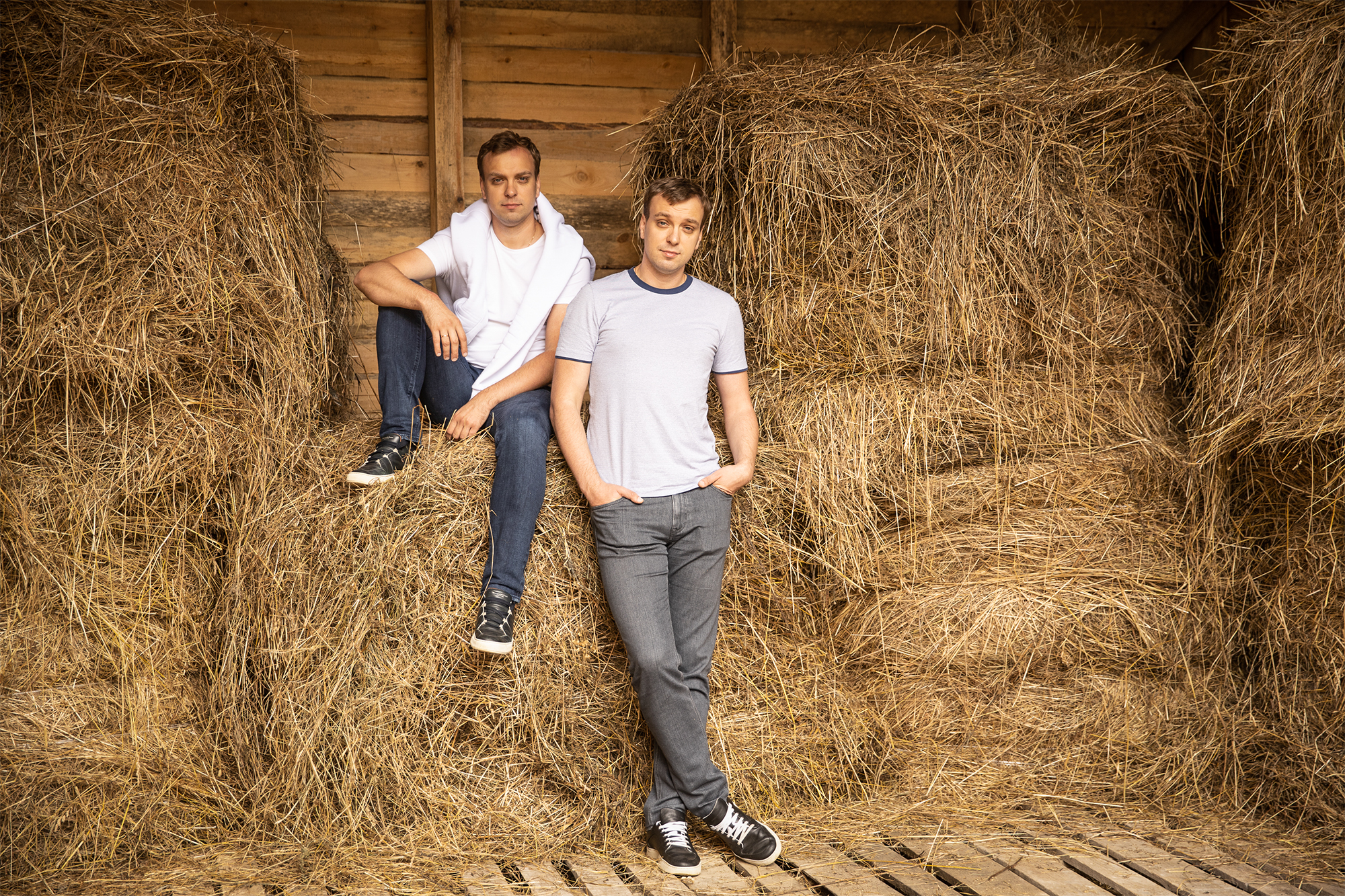 With chutzpah and ingenuity, Moscow is emerging as a global dining hub.

This autumn, Michelin unveiled its inaugural guide for Moscow — the company’s first foray into Russia. Of the 69 venues recognized in the 2022 Red Guide, nine received one or more stars; two restaurants — Twins Garden and Artest — were awarded two stars, while three establishments received a Green Star, Michelin’s award for sustainable gastronomy.

That’s a far cry from the city’s image a decade ago, when Moscow’s restaurants were infamous for relying on pricey imported ingredients and prioritizing style over substance. Ironically, the capital’s rise as an unlikely gastronomic hub is the happy result of a bitter political conflict. After Western nations slapped sanctions on Russia following the 2014 crisis in Ukraine, President Vladimir Putin retaliated with a ban on most foreign foodstuffs. At that time, the country imported more than 40% of its food. Immediately after the edict was issued, however, delicacies such as Parmesan cheese and French foie gras disappeared from shelves. 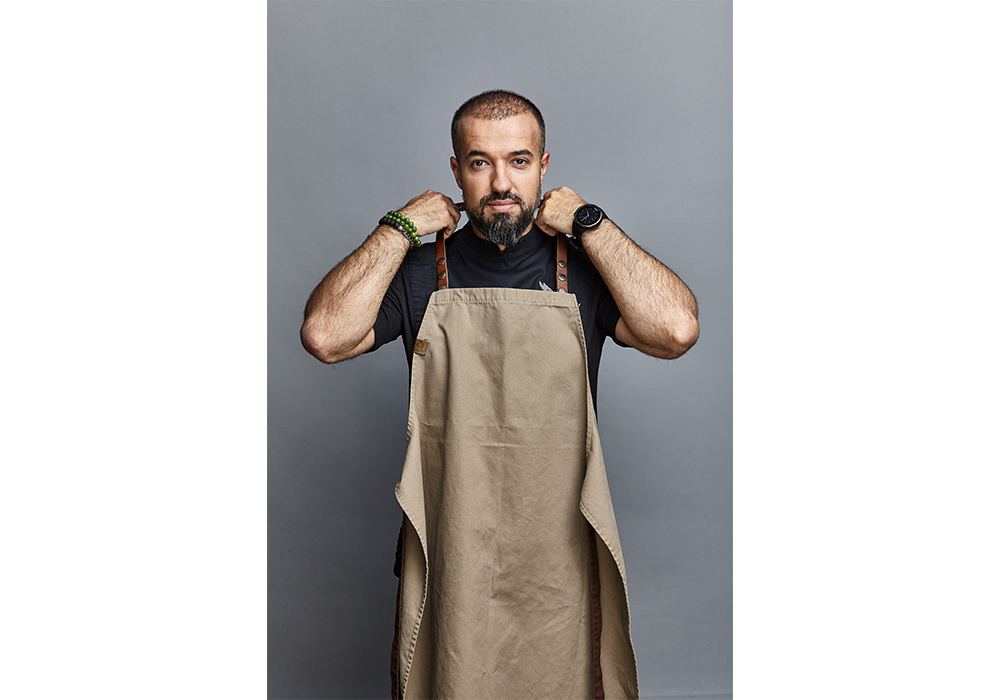 Inventive chefs embraced the trend. Vladimir Mukhin made “new Russian cuisine” the cornerstone of his approach at Michelin-starred White Rabbit, which debuted in 2012. Mukhin’s daring menus took inspiration from history, featuring dishes like bread made with birch-bark flour — a traditional ingredient along the Volga River, born of scarcity — and pickled Russian pineapple, a prized fruit cultivated in greenhouses by nobles during the 18th century.

In 2014, brothers Sergey and Ivan Berezutskiy opened Twins, a restaurant focused exclusively on the bounty of the country’s vast terrain — a landmass spanning 11 time zones. 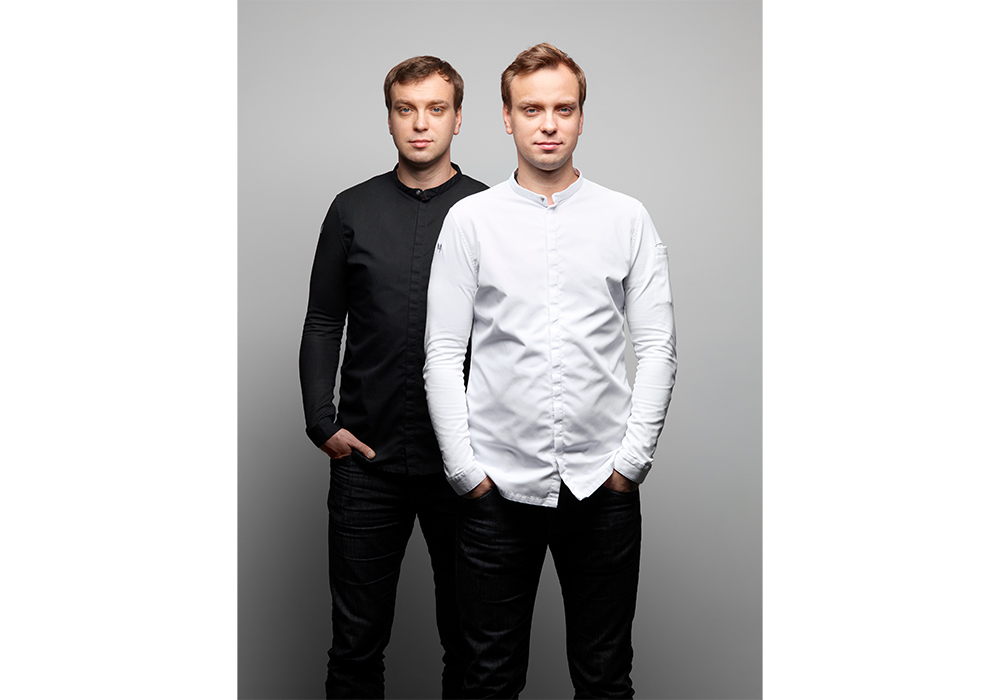 “That wasn’t new for us because we were both doing it separately at our restaurants in Moscow and St. Petersburg…When we joined each other, the power doubled,” Sergey said.

Three years later, the duo took the concept of terroir to another level, launching a new restaurant, Twins Garden, along with their own farm, which now supplies around 70% of the restaurant’s produce. According to Ivan, the Berezutskiys started the farm to recapture “the memory of perfect, fresh vegetables” that they experienced helping with harvests at their grandparents’ dacha in southwestern Russia. 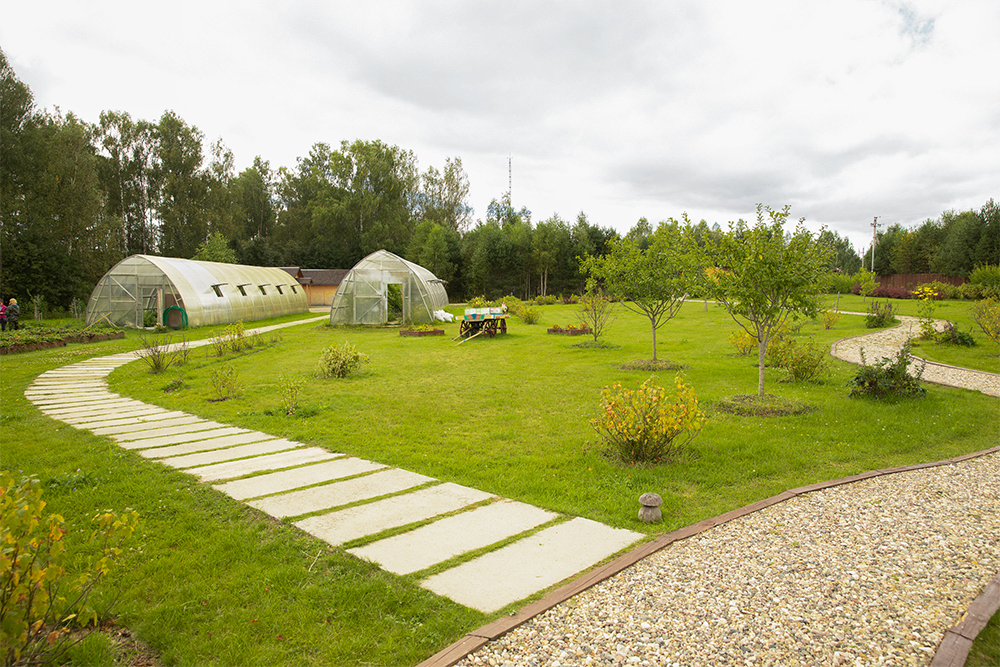 Located two and a half hours south of Moscow, the Berezutskiys’ farm supplies roughly 70% of the produce served at Twins Garden.

Now, Mukhin and the Berezutskiys are leading the city’s food nascent sustainability movement. At White Rabbit, plant-based creations — such as dolmas stuffed with textured protein synthesized from legumes — take center stage. A satisfying dish of pumpkin rind and pumpkin seeds, served with black caviar and a sauce flavored with koji, makes use of hollowed out gourds that the chef had used as pickling vessels.

“In the past year, we’ve managed to reduce food waste by 300 kilograms per month,” Mukhin said. 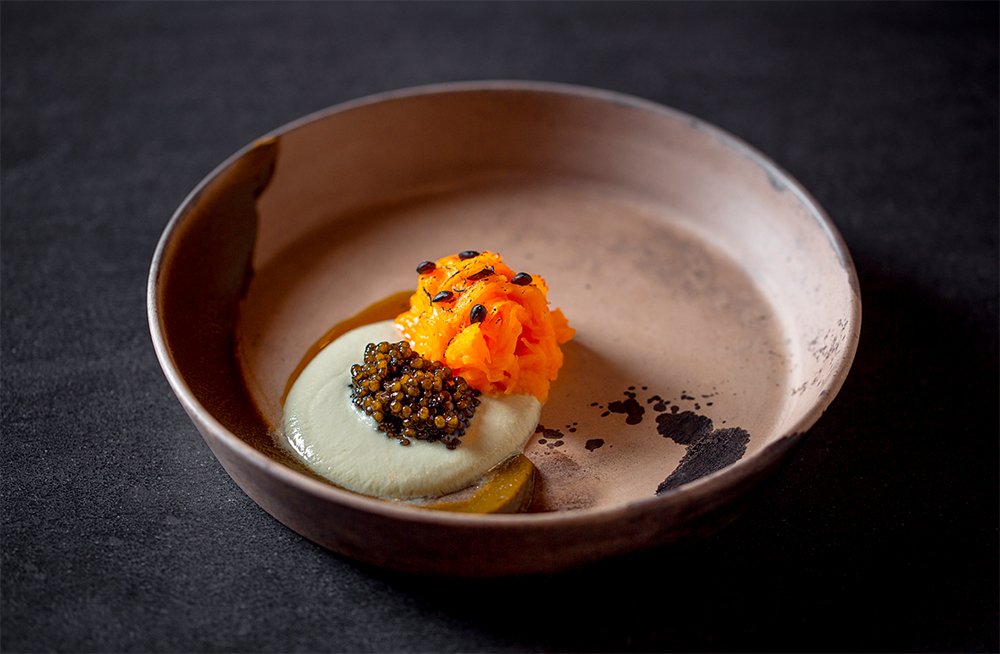 Inside the lab at Twins Garden, which was awarded a Green Star in addition to the coveted two-star distinction, oyster mushrooms sprout from logs on a metal shelf, and a 3D printer layers dots of white bean paste seasoned with marinated seaweed onto a tray. The mixture forms the base of vegetarian “squid,” which is served grilled, alongside pieces of natural squid prepared the same way. The ersatz version bears a striking resemblance to the real thing. 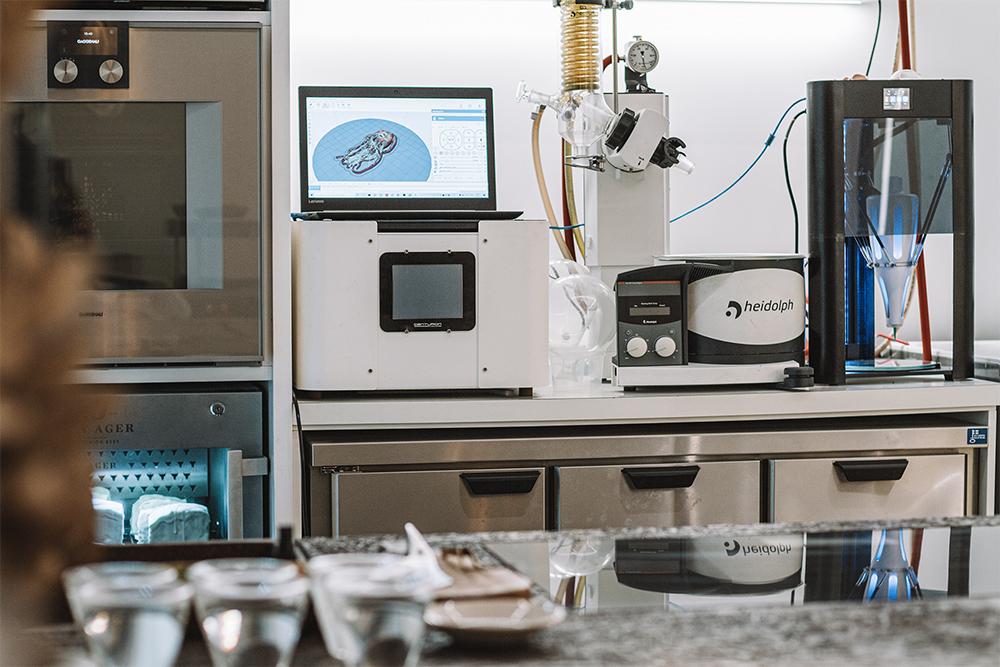 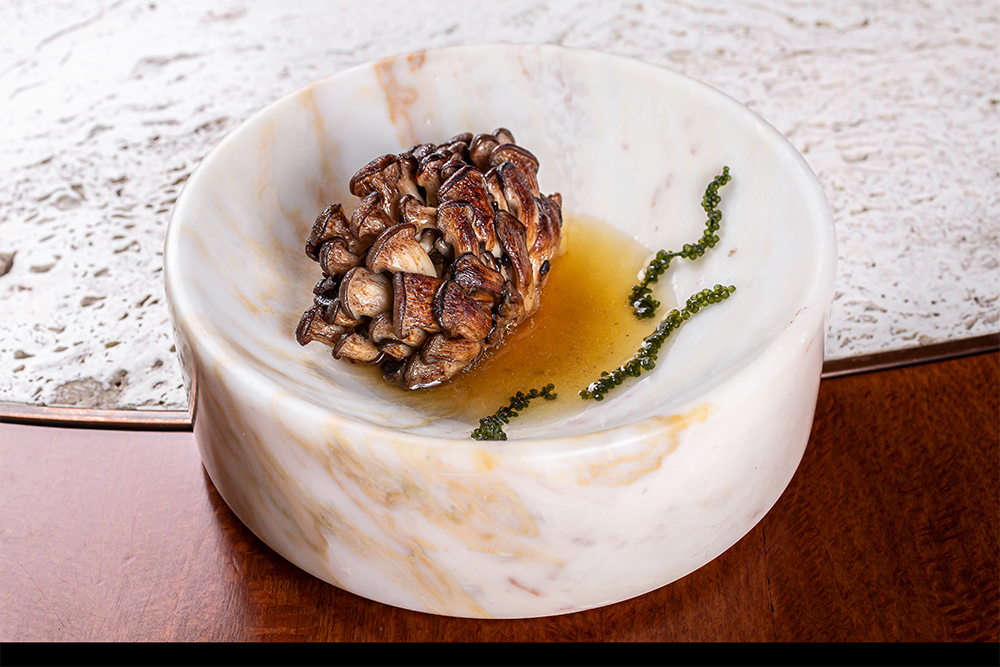 The twins have already used the technology to create plant-based sea urchin and are working on a prototype for vegetarian shrimp. At the moment, they’re using their kitchen wizardry to turn potato peels and fat trimmings into a no-waste winter delicacy.

White Rabbit and Twins have paved the way for a new wave of chefs who are raising awareness of sustainability. Nikita Poderyagin, 26, recreates exotic flavors using strictly local ingredients at his Scandinavian-inflected, zero-waste restaurant Bjorn, which won a Green Star. Poderyagin brings his background as a perfumer to bear in creations such as “vanilla” ice cream made from pine nuts and fermented cedar bark — an ingredient rich in guaiacol, which yields vanillin during fermentation. 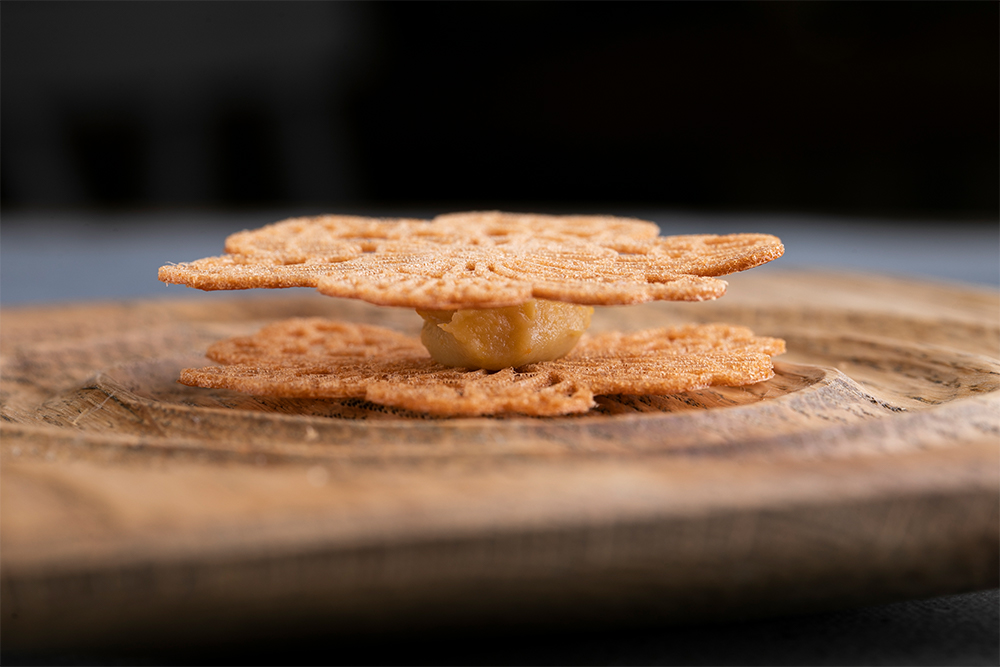 At Bjorn, pine-nut “vanilla” ice cream is served with “banana” made from oxidized goatsbeard root (a relative of salsify).

At historical restaurant Beluga, Evgeny Vikentev, the youngest chef to receive a star in the Moscow Michelin Guide, challenges traditional ideas of luxury in dishes such as ostrich tartare topped with ice cream made from surplus sea urchin, and a dessert of foraged ground elder with sour cream.

Beluga’s ostrich tartare is finished with ice cream made with surplus sea urchin. 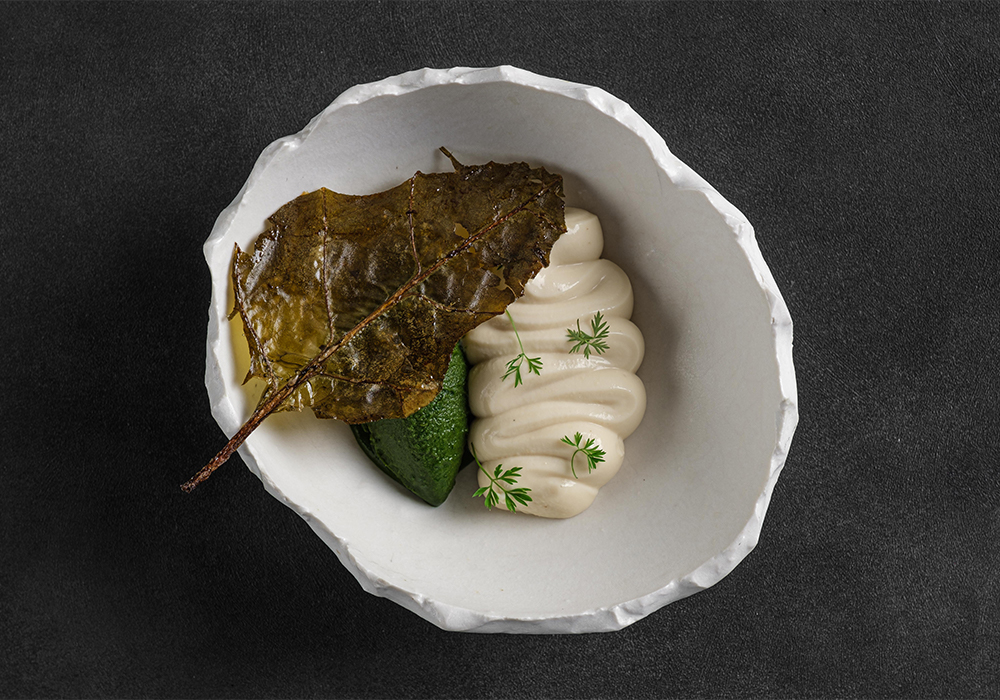 Foraged ground elder with sour cream is one of the most popular desserts at Beluga.

“This (ground elder) plant is growing all around us, but nobody uses it,” Vikentev observed. 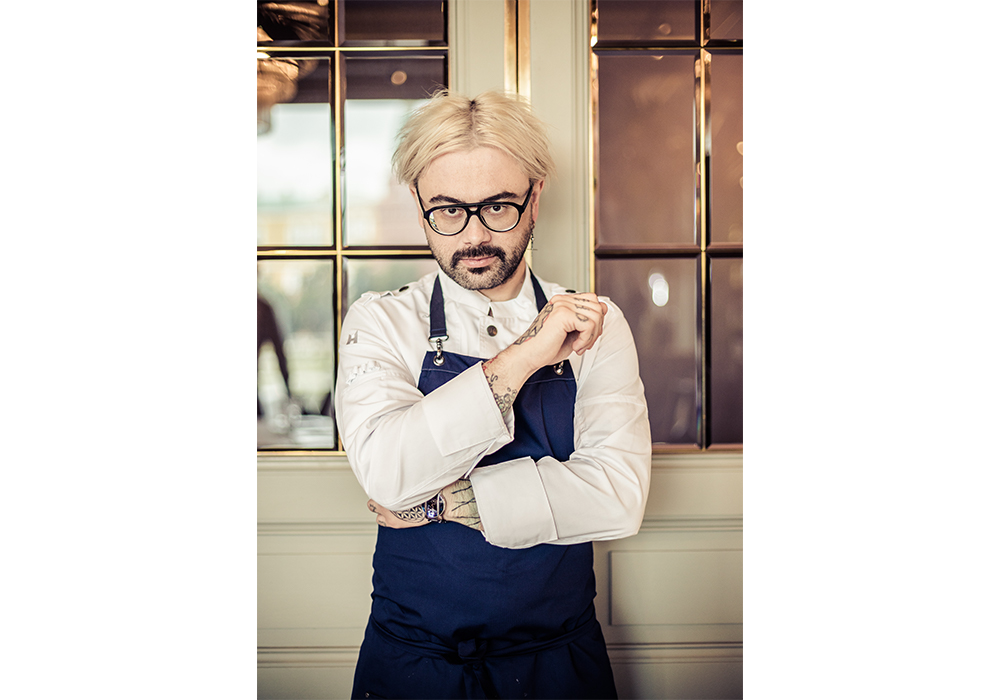 A native of St. Petersburg, Evgeny Vikentev ran restaurants in Berlin before returning to Russia to helm Beluga.

Eyes will be on the Russian capital again in July, when the city plans to host the World’s 50 Best Restaurants awards ceremony.

“This is a huge chance for chefs in Moscow to show what we can do,” Ivan Berezutsukiy said. 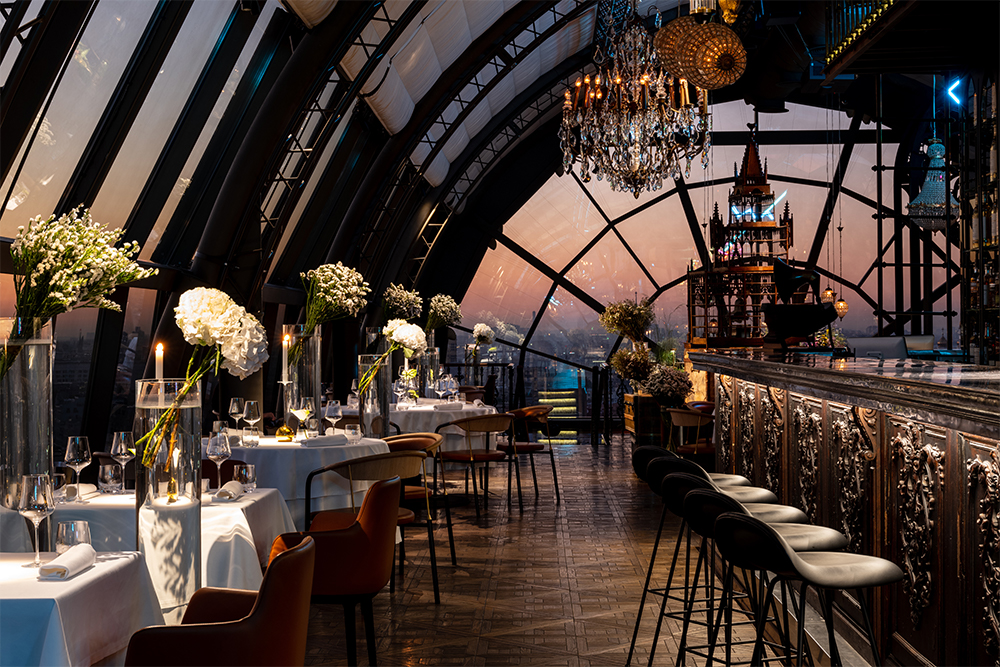 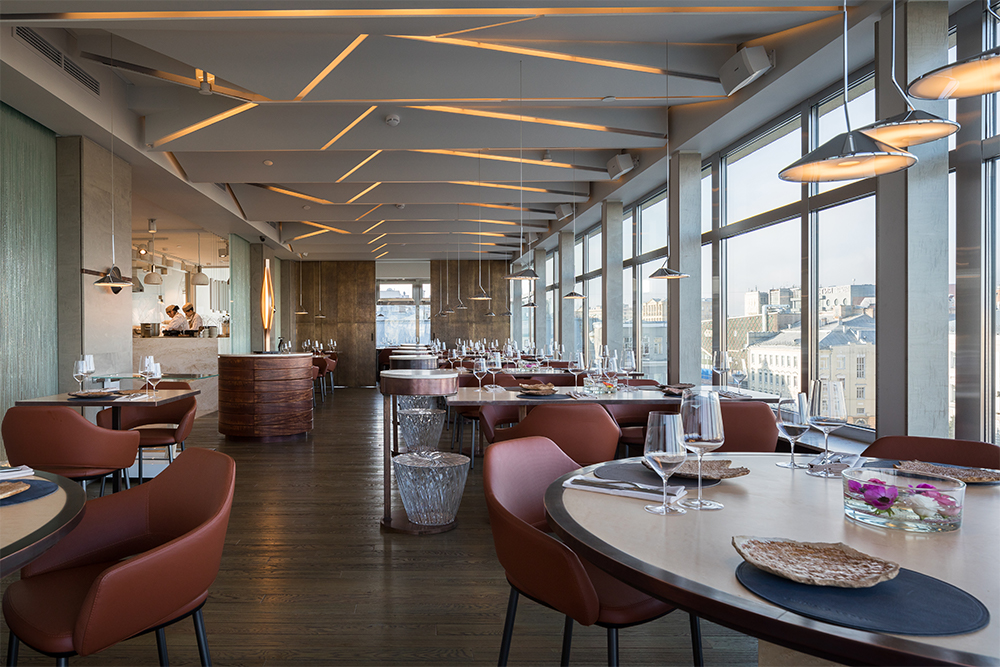 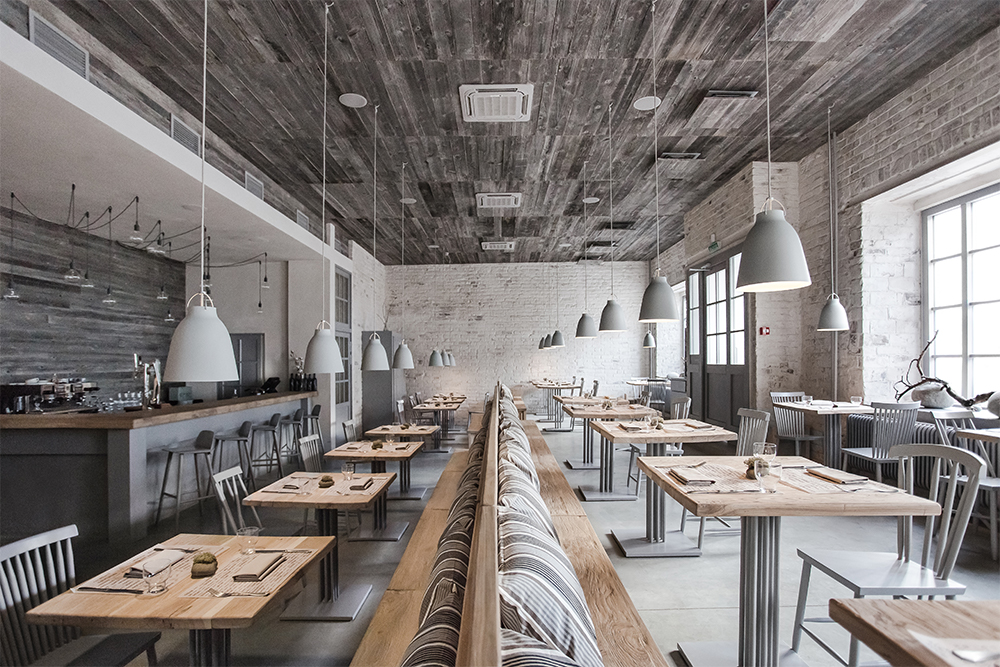 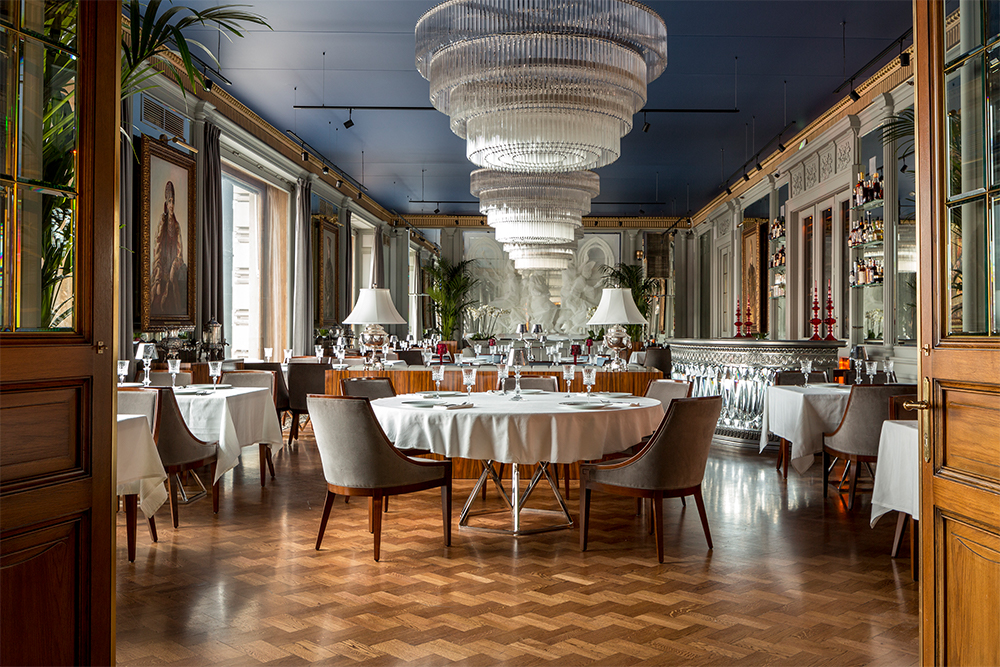