In the mountains of Yamagata, innovation is brewing 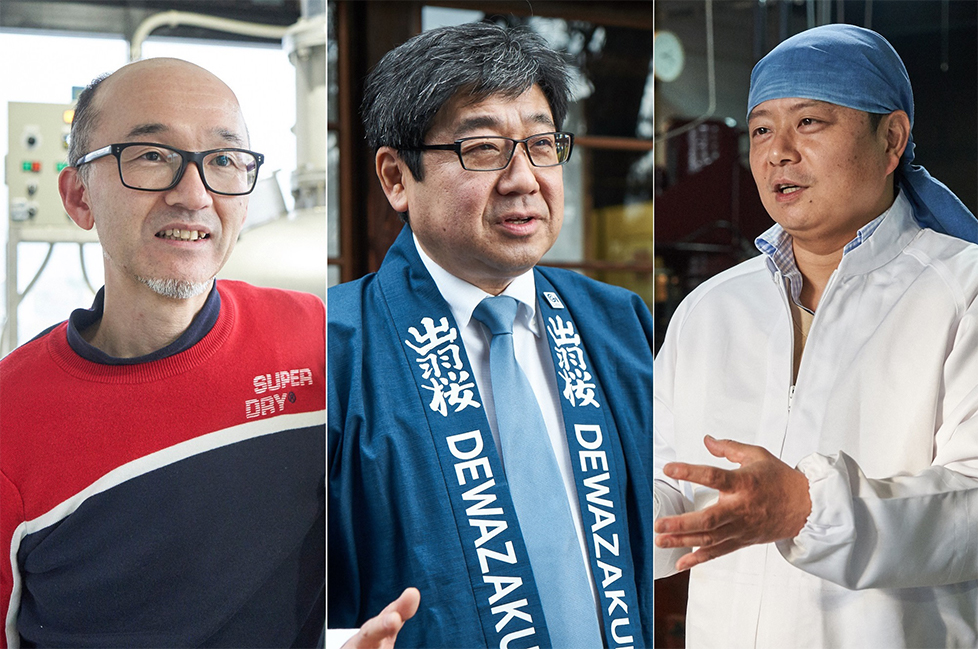 A drizzly November morning, steam wafts up to the ceiling beams inside the Dewazakura Shuzo sake brewery in Tendo City. Workers shovel freshly steamed rice – which will be added to today’s batches of fermenting brews – from the massive steaming vat in the middle of the room onto mats for cooling. 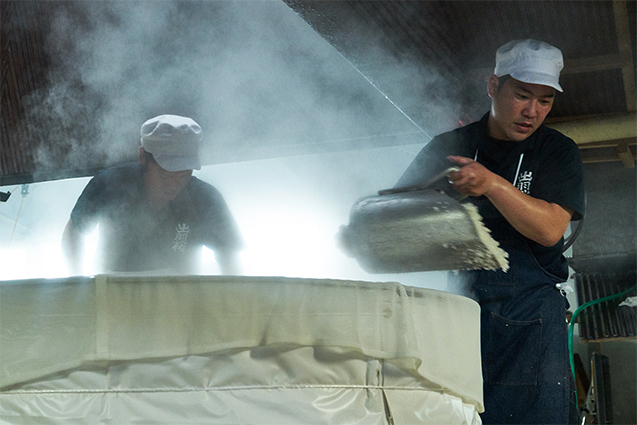 There are, in fact, several apprentices on the floor this morning, hailing from all over Japan. Over the years, Dewazakura has hosted young brewers from roughly 20 breweries, who come for a few weeks – up to a few years – to gain hands-on experience from one of the country’s top sake makers.

“As a business, we don’t gain any profit from this, but it benefits the entire industry to share knowledge,” he says, noting that the brewery regularly participates in annual workshops with other local sake producers to exchange information and contribute to a pool of open technology. 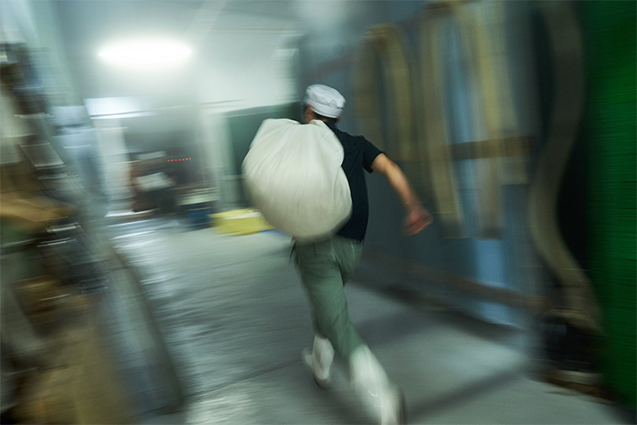 Founded in 1892, Dewazakura has been a pioneering force in the field, credited with bringing premium ginjo-grade sake (made with rice polished to at least 50 percent) to the retail market. Prior to the release of its signature ”Dewazakura Ouka Ginjo” in 1980, highly aromatic ginjo-style brews had been made exclusively for competitions, not everyday consumption.

Dewazakura literally changed sake history, giving wider audiences a taste for the refined styles that helped fuel the international sake boom of the past decade. The brewery was also one of the first to champion local rice varieties such as ” Dewasansan” and push for Yamagata’s sake to be protected under an official geographical indication (GI) – the region’s answer to the French appellation system. 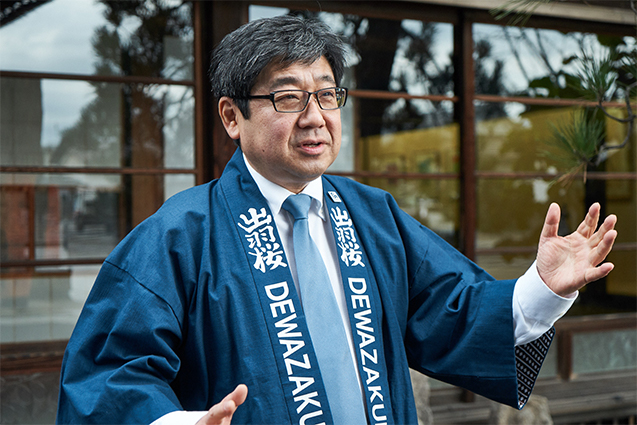 “We strive to make ‘sake for the people’ that can be enjoyed by folks everywhere – both globally and right here at home,” says fourth-generation president Masumi Nakano. He explains that accessibility and “the human touch” are core concepts of the company. 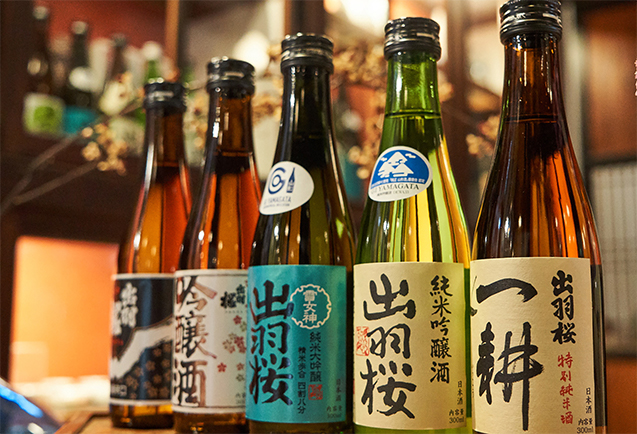 Sake has long been an integral part of Yamagata’s rich food culture. The drink has the power to bring people closer together, whether sharing a glass with friends (and sometimes strangers) at a casual izakaya or toasting over a Zoom happy hour. For the brewers of Yamagata, it represents a point of universal connection – between humans and the natural landscape as well as the past and the future. As a result, the area’s sake producers lead in innovation and collaboration, and the region’s brews are among the most highly revered around the world.

At nearby Mitobe Shuzo sake brewery, which produces the brand “Yamagata Masamune”, tradition and innovation go hand in hand. Like Mr.Nakano, fifth-generation brewery head Tomonobu Mitobe takes a global approach to sake-making, but his heart is firmly rooted in his hometown. Mitobe Shuzo has recently launched his own rice farming company “Mitobe Inazou”. 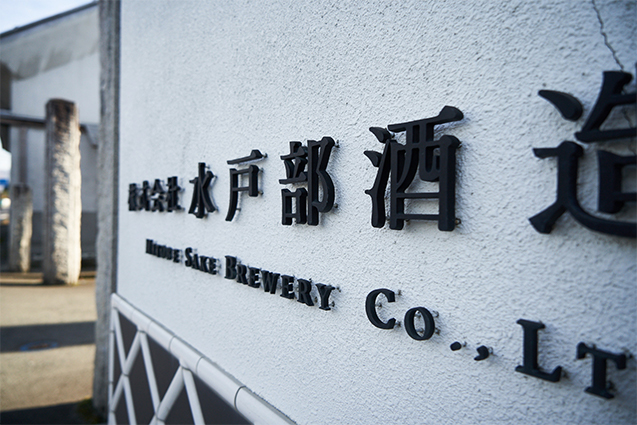 Sake’s terroir, Mr.Mitobe explains, encompasses more than rice. “Our sake is characterized by its crisp, clean finish, which comes from the hard water we use for brewing,” he says. While most of the water in Tendo is soft, variations in mineral content create “micro-terroirs” that lend impressive breadth to the region’s sake. 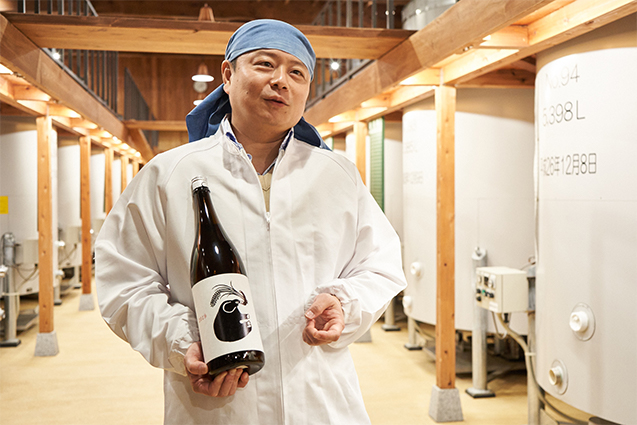 “Each brewer’s philosophy and way of making sake is also different. You could say that the styles of sake in Yamagata are like pages in a human book,” he chuckles, standing before the brewery’s fune sake press, a traditional device used to separate the liquid from the lees by filling cloth bags with sake and applying gentle, steady pressure. The method yields a smoother-textured, more delicate tipple. 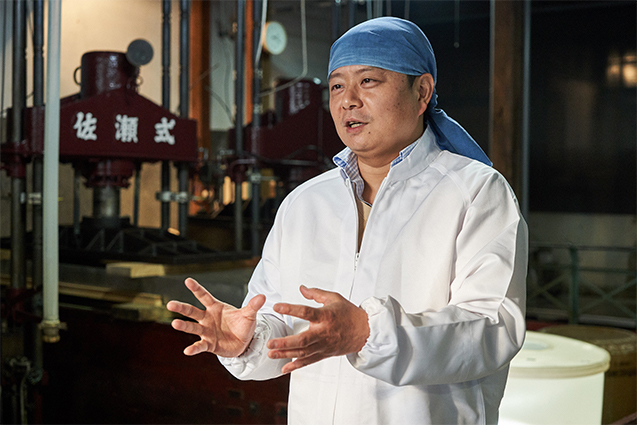 Mr.Mitobe who travels frequently to Europe, was inspired to invent a new style of sake after meeting a prosciutto di parma producer in Italy. He hit upon the idea of using the winemaking technique of malolactic fermentation, which converts tart malic acids into softer lactic acids, to create Yamagata Masamune Malola. The result is a fruity brew with hints of cantaloupe and rounded acidity that, when warmed, marries beautifully with cured ham.

Following in the footsteps of the area’s sake brewers, craft beer producers are also pushing boundaries, experimenting with exciting new flavors and techniques. In February 2020, brewer Katsuaki Kato set up Brewlab.108 in a corner of the Shogimura / Tendo Tower, a sprawling complex topped by a giant sign shaped like a game piece used to play shogi, or Japanese chess (the area is known for producing wooden shogi pieces). It is, perhaps, the last place you’d expect to find a brewery, but Kato is no ordinary beer maker. 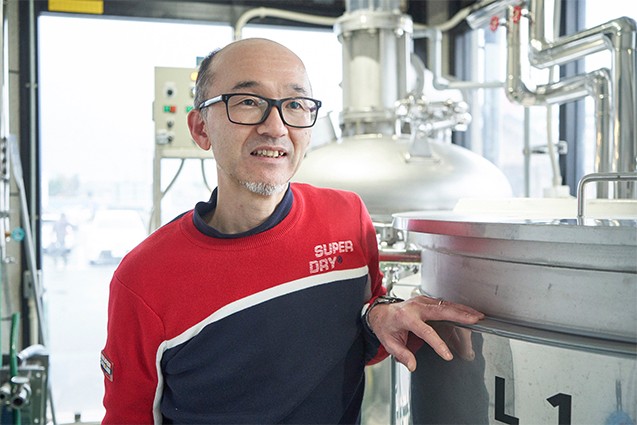 An engineer by trade, he runs the microbrewery as a side project while working as a manager for pharmaceuticals company . The idea began percolating when he was stationed in Saudi Arabia, where alcohol is strictly prohibited, for two years.

“I researched brewing online and contemplated doing it myself someday as a hobby. I had no experience, but I thought I could figure it out as an engineer,” he says.

When he and his wife relocated to Yamagata in 2016, he started his experiments in earnest. As luck would have it, Taro Kumagai, owner of sake shop “La Jomon”, was living in the same building. A sake brewer known for producing collaborative projects with various brewers, Mr.Kumagai introduced his neighbor to his network of producers, including related person of Ichiraku Ryokan, who run Tendo Brewery.

At the end of 2017, Mr.Kato started a year-long apprenticeship at Tendo Brewery, working on the weekends while keeping his day job. Later, he continued honing his skills for another six months at Gassan Beer before launching Brewlab.108 in 2019. 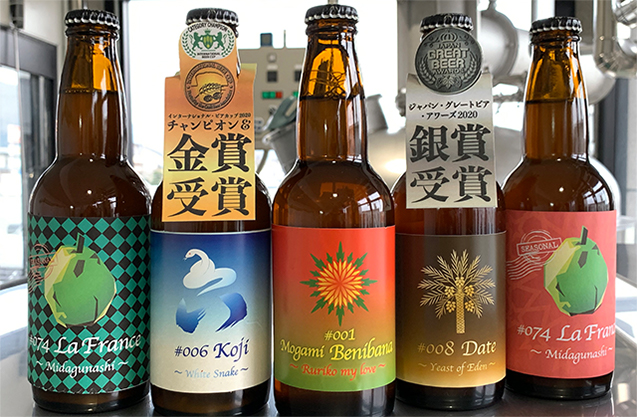 The company’s seven varieties incorporate local fruits such as apples from Tendo, as well as exotic additions like dates from Dubai. Working with Kumagai, the brewery released #006 Koji White Snake, a lightly cloudy wheat beer made with sake yeast and koji (the rice-based catalyst that converts starch to sugar in sake and shochu-making). In November, the beer was awarded a gold medal in the Sake Yeast category and the category champion of Japan Origin category of the International Beer Cup 2020

The brewery’s name pays homage to Kato’s favorite izakaya in Tokyo and is also a reference to his desire “to make 108 kinds of beer.”

“It has one more meaning,” he admits, flashing a sheepish grin at his wife. “Our anniversary is October 8.”It makes perfect sense. After all, brewing is a labor of love.