Chef and sommelier visiting the Tomi no Oka Winery 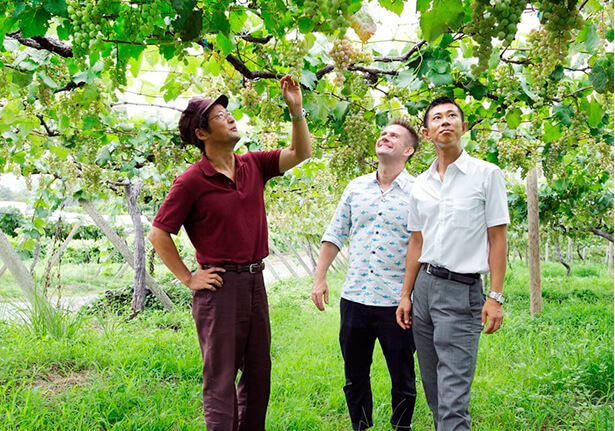 Executive Chef Gerhard Passrugger and Sommelier Mototsugu Asada, both of the Andaz Tokyo restaurant opened in 2014, recently visited Tomi no Oka Winery. As part of a hotel that prides itself on embracing the culture unique to its location, their interest in Japanese wines is especially high.

An internationally practiced chef with experience in Europe, Australia, and Asia.

After working at Tokyo’s top hotels and restaurants, he was appointed to his current position when the restaurant opened last year.

A winery manager devoting himself to growing grapes, focusing on soil and exploring the “appropriate land and grape variety.”

Seeing the reason that unique characteristics are clearly expressed!─

“Andaz Tokyo is a place that deeply reflects the local region in terms of our interior decor, service, and food,” said Executive Chef Gerhard Passrugger. Just as wine expresses the characteristics of the land where it was produced, international hotels have also come to reflect the identity of the country where they are located. Gerhard’s visit to Tomi no Oka Winery with sommelier Tomotsugu Asada in late August of 2015 was also to help deepen his knowledge of Japan’s food culture.

On that day at Tomi no Oka Winery, Chardonnay and Riesling Forte grapes were being harvested on a trial basis. Winery Executive Director Naoki Watanabe gave a tour of the vineyard while explaining this year’s crop. “This year we had a bumper crop, with large grape clusters and a good growth overall,” he noted. Gerhard sampled a grape in the Merlot vineyard, exclaiming, “Delicious!” Mr. Watanabe replied with the explanation that “Merlot grapes will be further ripened on the vine for about another month or month and a half.” It is important for them to be matured all the way down to their seeds. As harvest time approaches, the sugar content is measured and the grapes are tasted to make sure the seeds have ripened to the point of taking on a rich, nutty flavor. Once this is done, harvest day is decided.

As he examined the vines, Mr. Asada commented on the abundance of leaves and fewer number of grape bunches. Mr. Watanabe agreed, further explaining that because there is more moisture in the air in Japan, there is less photosynthesis taking place in each leaf compared to vines in Europe. Thus, the vines must grow more leaves. On the other hand, for the fruit itself, disbudding and crop thinning clusters will leave each branch with only one cluster. Nutrients are thereby concentrated into this one cluster to condense the flavor. When Mr. Asada also pointed out the unique combined usage of hedgerow and trellis grapevine cultivation techniques, Mr. Watanabe explained that Tomi no Oka Winery’s history of more than one hundred years began with hedgerows, subsequently shifting to trellises. Yet, in the last ten years, a return to hedgerow cultivation has continued to progress. The cultivation technique chosen is dependent upon the individual characteristics of each grape varietal. For example, since Koshu has a high level of tree vigor, trellis cultivation takes advantage of the vine’s ability to extend its branches. Gerhard was quite taken with the sight of the Koshu grape clusters, likening their appearance to chandeliers.

During a tasting session of the vineyard’s entire lineup, it was explained that wines are produced by altering the harvest timing for grapes such as Chardonnay depending on the characteristics of the vineyard. Fermentation is divided between tanks and barrels, and the separately fermented wines are later combined. Upon hearing this, Gerhard’s expression was one of satisfaction as he made the comment: “With the different grape varieties grown and fermented using methods appropriate for each, I can see the reason why the unique characteristics of the soil and grapes come out so clearly in each wine. I can especially feel the robust structure and bright nuance of the Tomi White.” 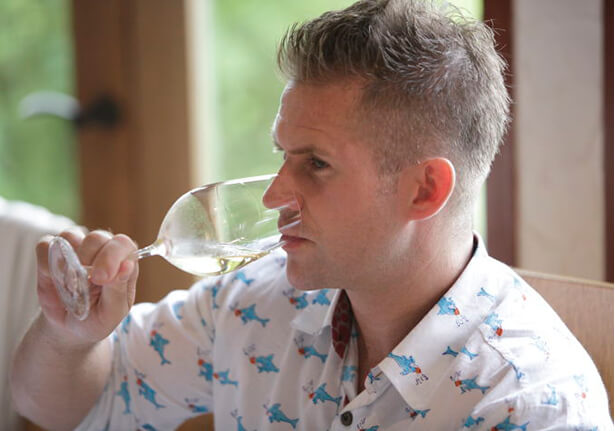 It has a firm structure. Full-bodied, while still having a fresh and youthful feeling. （Gerhard Passrugger） 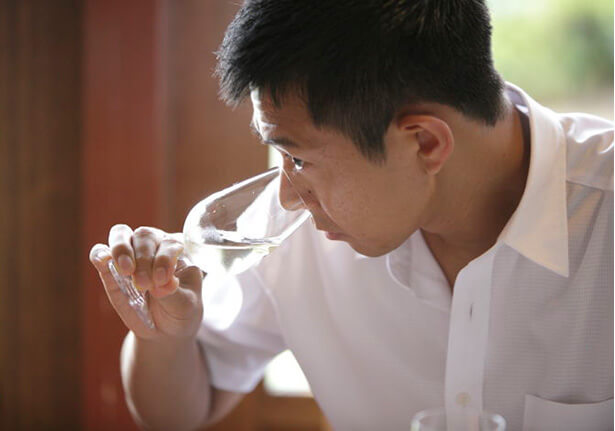 Concentrated fruit flavors with a tropical nuance create a dense wine that ends with a clean acidity. （Mototsugu Asada） 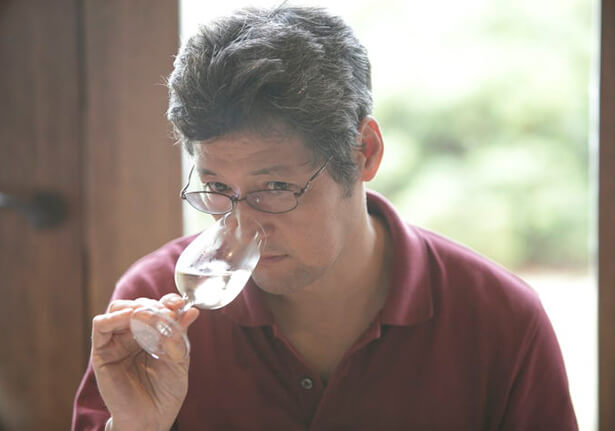 Grapes from a select section of the vineyard are fermented in small barrels. The wine is condensed yet relaxed. Just the right amount of tartness lingers comfortably for the finish. （Naoki Watanabe） 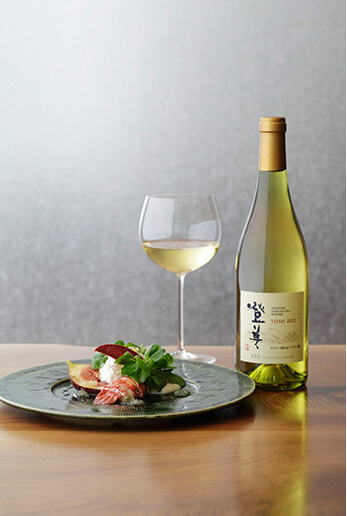 “Tomi White 2012 is a great wine; it has the traditional feeling of a typical Burgundy Chardonnay, while also being lively and light,” said Chef Gerhard. This classic full-bodied taste is paired with the sophisticated umami flavor of lobster and the creamy taste of burrata. Mâche and finger lime provides a light feeling. Further adding the sweetness of figs and maple syrup brings the dish together in total harmony. 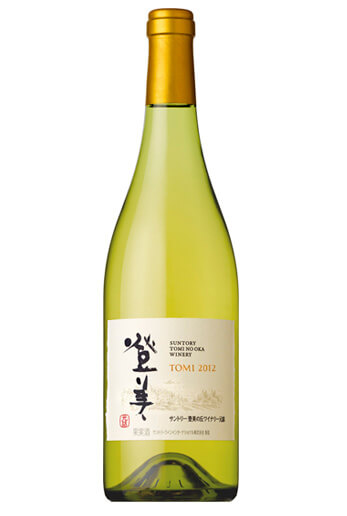 Tomi White 2012
100% Chardonnay
The fragrant aroma of nuts and flint in harmony with the aroma of yellow peaches, pineapple and tropical fruits. A frull-bodied mellow flavor spreads throughtout the month. At the finish one feels a hint of acidity leaving a pleasant aftertaste.

About Suntory Tomi no Oka Winery
Established in 1909 on a hill approximately 600 meters above sea level overlooking the Kofu Basin with a scenic view of Mt. Fuji to the south. The winery aims to produce Japanese wine that will awe wine lovers across the globe, taking advantage of the 3 positive conditions essential to cultivating a good grape: 1. long sunshine hours, 2. low rainfall and 3. large temperature difference between day and night. The winery has won many prizes at competitions both domestic and international.Learn more.