In December 2014, Tsuruoka became the first ever Japanese city to join the UNESCO Creative Cities Network as a “City of Gastronomy.”*
Tsuruoka’s distinctive geography, characterized by rich variations among mountains, plains, rivers and the sea, and its natural environment which allows a fulsome experience of the changing seasons has been behind the nurturing of its bountiful gastronomical culture. The city is blessed with various cuisines inherent to the locality. Along with the heritage of the approximately 50 species of indigenous crop plants referred to as “living cultural assets” which have been passed down over the generations, and of the city’s diverse hometown cuisine and the traditional dishes found in households, this cuisine includes the vegetarian dishes developed for sustenance and which have been passed down from the mountain priests of Dewasanzan. This diverse cuisine has merged with the everyday life of the locality, with a major characteristic of Tsuruoka’s gastronomical culture being the new examples of originality and ingenuity added by modern hands.

Opening of FOODEVER TSURUOKA - A market for Tsuruoka’s gastronomical culture! 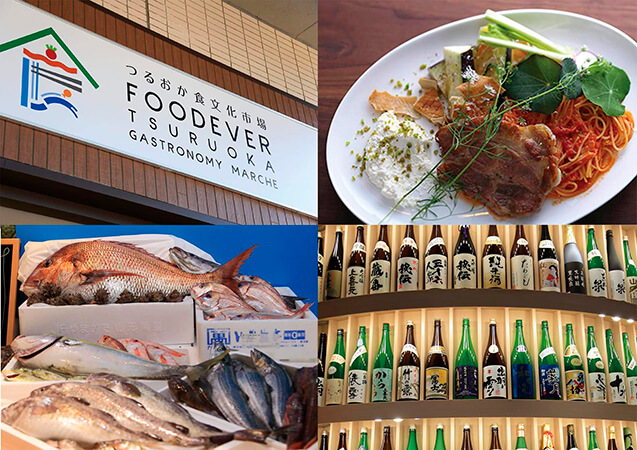 In July of 2017 the FOODEVER TSURUOKA Gastronomy Marché opened in front of Tsuruoka station. It is a composite facility which brings together restaurants, markets, and tourist information under one roof. It is anticipated to allow many people, including tourists to Tsuruoka to enjoy Tsuruoka’s diverse range of cuisine, and to become a waypoint for departure to various tourist hotspots.

FOODEVER TSURUOKA embodies the sense of “Wanting to liven up Tsuruoka from in front of the station” and the sense of the region of Chef Masayuki Okuda of Al-Ché-ccianno, who has advised FOODEVER since its conception.
There are 13 shops with various individual characteristics, with Farinamore restaurant, which makes liberal use of ingredients locally sourced from Tsuruoka, of note. Rather than each shop being individually managed, they are characterized by their intimately interlinked management structure, and a failsafe collaborative system to actively reduce food loss and secure and nurture human resources by means of their sharing of ingredients used with no regard to barriers between shops. FOODEVER TSURUOKA is also being leveraged as an initiative to revitalize the local economy of Tsuruoka. Why not take the time to swing by this information hub where you can enjoy the delights of Tsuruoka cuisine?