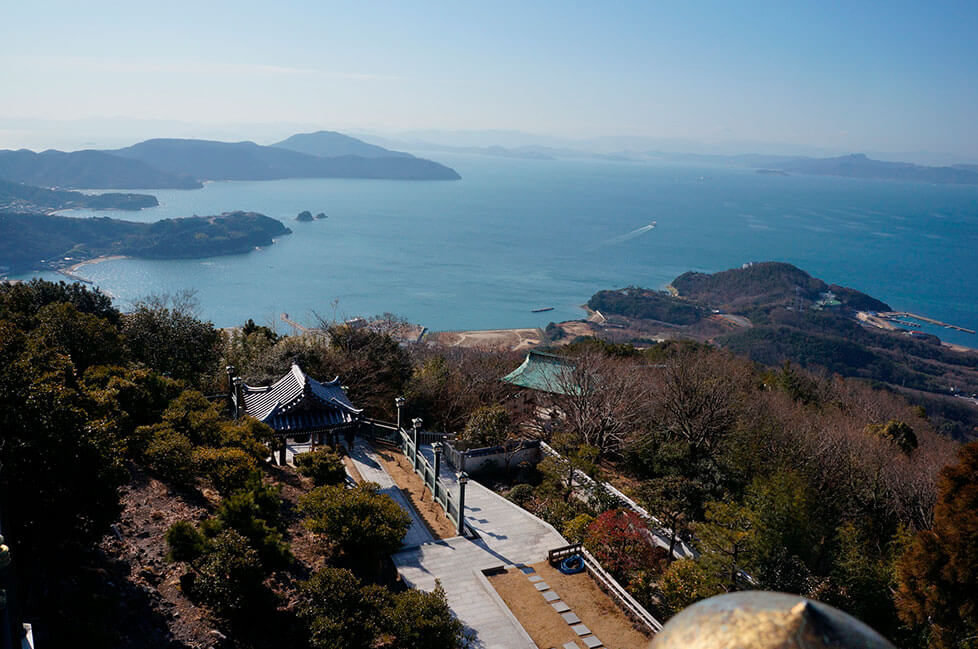 While many may know that Greenland is the largest island in the world, few know the fact that Japan consists of an incredible 6,852 islands. This is the number released in Japan Statistical Yearbook 1989, where the definition of ‘island’ is a body of land with a circumference is longer than 100m. In Setonaikai (the Seto Inland Sea) which separates three of the four main islands of Japan, Honshu, Shikoku and Kyushu, there exist 727 islands including the world famous island of art, Naoshima. According to Japan Coast Guard, the Seto Inland Sea is approximately 19,700km2; 450km in the east-west direction, and from 15km to 55km in the south-north.

The size is about a tenth of the Aegean Sea. Surprisingly, this inland sea had not existed until 6,000 years ago. Japan’s three main islands had been just one land mass. After the glacial age ended, the level of the sea continued to rise until the land separated into the three main islands we know today. Thus, the smaller islands in the Seto Inland Sea used to be mountain tops long ago. Through cruising in this small sea you would be able to have birds’ eyes flying among high mountains!

Shodoshima (Shodo Island) is the second largest island in the Seto Inland Sea. As there is no airport or inter-island bridge, the only form of public transportation is a ferry. However, it is not that difficult to visit this island as there are many ports which have direct ferries to Shodoshima, such as Kobe, Takamatsu, Himeji and Okayama. From Tokyo, a morning flight to Takamatsu Airport from Haneda is recommended. It is not a long and tiring journey. From Takamatsu Airport, there is a direct bus to Takamatsu Port where two types of ferries await you; a normal one (60 min.) and a high-speed one (30 min.) Less than three hours of travel from Tokyo will take you to the heartfelt island of Shodoshima.

Shodoshima, the Past and the Present

The history of Shodoshima can date back to the 8th century, when the oldest extant chronicle, Kojiki, was composed. It is a collection of myths about the creation of Japan by deities: a couple of deities created eight large islands and then six small islands, amongst which Shodoshima was nominated. This could mean Shodoshima was already inhabited and recognized by the government at that time from a practical point of view, leaving aside the authenticity of the myths. In fact, Shodoshima belonged to Imperial Family from the beginning of the 9th century to the mid-14th century. From the 16th century, it was directly ruled by the Tokugawa Shogunate as it was strategically important for the navigation route in the western part of Japan.

A popular assumption is that “people in islands tend to be not open to experience and extroversion”. However this cliché does not apply to the people of Shodoshima. With the flow of people and merchandise coming and going, they have been very innovative and regularly receive many outsiders. In Japan, Shodoshima is often called the island of somen noodles, soy sauce and olives, which are their main local specialties. If you see these iconic products for yourselves, you will be able to further understand what kind of island Shodoshima is.

In the late 16th century the islanders who came back from the pilgrim tour in Ise Shrine (Mie Prefecture) brought the technique of making somen (a kind of udon noodles but very thin like Italian capellini). On the way to Ise there is a village called Miwa (Nara Prefecture) where somen production is famous. Since then Shodoshima has been one of the largest production areas of somen.

In the 17th century when the Castle of Osaka was being reconstructed, people gathered in Shodoshima to extract building stones in quarries, as Shodoshima had high-quality granite and it was easy to carry away by boat. People who came from an area now known as “Wakayama” brought their local soy sauce. Shodoshima islanders were inspired by the fascinating taste of soy sauce and they decided to visit Wakayama to learn how to make it themselves. In Shodoshima they had salt from the sea and their climate was as mild as that of Mediterranean, which was perfect for the fermentation process for soy sauce making. Since then Shodoshima had been one of the biggest producing areas of soy sauce until the 20th century. In their golden age, in the 19th century after the modernization of Japan, about 400 producers were active.

Olive trees, on the other hand, were brought to Shodoshima by the Ministry of Agriculture in the beginning of 20th century. Shodoshima was selected as one of the places to trial olive trees imported from the U.S. and only the trees planted here successfully bore fruit. Somen, soy sauce and olives are the local products of Shodoshima even now. They were made by the locals who have always been open to new challenges and with a help of its Mediterranean-like mild climate.

“I felt the warm and welcoming atmosphere when I stepped out from the ferry boat for the first time. I even felt as if I heard the voice of welcome in the air!” said a tourist who fell in love in Shodoshima. This island has attracted so many people from outside in its history and recently more than 250 people, which is 1% of the total population of the island, migrate to Shodoshima every year, according to an organization promoting migration. “Old and new” residents of all ages love and are proud of their island and enjoy their lives, which could remind you of the famous act of Borélo. A female dancer starts to step in a tavern in Spain, setting up the melody. At first she is accompanied by a single instrument, but gradually the number of musicians and dancers increases until everyone is involved and the music is played with a full orchestra.

The Introduction of the Island Focusing on Each Aroma

Traveling around Shodoshima is easy as it is a small island of about 150km2 and its circumference is only 126 km, even though it is the second largest in Seto Inland Sea. If you don’t want to drive by yourselves, Olive Bus covers almost whole area of the island and will serve for your travel (but only if you pay close attention to time schedule of buses!) Shodoshima is a cow-like shaped island, with its head facing the West. Each part of the body has its own characteristics and its own aroma. If you go around the island, you may notice that the aroma brought by the breeze is different from area to area. We would like to introduce Shodoshima to you focusing on the aroma. 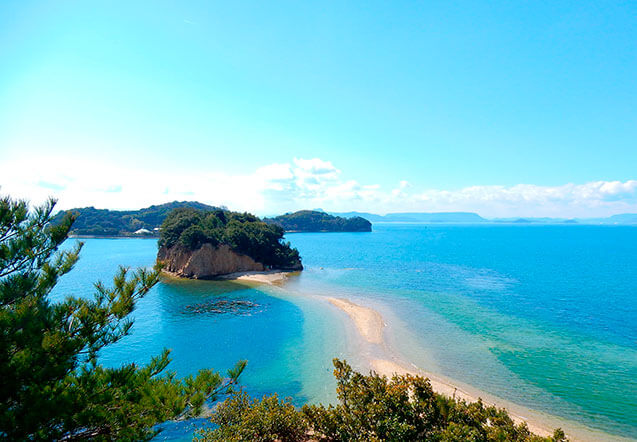 At the head part of the cow-shaped island, there is also a famous tourist attraction called Angel Road about 2 km toward the island’s throat. It is a narrow path that appears only during the low tide. It is well known as a date spot and it said that if you walk on the path with your beloved one holding hands, angels will make your wish come true. Believe it or not, if your visit to this place at daybreak or during the sunset, and if you see this path, you are already lucky enough. If you don’t want to depend on your luck, it is better to check the time of low tide beforehand.

The Aroma of Olives 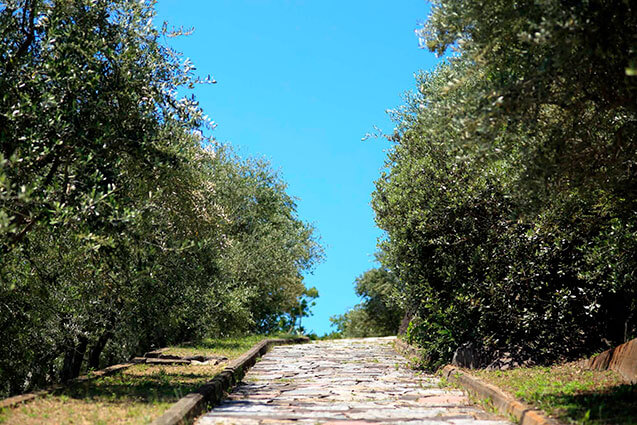 The area from the breast to the stomach of the cow-shaped island can be defined as the “olive area” and there are many olive related places, such as forests, parks, shops and small factories. As about thirty companies produce olive oil, table olives, cosmetics from olive, Shodoshima has the largest production of olive related products in Japan.

But don’t compare it to the world’s largest such as Spain, Greece or Italy because the size of the planted area and the history of cultivation are different. However, the great effort and research of farmers and engineers have made olive related products the island’s specialty. The high quality of the olive oil has been recognized by awards in international olive oil contests. Shodoshima’s olive oil has a delicate flavor that goes well with delicate Japanese cuisine. Cosmetics made from olive make skin moist and luminous like porcelain. 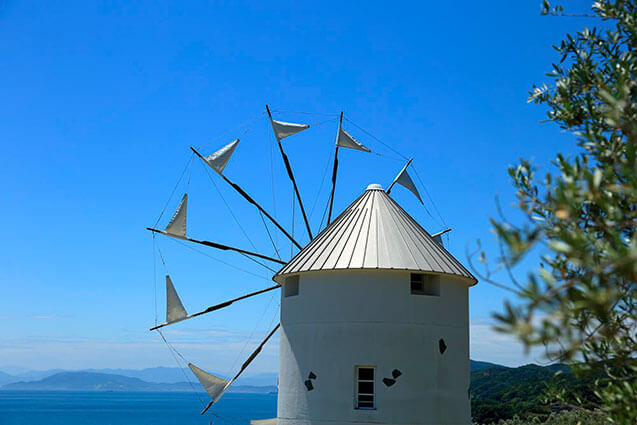 In Michi-no-eki Shodoshima Olive Koen (Roadside Station Shodoshima Olive Park), you will forget that you are in Japan with the wide-spreading clear blue sky, calm sea and brilliant green lawn, and a white windmill which was built as a symbol of friendship between Milos Island of Greece and Shodoshima. As there is a restaurant, shops, and information center, it may be a good idea to grasp the island’s olive culture and history in this facility. 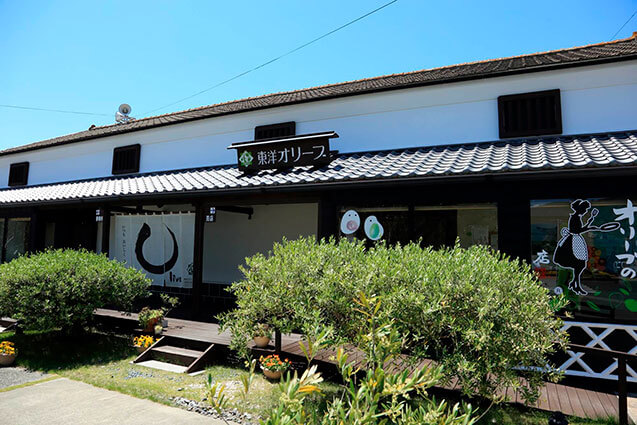 Toyo Olive Company, founded in 1955, is one of the leading olive related companies in Shodoshima. It produces various types of olive oil, table olives, cosmetics, confectionaries… and many more creative innovations! Shopping in an in-house store is very fun. You can select your souvenirs after tasting each of the products. On weekdays during the season (in November and December), a free factory tour is available with advance reservation. 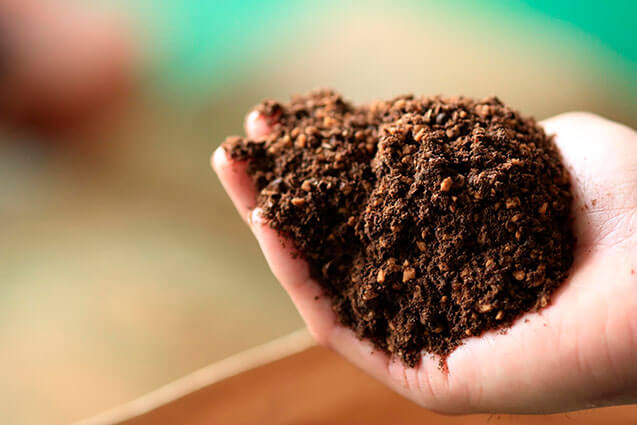 The olive residue, which is high in polyphenol and oleic acid, is not thrown away but recycled as feed for cattle. The livestock that eat this feed receive many health benefits from this nutritious diet and are known as "olive cattle". 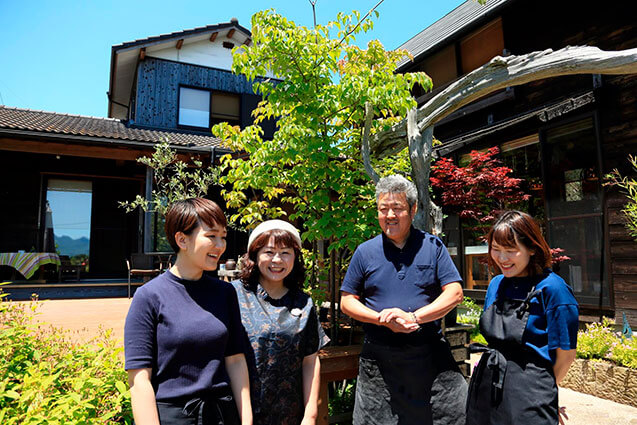 If you want to taste local cuisine of Shodoshima with olive oil, a small family-run restaurant, Nonoka, is where you should go. The chef, who has dining experience in a hotel, opened Nonoka in 1995 with his wife. Women in the island had scarcely dined out with their female friends. Their motivation of opening their own restaurant was to change this island’s custom and they succeeded to let women go out for lunch.
To entertain the local women, they started to offer a set menu in a beautiful lunch box also to attract their eyes. Their lunch box is like a ladies’ jewel box or a box of chocolates with various kinds of foods cooked in various ways in a small portion. Even a lady who eats like a bird can enjoy her gorgeous lunch.

As time goes on, the reputation of Nonoka has been passed onto visitors and it has since become a very popular restaurant which represents the island. “I want many people to taste our olive oil. We grow olive trees and handpick the fruits. We also make the oil with a public press machine by ourselves!” says the proprietress. Here, you can taste Shodoshima’s delicate olive oil used in a local delicate cuisine. 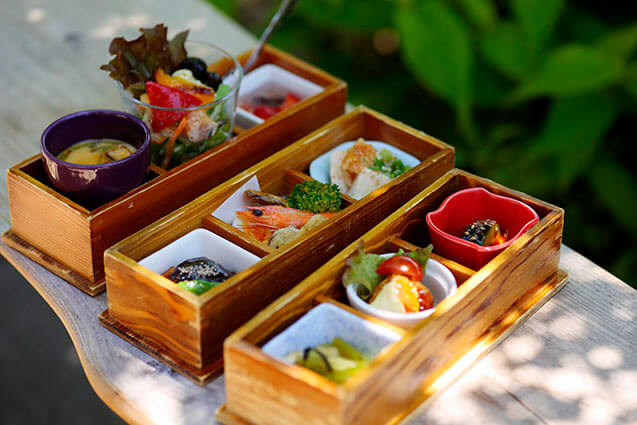 The Aroma of Somen Noodles Being Sun Dried 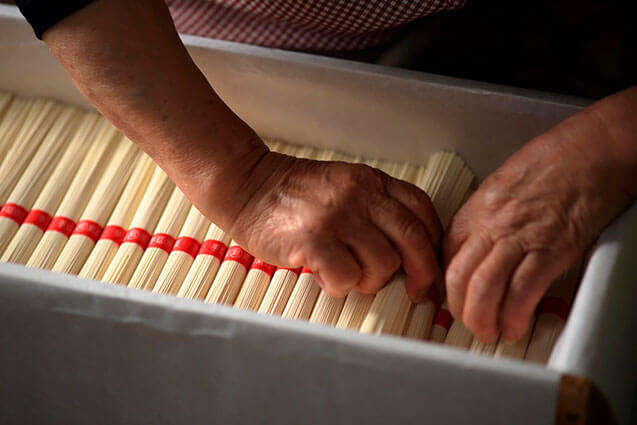 In this area there is one more important production for Shodoshima: Somen production. Somen have been made by small family-based makers in the island and sold by the association under the brand name, Shima no Hikari (Light of the Island). What makes Shodoshima’s somen so special is its production method (which has been kept for 400 years) called tempi-boshi (sun-drying) and the use of sesame oil. The ultraviolet light of the sun makes somen white. First, wheat flour, salt, and water are mixed together and kneaded into dough upon which sesame oil is applied.

The dough is not lengthened by hand into long and thin noodles, nor pressed out from a metal tip, but by twisting and stretching several times, and then sun-dried until the noodles mature. If you are lucky enough to see when somen are sun-dried, you will detect the scent of the wheat flour and sesame oil. Somen is not made during summer time, even though the summer is the best season for consuming somen served cold! 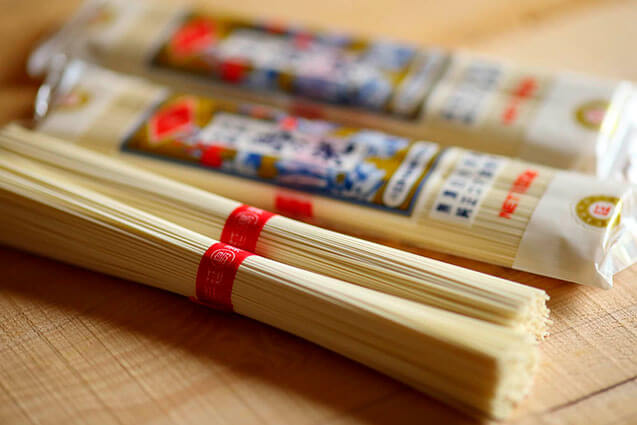