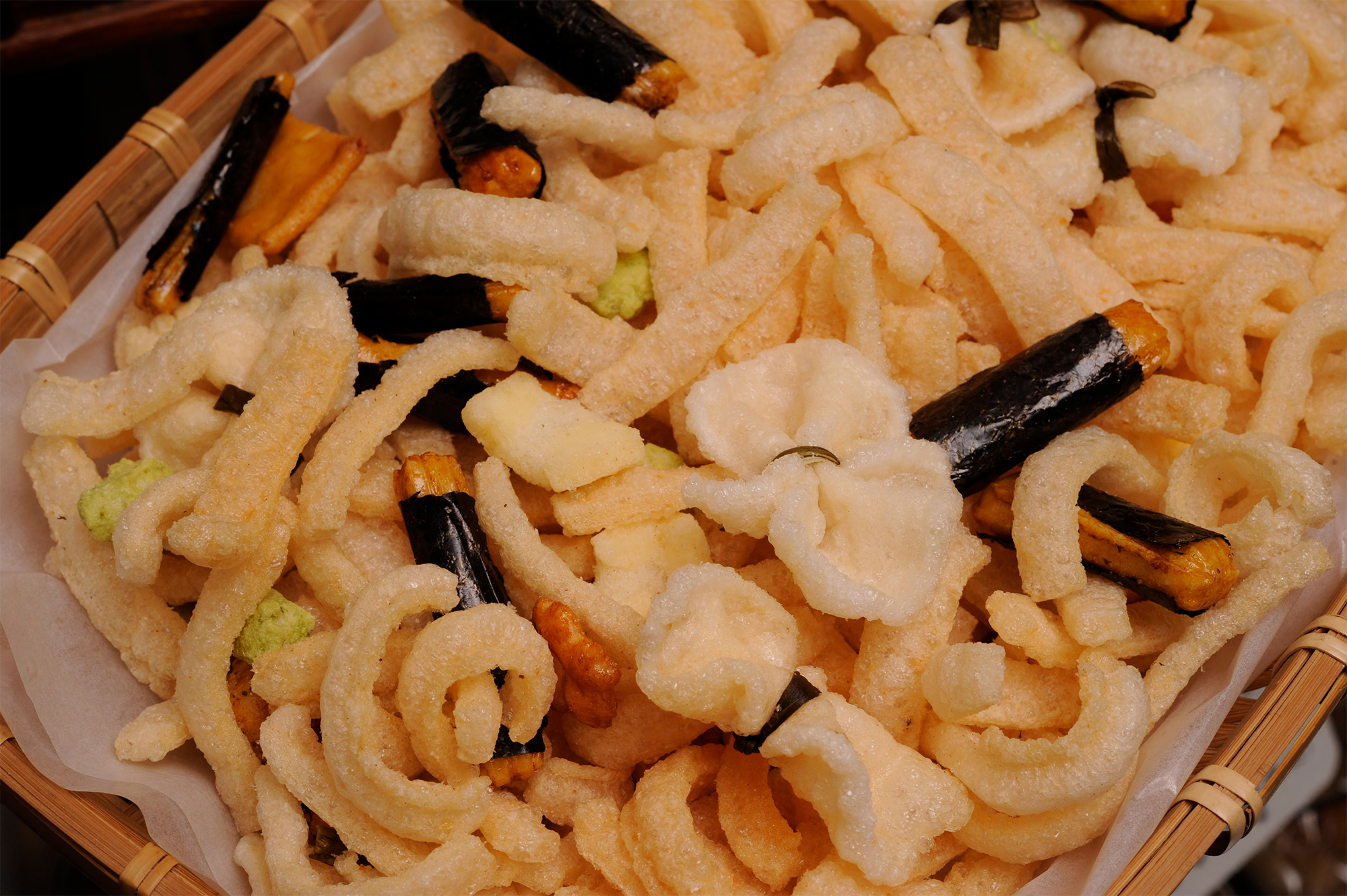 A medley of nine distinct flavors and shapes, Edo Miyage is Shinseido’s signature product, and a snack that’s hard to put down. Light in color with a delicate flavor, the ebisen shrimp wafers are made from the tender meat of tiny shelled prawns. ￥1,080 per 140-gram bag

Warning—the crunchy mix of flavors in Shinseido’s “Edo Miyage” assortment of rice wafers is highly addictive! As fun to look at as they are tasty to eat, these ultimate party or bar snacks are light and healthy, too. This month we visit with Takeshi Sumie, Shinseido’s sixth-generation owner.

Shrimp-flavored ebisen rice wafers originated in the Mikawa Bay area of Aichi Prefecture as a way to make use of smaller prawns, for which there was little demand. The meat was minced, mixed with starch, formed into wafers, and roasted. The idea caught on in Tokyo, or Edo as it was known then, and soon a number of ebisen and other shrimp specialists began operating in the Irifune area near Tsukiji. We ourselves were located there until 1964. 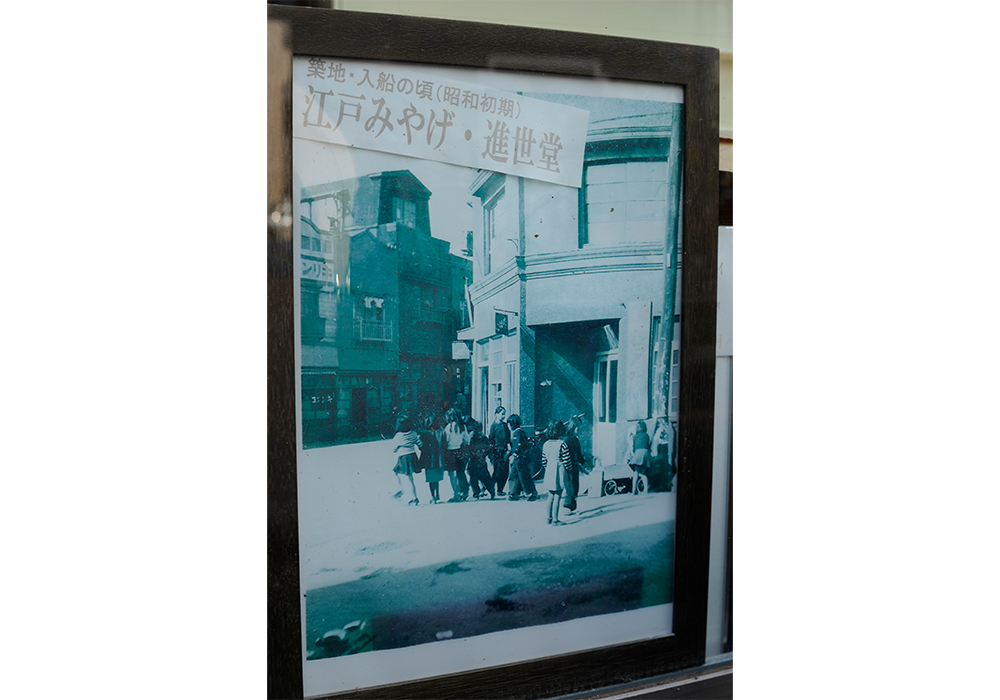 Shinseido as it appeared in the early 20th century. 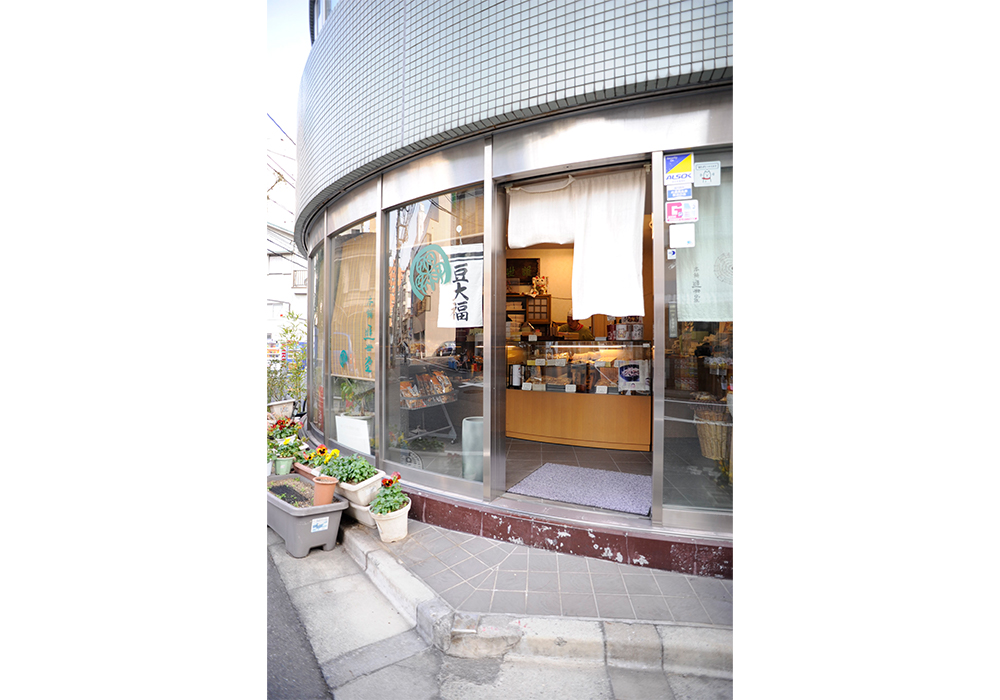 Though its business is well over 100 years old, the shop today maintains a modest size and approachable atmosphere.

“Edo Miyage,” our most popular product, is an assortment of nine kinds of rice cracker: ebisen, tea-flavored chakin, seaweed-wrapped norimaki, chisel-shaped tagane, deep-fried agemochi, pebble-sized sazareishi, butterfly-shaped kincho tied in the middle with kombu, and soy- and sesame-flavored bits. People often ask why our ebisen aren’t pink in color; that’s because we shell the prawns before processing. We mostly use akaebi velvet shrimps from the waters off Aichi’s Chita Peninsula and takatsume shrimps from the Seto Inland Sea. They’re tiny, no more than two centimeters in length, and it’s a lot of work shelling them.

But the effort is well worth the delicate flavor and texture. After shelling we mince the meat, add flour, and roll it out. This is roasted, cut, and dried, a process that’s easiest now in the cold dry days of winter. All of this is done in Aichi. Here in Tokyo, we fry the wafers according to demand and prepare them for selling. 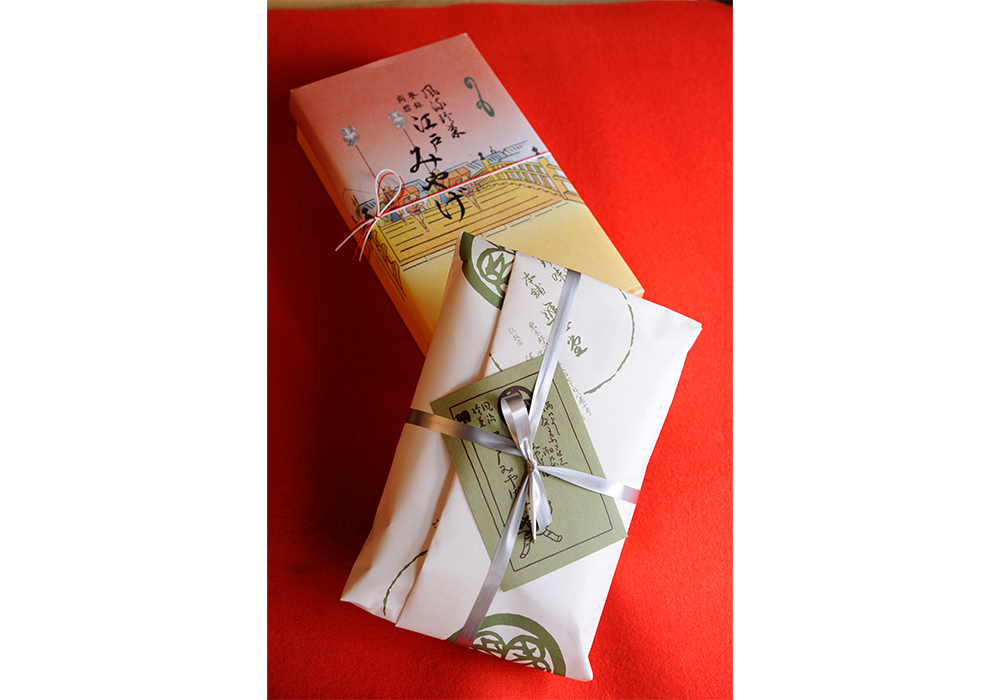 Retro-modern: purchases are boxed or wrapped in paper and tied with a cord. 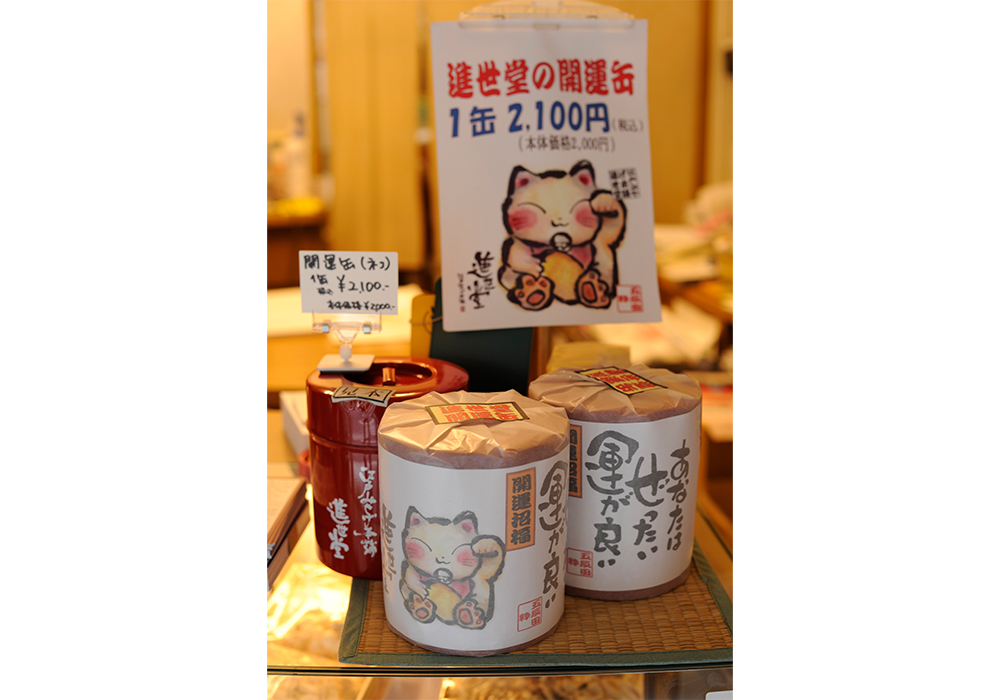 The popular red tins are believed to bring good luck. “This year that’s especially true if kept in a south-southwest corner,” quips owner Takeshi Sumie.
*The info is as of March 2013.

We use the same high-quality cottonseed and white-sesame oils favored by the best tempura shops, but fry at a slightly higher temperature. A careful eye and quick hand are required to keep them from browning. Finally, we use a centrifuge to remove excess oil. Our ebisen recipe has been so carefully refined over the years that there’s little we can do to improve it—it’s perfect the way it is. But the other snacks in Edo Miyage we experiment with all the time, always trying to make them better.

We use Shimehari glutinous rice, an heirloom strain that dates back to the early 20th century and was recently restored. The kernels are small in size, but very sweet. This is grown for us on terraced fields in Niigata Prefecture using methods developed by Terukichi Nagata, an agriculturist who figured a way to use less water and fertilizer to yield flavor-rich crops. 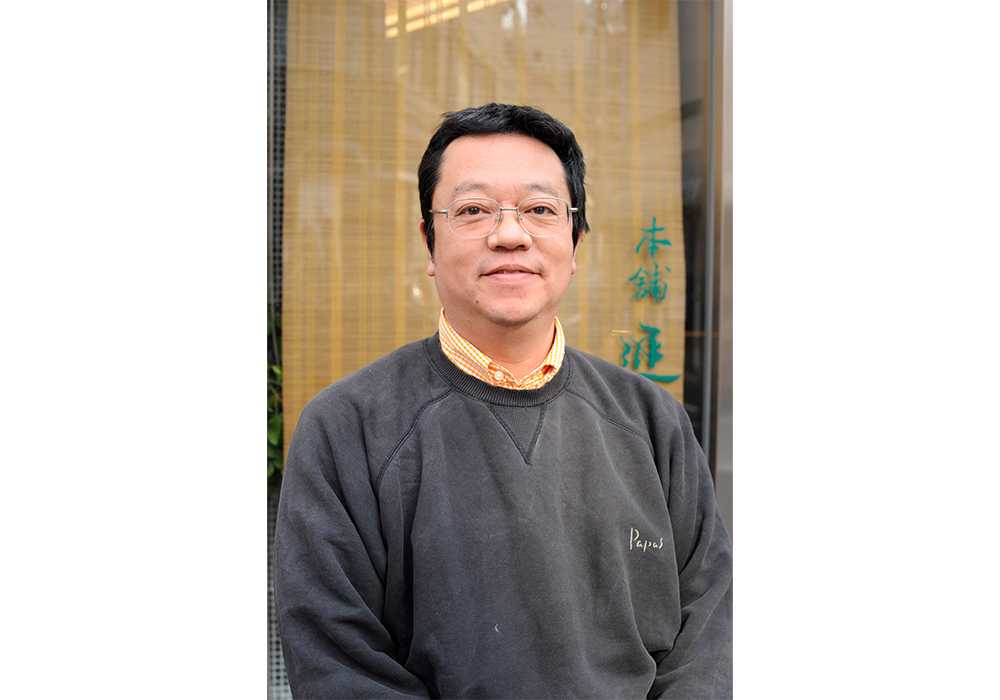 “Our products are the same year-round, but we keep things lively by offering seasonal fruits grown by our suppliers,” says Sumie. Each winter the shop offers freshly pounded mochi rice cakes for the New Year’s holiday. 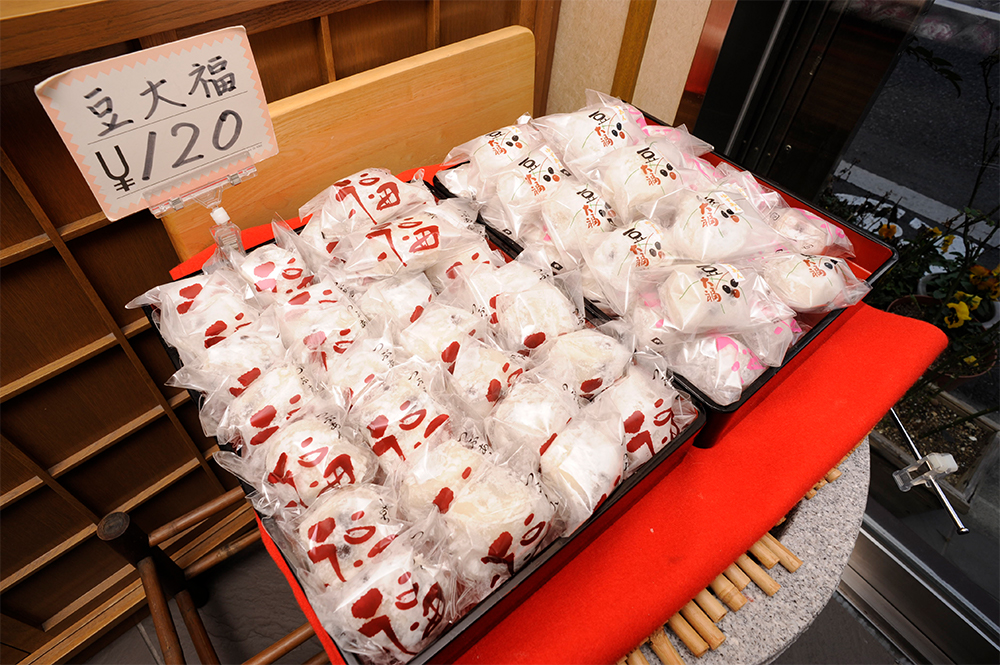 Rice cakes filled with sweet bean paste are a standard offering; in the winter a fragrant yuzu (citron) version is added; ￥130 each.