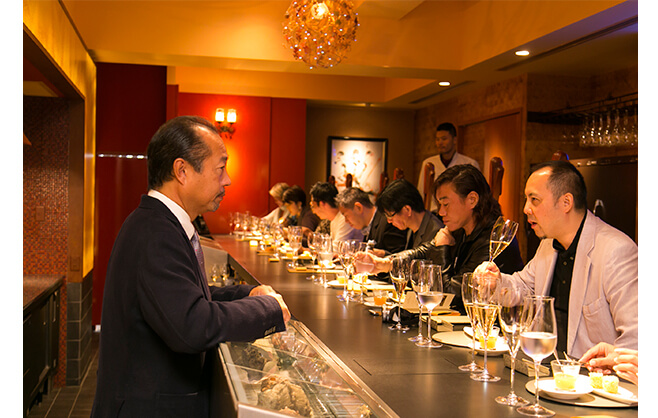 Shinya Tasaki himself stands by to offer in-depth explanations about each vintage, the dishes and his aim with the pairings.

An intimate event designed to experience the allure of champagne was held at restaurant “S＋”in Atago, Tokyo on a recent brilliantly sunny Sunday afternoon. The title of this special lunch planned by host and sommelier Shinya Tasaki was “LE& Gathering with Shinya Tasaki.”

“LE&”included in the title, is the name of a sensory-style pop-up restaurant which was open from June 9 to July 9, 2014 in the Champagne region of France and sponsored by Moët & Chandon. Its maverick methods and avant-garde creations have now become the stuff of legend. “The Cuisine Magazine, October, 2014 issue” and this Web Cuisine Magazine feature the event and, for your reference, please read the articles.

Shinya Tasaki was one of attendees to “LE&” visiting the home ground of Moët & Chandon and planned this special lunch with a passion with the goal of sharing the fabulousness of LE& again with friends that were also lucky enough to participate in that spectacular event. For Tasaki, it would be a kind of LE& reunion, as the guest list made up those who experienced “LE&” along with Tasaki, including Hajime Yoneda of “HAJIME,” Akira Watanabe of “AW Kitchen,” Yuji Saito of “Orexis,” Naoto Kishimoto of “L'EMBELLIR,” and Kenjiro Hashida of “Hashida Sushi, Singapore.” 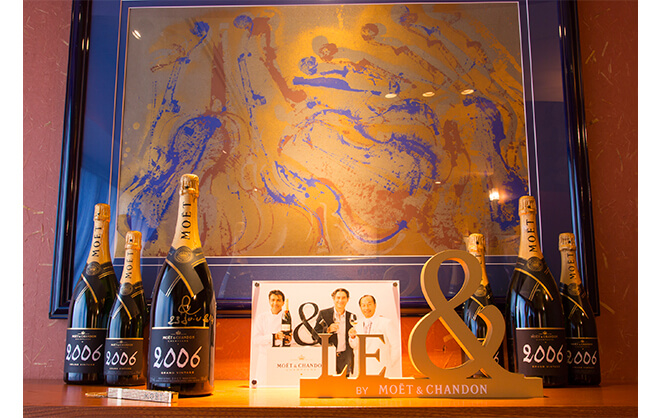 A photo displayed in the aperitif corner shows Shinya Tasaki who visited Epernay and experienced “LE&” In the center is Benoît Gouez, Chef de Cave at Moët & Chandon, and at left is Chef Yannick Alléno. Participants who shared the experience with Tasaki arrived one after the other as the party began.

With everyone finally gathered together, they enjoyed a toast with “Moët Impérial”and savored the happy reunion with the mellow bubble of the champagne. After everyone was seated, the feast began in earnest. Four kinds of Amuse (appetizer) paired with “Moët Impérial” were served: “Macaroon of foie gras” flavored with yuzu; “Oasis of Nagara River,” ayu with Bodhi Tree-flavored espuma; “Braiser of camel’s hump” for which a mushroom with good earthy aroma was used; and “Tartar of marine turtle” with spice essence. “The aroma of each dish is harmonized with the essence of the scent of Moët Imperial,” explained Tasaki. 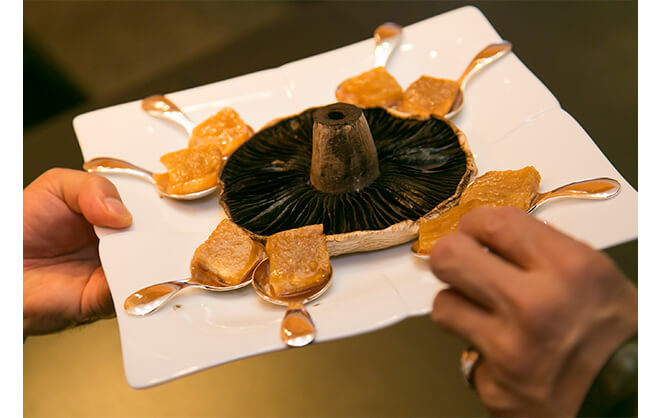 “Braiser of camel’s hump,” one of the amuse. Guests gasped in surprise at the novelty of the ingredients. A mouth-wateringly delicious camel hump braised with the extract of a jumbo-size mushroom spoke of the sensual with its earthy aroma, evincing a sigh of pleasure from assembled guests.


For the champagne “Grand Vintage 2006”poured next, “Crème brûlée of quail” was served. Tasaki explained: “I conceived of a dish that could meet the powerful ebb and flow of the Grand Vintage 2006,” creating a harmony between the richness of double consommé and the 2006 that was almost palpable in its sensuality. The main dish, “Pot-au-feu of pedigree Agu pork,” was paired with Tasaki’s treasured “Grand Vintage Collection 1996.” Guests were surprised by the unusual paring between champagne and richly-flavored pork, but the balance of oxidative aroma and reductive one of the Grand Vintage Collection 1996 was fused admirably with the wild taste of pork. No one at the dinner table could resist sighing in admiration between bites. 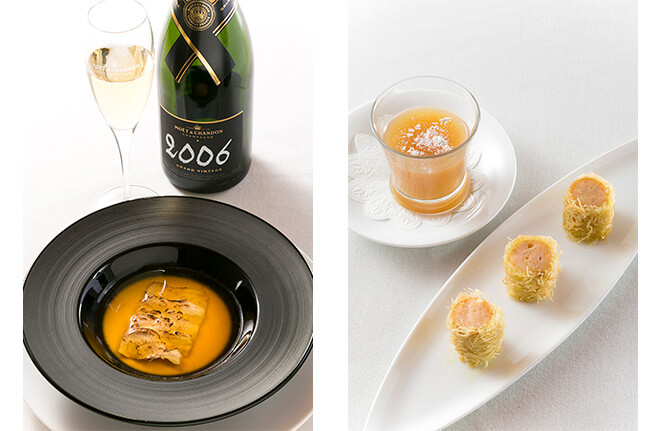 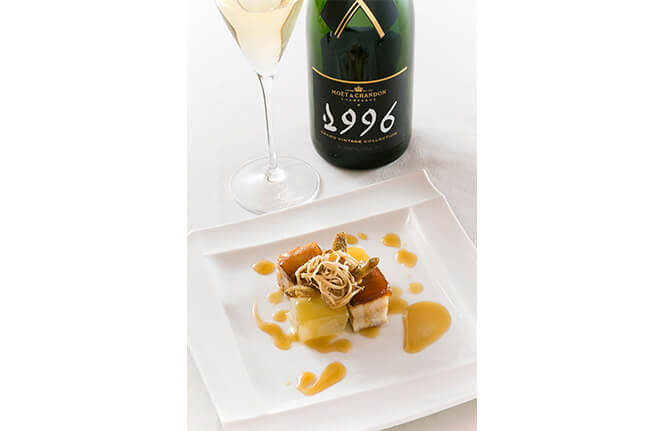 “Pot-au-feu of pedigree Agu pork” was the main dish created utilizing a precious native variety of Okinawan pork in which only two pigs are shipped monthly, and wax gourds. Tasaki stated the “Grand Vintage 1996” paired with it had reductive aroma due to natural oxidation. The rich aroma encompassed even the thick umami of the pork.


The essence of LE& is the spectacular pleasure of Moët & Chandon exploring the future of our sustainable five senses. With his knowledge and playful spirit riffing on this theme, Tasaki and LE& might succeed in leading guests to a new dimension of taste, expanding their five senses by gathering and enjoying a shared experience around a bottle of champagne. What new discoveries behind LE& await us next time? 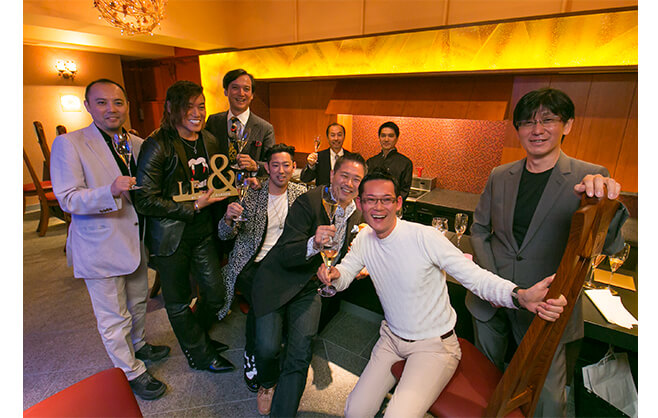 Guests were greatly pleased with the depth of Grand Vintage and Tasaki’s splendid treat. It seems the excitement didn’t stop even after finishing the dinner. Men rear center: Tasaki and Akira Maeda, grand chef of S＋

Vol.1 A new taste and experience pioneered by Moët & Chandon（September 29, 2014）