Getting to Know Hanamaruki Liquid Shio-Koji 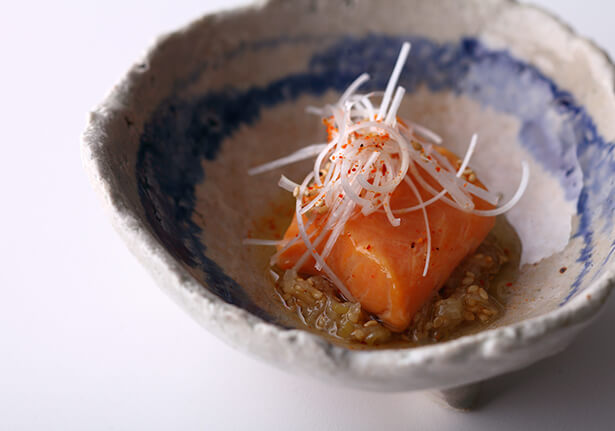 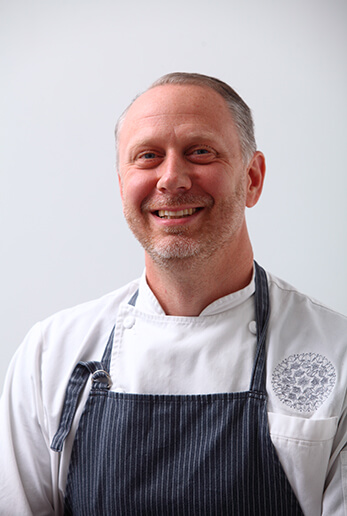 Kyle Connaughton
Chef, cookbook author, and culinary educator. After experience at several restaurants such as a Japanese restaurant in Southern California and the Dining Room at the Ritz Carlton Huntington Hotel, in 2003, Connaughton received an offer to work as a chef for the Three Michelin Star restaurant, Michel Bras, at a new second location in Hokkaido, Japan. In 2006, he joined Heston Blumenthal to open the Three Michelin Starred Fat Duck Restaurant and joined as The Fat Duck Experimental Kitchen Head Chef of Research and Development. After that, he became a consulting culinary educator for the Culinary Institute of America, and in the autumn of 2015, opened SingleThread Farm-Restaurant-Inn located in Healdsburg, California.


An International Chef’s History with a Traditional Japanese Fermented Ingredient


“My first encounter with shio-koji was 20 years ago when I was learning about Japanese food culture. Shio-koji is a mainstay in Japanese flavoring, on par with soy sauce and miso. It is made by fermenting a mixture of koji (rice malt), salt and water. I was drawn in by its mild saltiness—it doesn’t have a strong flavor like soy sauce, but rather is meant to support the flavor of the other ingredients. These past 4-5 years, I’ve been using shio-koji in dishes in place of white soy sauce, one of my favorites to that point. Recently, however, I just thought of it another ingredient, meant to add flavoring.”

Through repeated experiments, I found advantages to using Hanamaruki Liquid Shio-Koji one after the other. The key was the enzymes in the rice malt. Normally, enzymes are killed when heat is applied to them. Conversely, the no-heating methods used to produce Hanamaruki Liquid Shio-Koji keeps the enzymes live, and live enzymes mean high protease activity (proteolytic enzyme activity to break down proteins) and function in a variety of ways that make it ideal for fish and meats.

Take smoked salmon, for example. Generally, the fish is sprinkled with salt or soaked in saltwater before smoking. This draws out the moisture, but also lets the protein escape and has a tendency to leave the entire fish whitened. But say we try soaking it instead in Hanamaruki Liquid Shio-Koji. The fish retains its moisture, leaving the rich flavor of the salmon and giving it a lovely glaze. With the moist surface, it complements smoking very well.

Soaking meats also leads to some interesting discoveries. Soak hamburger patties or pre-minced beef in Hanamaruki Liquid Shio-Koji for three hours and they will come out with a complex flavor like that of aged meat. The protease acts on the meat basically the same as aging does. It’s surprising how you can get the same effect as the timely, expensive process of aging meat so quickly and easily! Before oven roasting, just soak you whole chicken in Hanamaruki Liquid Shio-Koji for juicy, succulent meat and a great browned color. 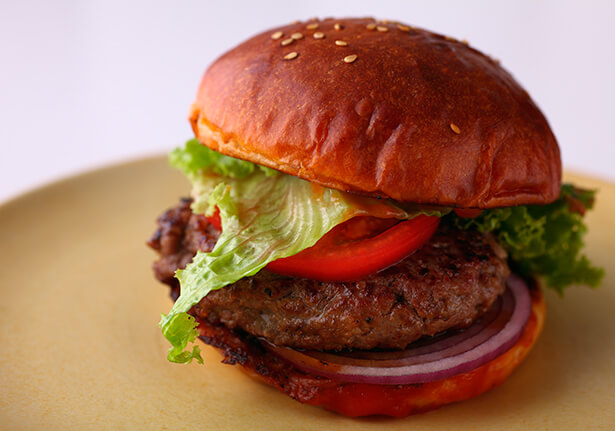 “Of course, Hanamaruki Liquid Shio-Koji works with more than just fish and meat. Toss lightly onto some fresh tomato or cucumber to bring out the true flavor of the vegetables. Especially for fresh vegetables that have been raised by hand, we want to get as much of their inherent flavor as possible. Even with vegetarian dishes, sneak in some Hanamaruki Liquid Shio-Koji and awaken the natural flavors from within your ingredients to create complex flavors with depth.” 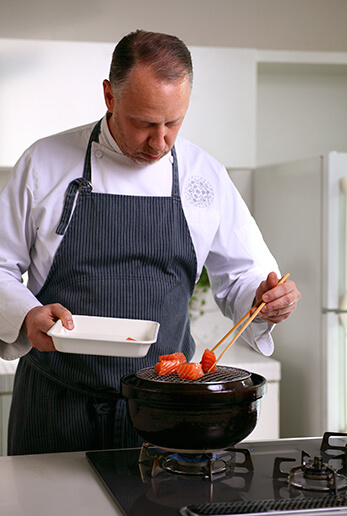 An Exciting Ingredient of Unknown Potential

“Given the advantage of being liquid, it is also effective when used with breads and pastries. It can be mixed uniformly into the ingredients for an even spread of flavor without any concerns for disrupting the taste. I used it once in bread in place of salt, and the bread came out soft and moist with a gloss to the surface. You can try it with caramel, or chocolate... the possibilities are endless.

In recent years, the world's top chefs have started to recognize fermented condiments used in Japan, such as soy sauce and miso. They are charmed by the characteristic flavor not found in western ingredients—some make their own original misos with fava beans or pistachios, and some even make their own soy sauce. These chefs are taking totally different approaches than those taken in Japanese cuisine to search out the potential of these ingredients. Hanamaruki Liquid Shio-Koji is destined to be recognized as another exciting ingredient with interesting uses and effects to discover with every experiment. Don't get hung up on the preconceptions, and try it out for yourself. It'll open up unlimited culinary possibilities.” 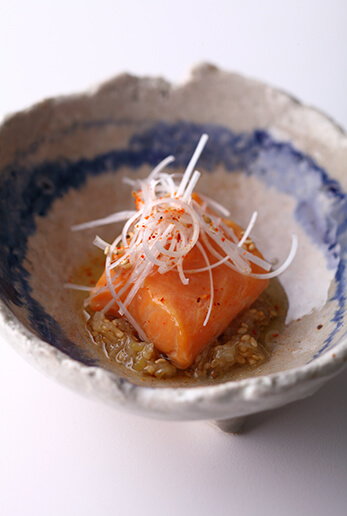 Soak the salmon in Hanamaruki Liquid Shio-Koji for four hours, then smoke in an earthenware pot. The ginger and green onion sauce will bring together the full, fleshy flavor of the salmon that fills your mouth. 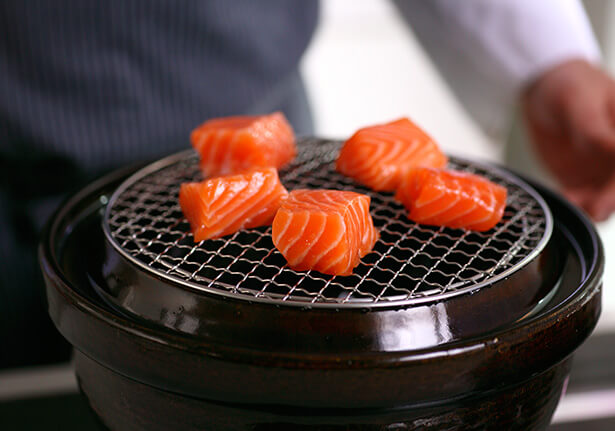 Advantage 1: Soaking gives ingredients a glossy coating!
Hanamaruki Liquid Shio-Koji Is perfectly suited as the seasoning for meat and fish. The meat can soak evenly given the liquid form. Soaking salmon for a few hours gives it a glossy coating. 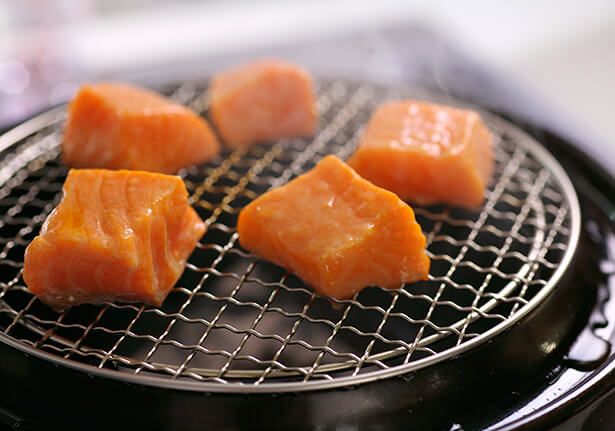 Advantage 2: Drawing out the inherent flavor of salmon is the perfect complement to smoking!
Full-flavored salmon, smoked. Soft enough to melt to pieces in your mouth, the sweetness of the salmon and the smoked flavor spread throughout your mouth. As Chef Connaughton says, “it goes great with smoking.” 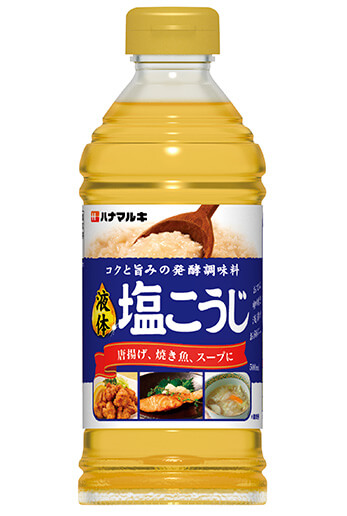 
■For more information on this product
Hanamaruki Foods Inc.
http://www.hanamaruki.co.jp/english.html